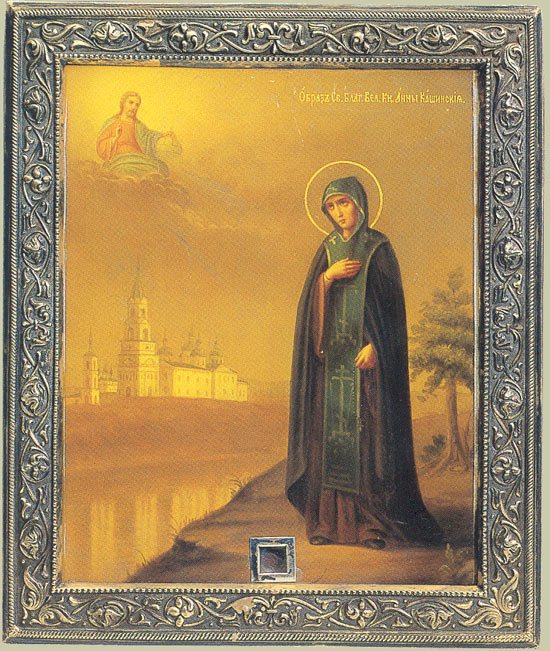 Anna was a daughter of Prince Dmitry Borisovich of Rostov and a great-granddaughter of Prince Vasily of Rostov. From her earliest years, Anna was brought up strictly Christian. She was taught the virtues of humbleness and obedience. Her teacher was Saint Ignatius, bishop of Rostov (d. 1288), who was noted for strict selflessness and pacifism. Like all royal daughters of her time, Anna learned different kinds of needlework. When the princess grew up, Princess Xenia of Tver, second wife of Grand Prince Yaroslav of Tver sent ambassadors to Rostov with a request to marry Anna to her son Mikhail of Tver|Mikhail. The embassy was successful, and Anna became the wife of Prince Mikhail.

Princess Anna's marriage to Prince Mikhail took place on in the Preobrazhensky cathedral of Tver. In celebration of this event, dwellers in the city of Kashin built the Mikhaylovsky temple and the triumphal gates from the local to the Tver road, naming the gates also "Mikhaylovsky." In the Kashin Uspensky cathedral a special Feast was established and celebrated annually on 8 November.

In 1294, her father died, and in 1295 a terrible fire destroyed Tver. Soon after that, Anna and Mikhail's first-born daughter, Feodora, fell severely ill and died in infancy. In 1296, another fire destroyed their palace, and the prince and princess were barely rescued. In 1317, a war began between her husband and Prince .

In 1318 the princess said goodbye to her husband forever, who was summoned to the Horde, where he was brutally tortured to death on . Only in July of the following year did Anna hear about her husband's martyrdom. Learning that Mikhail's remains had been brought to , she sent an embassy there, and her husband's body was transferred into Tver and buried in Preobrazhensky cathedral.

In 1325, her eldest son, Dimitry, was tortured in the Horde. In 1327, her second son, Alexander, broke the Tartar army, which devastated the duchy. In revenge gathered a new army and destroyed Tver; Prince Alexander was forced to hide in . For ten years, Anna did not see her son, and in 1339 Prince Alexander and his son Feodor were killed by the Horde.

After the death of Prince Mikhail, Anna carried out an old desire "in silence to work only for God." She took vows in Sofia's monastery in Tver and adopted the name Evfrosiniya. In 1365 the youngest son of the princess, Vasiliy, her only child remaining alive by that time, entreated his mother to move to his principality. The Uspensky monastery was built in Kashin, and there the saint accepted the schema with the name of Anna.

She died of old age on 2 October, 1368, and was buried in the cathedral temple of the Blessed Virgin.

The name of the Princess Anna was forgotten for many centuries. It was during the 1611 siege of Kashin by n troops that Anna appeared to Gerasim, Sexton of the Dormition Cathedral, and it is said that she prayed to the Saviour and for the deliverance of her city from the foreigners. Her relics were reported to work miracles.

The synod of the convened in 1649 and declared her relics worthy of a universal homage. The princess was glorified as a saint. Twenty-eight years later, Patriarch Joachim addressed the Moscow Synod with a suggestion to decanonize her because of the uncommon veneration and esteem for Anna among the .

It was traditionally thought the Old Believers chose Anna as their palladium because the princess was represented on icons as making the with two fingers, as the Old Believers practiced, rather than with three, as official church policy required after in 1656. However, writings used by the Old Believers show that one of the reasons they venerated her so highly was that her incorrupt body, on display, showed her hand in the two-fingered favoured by the Old Believers, vindicating their stance. Despite numerous efforts on the part of the Church authorities to "correct" the situation, her hand always went back to the same two-fingered position. In response, Patriarch Joachim removed the relics of Anna from public view.

According to a later study, however, the trigger for her decanonization was a life of Saint Anna, written by Saint Ignatius of the , one of the notorious leaders of the who preached self-immolations.

It was not until that the glorified Anna againand sanctioned a general celebration of her cult. That year a monastic community was dedicated to her in . A year later, a church was consecrated in her name in .