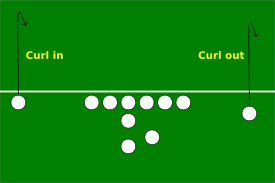 A Curl route, also called a button hook, is a pattern run by a receiver in American Football, where the receiver appears to be running a Fly pattern but after a set amount of steps or yards will quickly stop and turn around, looking for a pass. This generally works best when the defending corner or safety commits himself to guarding the fly and is unable to stop quickly enough to defend the pass.

The curl is a pattern used frequently by the West Coast offensive scheme, where quick and accurate passes are favored.