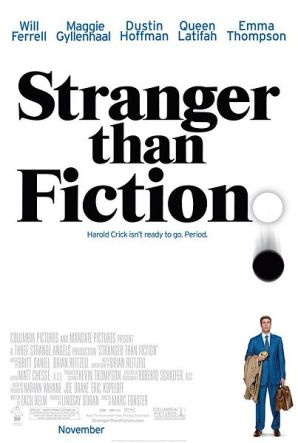 The film is directed by , written by , and stars , , , , and . distributed the film. [SONY Pictures Entertainment (2006). [http://www.webcitation.org/5Z75o18wk "Stranger than Fiction: Production Notes"] , document archived at WebCite 2008-07-06 based on the version posted at [http://www.visualhollywood.com/movies/stranger-than-fiction/notes.pdf this original URL] .]

Harold Crick () is an for the who is awakened alone each morning by his wristwatch. He is a compulsive counter and an obsessive time-saver. One day, Harold begins to hear the of a woman who is omnisciently narrating his life. Harold attempts to communicate with the voice, but soon realizes the speaker does not know that he can hear her. During the same day, Harold is assigned to audit an intentionally tax-delinquent baker, Ana Pascal (). In spite of his ethics, Harold becomes attracted to her. Later that afternoon, Harold's watch stops working while he is waiting for the bus. Harold resets his watch to a time given by a bystander and hears his narrator remark "Little did he know, that this simple, seemingly innocuous act, would result in his imminent ." [Stranger Than Fiction directed by Marc Forster and written by Zach Helm. Time of quote: 0:21:10 &rarr; 0:21:17]

Interspersed with Harold's experiences, we meet the narrator - chain-smoking, reclusive, self-absorbed author Karen Eiffel (). Suffering from , she tells her new assistant Penny () she is unable to come up with a suitable way to kill Harold Crick (she does not know that he is a real person, instead only aware that he is a character in her new book). Over the course of the movie, we see her imagining several possible deaths (all of which peripherally involve a boy on a bicycle and a newly hired bus driver.) She also visits a hospital , where she despairs that the people there are merely "infirm", and demands to see the patients who are dying. Anxious at the ominous narration, Harold sees a () who attributes the voice to . However, after Harold insists that schizophrenia is not the case, the psychiatrist recommends he visit a literary expert. Harold then visits Jules Hilbert (), a professor at a university, for advice on how to change his apparent . At first, Hilbert is also convinced that Harold is crazy, but is intrigued to learn that the narrator had begun by saying "Little did he know..."; implying that she knew more than Harold knew. Hilbert interviews Harold and decides he must first properly ascertain the of his story. He declares that to understand literature, one must generally choose between two faces of the human story: or .

Harold returns to Ana's bakery, where by her actions, she ensures that the audit is an unbearable experience for him. At the end of the day, she bakes him a batch of cookies, insisting that he eat some while explaining that she had dropped out of to bake cookies, because she feels that her positive imprint on the world would be through baked goods. She pleads that he take the remaining cookies home, but Harold rejects this offer, because it constitutes for an auditor (or possibly because that would change one of the answers he gave Hilbert during the interview), and insists on purchasing them instead. Ana, offended by the idea, tells him to go home. Harold realises that she was being nice and had made the cookies just for him. He sadly concludes that he's screwed up his chances with her and he's in a tragedy.

Harold attempts to find out if he truly is in control of his own by staying at home and not performing any action which might bring an untimely death, on the grounds that if he controlled the outcome, nothing would interrupt him. The experiment is interrupted when a demolition crew mistakes Harold's apartment building for an abandoned building and attempts to tear it down. Learning of this latest development, Hilbert feels that Harold's death is unavoidable and tells him that instead of trying to prevent the death, he should spend his remaining time fulfilling his dreams. Taking Hilbert's advice, Harold begins to live his life as he only had dreamed: he takes a lengthy vacation; he rekindles a desire to play the , ignores the numerical measurements of his actions, and mutually pursues and courts Ana (she bakes him cookies, and in return he buys her a variety of s), who overcomes her antagonism for him and responds passionately. This last leads Harold to suppose that his story is a comedy, wherein the protagonists' feelings of hatred for each other change into affection.

At Professor Hilbert's office, as they are trying to identify the author of Harold's story, Harold notices on the TV a 10 year old interview with Karen Eiffel, who is talking about her next book, "Death and Taxes". Harold immediately recognizes Karen's voice as that of his narrator. Hilbert, surprised, states that in every one of her books, the protagonist dies just as life becomes worthwhile.

Harold then begins a frantic search to find Karen Eiffel, eventually tracking her down through a -old IRS file. Harold telephones as she is typing the end of her novel, just as she adds the period to the line "The phone rang". Harold comes to the apartment and explains that he is the leading character of her story and that he does not want to die. Karen is stunned to learn that all she had typed has happened to a man living in her own realm of experience and is therefore horrified at the possibility that the cruel deaths she wrote for her previous protagonists had occurred to similarly real people. On the advice of her assistant Penny, she gives him the manuscript of the story, with the still untyped ending, and tells him to read it. Deciding that he cannot bring himself to read the manuscript, Harold gives it to Professor Hilbert to read first.

When Harold receives the manuscript back from Hilbert the next day, Hilbert says that the story is a masterpiece and cannot be changed. He adds that because death is inevitable, Harold should accept it now. Harold then gets on a city bus and spends all day there reading the manuscript. Upon finishing, he encounters Karen and tells her that he is willing to die this meaningful death. Harold then spends a night with Ana, whom he tells he adores; that all of the baked goods that she gives away can be written off as a charitable contribution; and that he will prevent her incarceration. He wakes up the next morning, prepared to face his destiny.

Karen calmly narrates his day. Coincidentally, his death is to occur on the same day that he expects to return to work after vacation. It turns out that after his watch had stopped, Harold unknowingly set it to run s ahead, based on the time that a bystander had told him. Instead of being exactly on time for the 8:17 AM bus, he arrives three minutes early — just in time to pull a little boy riding a bicycle out of the way of the bus, which hits Harold instead. The boy on the bicycle and the bus driver involved are the same that were seen peripherally during the scenes when Karen was fantasizing Harold's death.

Karen, meanwhile struggles to type the final words leading to Harold's death, going into hysterics after she types "Harold Crick was de". We soon learn that Karen decides not to kill off Harold Crick. She writes that he was saved by a piece of his that had became lodged in his during the crash, preventing him from bleeding to death. She claimed that the wristwatch was the protagonist that would die, rather than Harold. Ana comes to visit Harold in the hospital, where she sees that he has multiple broken s and is in traction. Karen later visits Jules Hilbert, and asks his opinion of her alternate ending. Hilbert replies that it was, "Okay, not great, but okay." In her defense, Karen explains to Hilbert that she could not bring herself to kill Harold; that all of her previous protagonists had been unaware of their demise, but that Harold was aware of it, and chose to sacrifice himself willingly. Even though his survival, in her opinion, is a weaker story, she cannot bring herself to kill him, because his selflessness is simply too worthy of life. She plans to rewrite the rest of the book to make this ending more sensible--her assistant asking the publisher for more time, something that the assistant had never had to do. Her own visit to Hilbert--something that, as a recluse, is entirely out of character--is a maturation similar to that Harold undergoes in his own life.

* - "Harold Crick", an IRS auditor, who thinks he is hearing his life as it's being narrated, causing him to seek professional help.
* - "Ana Pascal", a baker that Crick meets when he is sent to audit her.
* - "Professor Jules Hilbert", a literature professor who attempts to help Harold with his narration problem.
* - "Karen Eiffel", a famous writer and Crick's narrator who is known for killing off her protagonists.
* - "Penny Escher", an assistant to Eiffel whom her has hired to make sure that she completes her new novel.
* - "Dave", Harold's only real friend at work, with whom he stays after his apartment is partially demolished.

The film was shot in . Dave's apartment, where Harold takes residence after his own building is partially demolished, are the , designed by . Hilbert's office was in a lecture hall at the . The bakery that Ana Pascal runs is actually located in the neighborhood of and is presently called the "Catedral Cafe" [ [http://www.catedral.cc/index.html The Catedral Cafe] ] . Many downtown Chicago locations were used for scenes involving Karen Eiffel, Penny Escher, and Harold Crick. [ [http://www.imdb.com/title/tt0420223/locations IMDB: Filming locations for - Stranger Than Fiction (2006)] ]

The music for this film includes original scores arranged by the collaborative effort of Brian Reitzell (, soundtracks for "Marie Antoinette", "Lost in Translation", "The Virgin Suicides", and "Thumbsucker") and (singer/ songwriter of Spoon), as well as an eclectic mix of songs from various artists including Spoon.

The soundtrack includes the original recording of the song that Harold plays for Ana, "" by .

was nominated for a for his role as Harold Crick.

was nominated for in the category.

The film borrows heavily from "Niebla" by "", a Spanish novel about a character who becomes aware he is being narrated by a writer and goes to visit him.Fact|date=December 2007 Another possible influence is "", the first novel by the Scottish writer , in which the main character hears a voice narrating her life accompanied by the tapping of typewriter keys. , referenced by Hoffman's character in the film, may also be seen as an influence, particularly his post-modern works like "". , who has had discussions with , a character he created in his books, may also be an influence.

The film contains several references to 's painting "", the most obvious of which is when Harold is seen walking to work in a dark suit with a green apple in his mouth.

Geometrical and mathematical motifs occur frequently throughout the film. According to bonus features on the DVD release of the film, these represent Harold's "GUI": his thoughts as he takes in the world made visible, and were designed to reflect Harold's -like counting and measuring behaviors. The fact that he sees number lines and other mid-air visualizations hints that he may have a mild form of , a mental condition where senses melt together. It is a harmless condition that oftentimes becomes useful.

The last names of many characters can be connected to the last names of famous modern scientists and mathematicians: , , , , , , , and . Penny Escher's name can be connected to , a Dutch graphic artist whose work was heavily influenced by mathematics. The Kroenecker bus, which hits Harold, can be attributed to the famous mathematician of the same name, .Karen Eiffel's publisher, Banneker Press, can be attributed to mathematician and clockmaker .Other small mathematics and science references are slipped in, such as a mention of the corner of Street and Born Avenue.