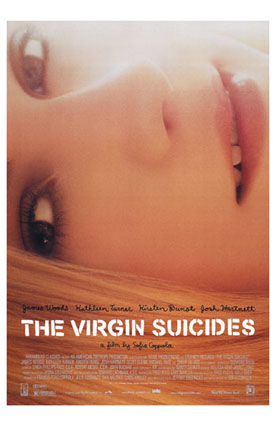 "The Virgin Suicides" is a 1999 American written and directed by , starring , , and . Based on the novel by , the film tells of the s of the five Lisbon sisters in an upper middle class of during the 1970s. The girls’ suicides fascinate their community as their neighbors struggle to find an explanation for the acts.

The story takes place in in the 1970s, as four neighbourhood boys reflect on their neighbours, the five Lisbon sisters. Beautiful but strictly unattainable due to their overprotective, isolating parents, Therese, Mary, Bonnie, Lux, and Cecilia Lisbon are the enigmas that fill the boys' dreams.

The film begins with the suicide attempt of the youngest sister, Cecilia, and the immediate aftermath. During a chaperoned party that summer - intended to make Cecilia feel better - Cecilia excuses herself mid-party and finally succeeds in taking her life by jumping out of her bedroom window and impaling herself on an iron fence. In the wake of her act, the Lisbon family isolate themselves even more within their community, heightening the sense of mystery about them.

The new school year starts that fall and Lux, the most promiscuous of the Lisbon sisters, forms a secret relationship with Trip Fontaine, the school heartthrob. Trip eventually persuades Mr. Lisbon to allow him to take Lux to the Homecoming dance (by promising to find dates for the other sisters and go as a group). After being crowned Homecoming King and Queen, Lux and Trip have sex on the football field that night. Trip abandons her immediately afterwards.

Having broken curfew, Lux and her sisters are punished by a furious Mrs. Lisbon by being taken out of school and sequestered within their house indefinitely. Unable to leave their home, the Lisbon sisters contact the boys using light signals, and share songs over the phone as a means of communicating their emotions back and forth.

During this time, Lux begins to have anonymous sexual encounters on the roof of the house late at night, while the boys watch from across the street. Finally, after months of confinement, the Lisbon girls signal for the boys to come over one night - presumably to help them escape from the house. When the boys arrive, they find Lux smoking a cigarette alone in the living room. She invites them inside to wait for her sisters, while she herself goes to wait in the car.

The boys wander into the basement and discover a body hanging from the ceiling; terrified, they rush back out of the house. In the process, they stumble across the bodies of the remaining Lisbon sisters, who had all killed themselves in an apparent suicide pact moments before: Therese took sleeping pills, Bonnie hung herself in the basement, Mary stuck her head in the gas oven, and Lux died of carbon monoxide poisoning by leaving the car engine running in the garage.

Devastated by the suicides of all their children, Mr. and Mrs. Lisbon quietly flee the neighbourhood, never to return. The Lisbon house is sold soon after, along with all their personal belongings, while their neighbours - unsure of how to act - go about their lives as if nothing important really happened. The boys, however, find themselves unable to forget about the Lisbon sisters. They spend the rest of their lives reviewing the Lisbon girls' deaths, and the sequence of events over and over ... only to realize that the mystery of the girls is never to be solved, and the Lisbons will haunt them forever.

* as Ronald Lisbon
* as Sara Lisbon
* as Lux Lisbon
* as Trip Fontaine (teenager)
* as Trip Fontaine (adult)
* A.J. Cook as Mary Lisbon
* as Cecilia Lisbon
* as Therese Lisbon ["The Virgin Suicides" is Hayman's only film credit. She is a long time friend of the director, , and was given a part in the movie for this reason. She can also be seen in ' promo for "This Here Giraffe" which was also directed by Coppola.]
* as Bonnie Lisbon
* as Father Moody
* as Dr. E. M. Horniker
* Anthony DeSimone as Chase Buell
* Lee Kagan as David Barker ["The Virgin Suicides" is Kagan's only film credit.]
* as Paul Baldino
* as Parkie Denton
* as Tim Weiner
* as Joe Hill Conley
* as the Narrator

The film's score featured two tracks by the French electronic band Air, including "Playground Love". The film soundtrack featured songs by 1970s-era performers and by (90's) Sloan. A separate soundtrack album was released, featuring music from Heart and .