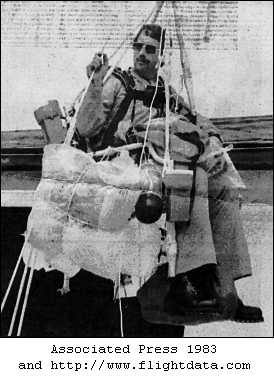 Lawrence Richard Walters, nicknamed "Lawnchair Larry" or the "Lawn Chair Pilot", (, – , ) was an American former truckdriver [ [http://www.darwinawards.com/stupid/stupid1998-11.html 1982 Honorable Mention: Lawn Chair Larry ] ] who took flight on , in a homemade aircraft. The device, dubbed "Inspiration I", was fashioned out of a patio chair and 45 -filled weather balloons. He rose to an altitude of 16,000 feet (3 miles or 4,900 meters) and floated from his point of origin in into controlled airspace near . The account of his flight was widely reported in newspapers.

Origin of his plan

The story goes that Walters had always dreamed of flying but was unable to become a pilot in the due to bad eyesight. He first came up with the idea of using weather balloons to fly at age 13, when seeing them hanging from the ceiling of an Army Navy surplus store. His original plan was to attach a couple of helium-filled weather balloons to his lawnchair, then cut the anchor and float above his backyard at a height of about convert|30|ft|m for a few hours, finally using a pellet gun to pop the balloons one after another to float gently to the ground again.

It was in the summer of 1982 that he finally realized his dream. Walters and his girlfriend, Carol Van Deusen, purchased 45 eight-foot s (from a military surplus store) and helium tanks at California Toy Time Balloons. To avoid suspicion, they used a forged requisition from his employer, FilmFair Studios, saying the balloons were for a television commercial shoot. Walters then attached the balloons to his lawn chair, filled them with helium, donned a , and strapped himself to the chair. He took with him a (with which he intended to shoot the balloons to lower himself), a , sandwiches, beverages (beer), and a camera. After that, things did not work out as he had planned. When his friends cut the cord that had tied his lawn chair to his Jeep, Walters' lawn chair, which was planned to rise convert|100|ft|m above the ground, rapidly rose at a rate of convert|1000|ft|m per minute, to a height of about convert|15000|ft|m; he did not dare shoot any balloons, fearing that he might unbalance the load. He drifted over Long Beach and crossed the primary approach corridor of .

He was in contact with REACT, a CB monitoring organization, who recorded their conversation::REACT: What information do you wish me to tell [the airport] at this time as to your location and your difficulty?:Larry: Ah, the difficulty is, ah, this was an unauthorized balloon launch, and, uh, I know I'm in a federal airspace, and, uh, I'm sure my ground crew has alerted the proper authority. But, uh, just call them and tell them I'm okay.

After spending about 45 minutes in the sky, he figured he would have to shoot a few balloons after all; doing so caused him to descend slowly again, until the balloons' dangling cables got caught in a power line, causing a blackout in a Long Beach neighborhood for 20 minutes, but also allowing Walters to climb down to the ground again.

He was immediately arrested by waiting members of the Long Beach Police Department; when asked by a reporter why he had done it, Walters replied, "A man can't just sit around."

Regional safety inspector Neal Savoy was reported to have said, "We know he broke some part of the Federal Aviation Act, and as soon as we decide which part it is, some type of charge will be filed. If he had a pilot's license, we'd suspend that. But he doesn't." Walters was initially fined US$ 4,000 for violations under U. S. , including operating an aircraft within an airport traffic area "without establishing and maintaining two-way communications with the control tower." Walters appealed, and the fine was reduced to US$1,500.

Walters also received the top prize from the for his adventure, as well as invitations to "The Tonight Show" and "" and an honorable mention in 1982's .

Larry's flight was replicated (though tethered) on one of the pilot episodes of the TV show "", in which one of the show's hosts was successfully lifted to a height just under 30 m (100 ft) and gradually reduced his altitude by shooting out balloons with a pellet gun.

The lawnchair used in his flight was given to an admiring boy named Jerry, although Walters later admitted he regretted doing so. The asked him to donate it to its museum. Twenty years later, the boy, by that time an adult, sent an e-mail to Mark Barry, a pilot who had documented Walters's story and dedicated a Web site to it, and identified himself as the boy who was given the chair. It had been sitting in his garage the whole time, still attached to some of the original tethers and water jugs used as ballast. [ [http://www.markbarry.com/lawnchairman.html www.markbarry.com ] ]

In retrospect, Walters said, "It was something I had to do. I had this dream for twenty years, and if I hadn't done it, I think I would have ended up in the funny farm. I didn't think that by fulfilling my goal in life &mdash; my dream &mdash; that I would create such a stir and make people laugh." After his flight, he was in brief demand as a and he quit his job as a driver. He was featured in a print ad in the early 90s, [ [http://www.check-six.com/Crash_Sites/Walters-BalloonRide.htm Check-Six.com - Scan of Walters' Timex ad] ] but he never was able to make much money from his fame. Later on in his life, Walters hiked the and did volunteer work for the .

He committed by shooting himself in the heart in on , . [cite news|publisher="People"|title=Crash Landing: A Daredevil's Despair Ends in his Suicide|date=13 December 1993|url= http://www.people.com/people/archive/article/0,,20106985,00.html]

* The flight and Walter's later inability to settle back into normal existence inspired "Up (The Man in the Flying Lawn Chair)", Bridget Carpenter's 2002 play that traced the discordant aftermath of fictional Walter Griffith's lawn chair adventure. [http://www.osfashland.org/_dwn/education/Study_Guide_Up.pdf]

* Larry Walters' flight is referenced in the third season of the Fox Comedy "Arrested Development", wherein , inspired by a television program about Walters, attempts to use a deck chair rigged with hydrogen balloons to escape from house arrest.
* Larry's flight was parodied in the "" episode .
* An episode of the 1980s television show "" featured a prison escape scene in which the character of Murdoch ties trash bags to a lawn chair and inflates them with hot air using hair dryers, allowing him to float up and out of the prison yard.
* An episode of "" ends with older brother Reese floating away from home on a balloon-lifted lawn chair. As he rises away, younger brother Dewey calls out, "I'll miss you, at first!"
* In an episode of "", Bill, Dale, and Boomhauer construct a flying lawnchair. The takeoff is botched, however, and Bill ends up in Mexico, hanging from a tree, and set upon by children who think he is a .
* An episode of "" included a lawn chair flight, aired , .
* In a episode of "" Larry Walters flight is shown as one of three, possibly true, legends. His is the true story.

* The story of Walters also inspired the romantic comedy "".

* Larry's flight is described in 's song "Hi-Lo and in Between" on his solo album "Sleeping on Roads"
* Larry's feat and later suicide inspired the song "Death of a Minor T.V. celebrity" from their 1998 album of the same name.
* Channel 3, a California hardcore punk band have a song about Larry Walters.
* A song by the band , describes the flight in the song "Walters" from their album "".
* The "Up" on their album "" is about Walters' flight.
* The 2000 Eggbo album, "Flight of an Urban Legend", contains a song entitled "Larry Walters" as well as cover art that suggests Walters' flight.

* Walters's flight inspired a satirical narrative thread in 's comic strip, where wheelchair-bound and ride across the ocean to cause havoc in -era .
* There is also an easter egg in "" that shows a man in a lawn chair attached to balloons, floating across the city, an obvious reference to Larry Walters.
* The "L-4 Society" card in the Illuminati card game by features an astronaut orbiting the Earth in a lawnchair suspended by helium balloons. This is both a spoof of Walters' legendary flight and of the .
* The final segment of the musical "" is called "" and is based on Larry's story.
* On , , wack packer Eric "the Midget" Lynch agreed to sit in a lawn chair while he was lifted up by balloons. Stern mentions the Tonight Show with Johnny Carson as inspiring the idea, although it may also be inspired by Larry's flight. On the next day, Lynch backed out due to new bits being played about him which he found insulting.
* Poet Marie Bader published a poem about Walters, titled "Ballooning". The poem also appeared in the October 2001 issue of "Mobius".

, a 47-year-old owner from , reportedly flew convert|193|mi|km in his lawn chair on Saturday, , , landing in a field about 3 1/2 miles NNW of North Powder, Oregon, about 30 miles from the border. Traveling an average of 22 mph, Couch used s filled with 75 litres (20 gallons) of as against the 105 large balloons tied to his lawn chair. Like Walters, Couch also had a BB gun on hand to shoot the balloons in order to initiate descent on his first attempt. During his 310-km (193 miles) flight he developed a way to release helium out of the balloons allowing for a more controlled descent. [ [http://www.ktvz.com/global/story.asp?s=6759982 "Bend lawn-chair balloonist soars high on 2nd flight"] ] On July 5, 2008, Couch finally realized his goal of interstate travel when he landed his lawnchair safely in western Idaho. The trip totaled 240 miles and took 9 hours and 12 minutes. [ [http://www.couchballoons.com Kent Couch Cluster Balloons ] ] [ [http://www.cnn.com/2008/US/07/05/lawnchair.balloons.ap/index.html?iref=mpstoryview Lawn-chair balloonist flies from Oregon to Idaho - CNN.com ] ]

In , the Brazilian Roman Catholic priest unsuccessfully flew using a chair and 1000 balloons. He did not check the weather forecast and got caught in a storm. He had a GPS but did not know how to operate it. He was last heard on the radio approaching the water after flying off the coast, unable to give his position, and crashed at sea: his body was found by the Brazilian navy near an offshore oil platform on July 4, 2008, one day before Couch's interstate lawnchair balloon flight.