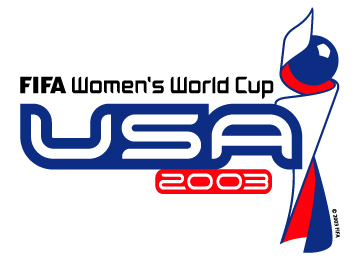 size = 250px
country = USA
caption = Official Logo
name =
teams = 99
num_teams = 16
champion_other = fbw|GER
second_other = fbw|SWE
third_other = fbw|USA
count = 1
matches = 32
goals = 107
attendance = 656789
top_scorer = flagicon|GER
7 Goals
The FIFA Women's World Cup 2003 was held in the and won by Germany. The tournament was originally scheduled for China. On May 3, 2003 the tournament was abruptly moved to the United States, as a result of the outbreak in China [ [http://www.ussoccer.com/history/host/fwwc03.jsp.html The Official Site of U.S. Soccer - 2003 FIFA Women's World Cup ] ] . Because the United States had hosted the 1999 World Cup, it was thought the United States could best organize the tournament in the little time remaining before the October scheduled start. In addition, women's soccer boosters in the United States hoped that interest generated by the tournament would save the U.S. women's professional league, the , from folding.

In compensation for losing the tournament, China retained its automatic qualification as host, and was named as host for the 2007 event. (China was eventually defeated by in the quarterfinals of the 2003 competition.)

16 teams participated in the final tournament. The teams were: