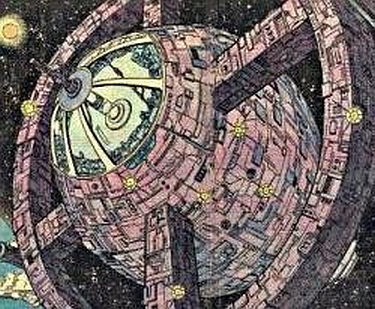 When the originally formed, its base of operations was the Secret Sanctuary, inside a cave in , Rhode Island. In "Justice League of America" # 77, honorary member betrays the location of the Secret Sanctuary to the Joker. The League subsequently moves its base to a new secure headquarters, an orbiting satellite 22,300 miles above the , in "Justice League of America" # 78 (February 1970).

The satellite would be the League's home for the next several years. Members are able to teleport to and from the satellite using teleportation centers located across the planet. League members took turns on watch duty, monitoring Earth from the satellite and dispatching the League as needed. This era of the Justice League (and its roster of heroes), is commonly referred to as the "Satellite League".

It is revealed in "Identity Crisis" that the satellite base was not quite as secure as the Justice League had hoped, as was able to use the satellite's transport system and break into the base. Finding alone aboard the satellite, he raped her.

The satellite is heavily damaged and rendered effectively inoperable just prior to Aquaman's decision to disband the team in "Justice League of America Annual" # 2. The League was in a time of transition, not only in its choice of headquarters, but also in its membership. The deepening detachment of members such as , , and caused the three charter Justice League members to resign from active duty with the League. At the same time, the Flash left the team to confront his manslaughter trial and investigate the disappearance of his wife. The death of her mother led Black Canary to leave the team and move to Seattle with Green Arrow. Green Lantern had been temporarily expelled from the and resigned from the League as well to sort out his life.

The satellite meets its final and complete destruction during the , when it is destroyed by a self-destructing Red Tornado that had been sabotaged and tampered with by the . It is never rebuilt, but the League would return to a spaceborne base of operations in the 1990s when it relocated to the Overmaster's orbiting base known as the Refuge.

Following the gathering of the new team as seen in "Justice League of America (vol.2)" # 7 (April 2007), a new satellite is presented as headquarters.

The new satellite is an orbiting Watchtower working together with "The Hall", a building located in Washington D.C. paid for by Batman and designed by Wonder Woman and John Stewart. Inside the Hall is an archway-type teleportation system, dubbed 'Slideways' in which a person merely need to walk through the archway to be transported to the League's new orbiting satellite headquarter 22,300 miles above Earth.

was called to design the new headquarters. Writer : "On the satellite, he did six different designs; some that resembled the old League satellite, [or] resembled the JLU satellite. We kind of took a little from Column A and B. I saw in one of his other designs, he also had these drones and I loved those, and I said, 'Can we put those on there as well? I really want to take that!'"

The satellite has a -like training room nicknamed "The Kitchen" because "if you can't stand the heat...". Meltzer also explains that, for the first time, the satellite has defensive and offensive weaponry. Despite the defense systems, the Watchtower was damaged by the .

Appearance in other media

The JLA Satellite appeared in the animated series, although it wasn't shown to be the headquarters of the Justice League. (At least not their regular headquarters, which was the Hall of Justice).

In the "Justice League" animated series, Justice League headquarters is an orbiting satellite. Although the headquarters is referred to as the , it's obvious that it was designed after the Justice League Satellite, considering that the Watchtower was not a satellite in the comics, it was a building on the moon. This animated version of the Watchtower appears in several episodes of "Justice League", as well as a two-part crossover episode of "". The heroes use the "Javelin-7" spacecraft to travel to earth and back, in place of the comic book's transporter. The Watchtower is destroyed in the series finale episode, "Starcrossed", when Earth is attacked by invaders from the planet .

In "", a new satellite Watchtower is introduced as a replacement for the original. The rebuilt satellite is substantially larger, in order to accommodate the many new members of the expanded League, as well as its many non-superhero personnel. There are now several Javelins, a teleportation system for beaming personnel down to earth, and a powerful energy weapon capable of causing massive damage on earth.

In the episode "Justice" of the television series "Smallville", Impulse, , Cyborg, , and Clark Kent work to destroy a facility owned by . provides directions and schematics from Oliver Queen's loft, and is given the codename "Watchtower."On the multimedia Smallville parallel story "Justice and Doom," John Jones (the ) used Swann Communications (a company owned by [http://smallville.wikia.com/wiki/Virgil_Swann Dr. Virgil Swann] , played by ) to build a large orbital satellite for use as a base.

Batman is introduced to the Justice League in a classic Hall of Justice version of the satellite, which floats above the earth on a massive asteroid. Although it is literally a "Justice League satellite," it hasn't yet been named as such.