A cycling power meter is a device on a bicycle that allows measuring of the power output of the rider. Most cycling power meters use strain gauges to measure torque applied, and, combined with angular velocity, calculate power. The Technology was adapted to cycling in the late 1980s and was tested in professional bicycle racing i.e.: the prototype Power Pacer (Team Strawberry) and by Greg LeMond with the SRM device. This type of power meter has been commercially available since 1989. Power meters using strain gauges are mounted in the bottom bracket, rear freehub, or crankset. Certain newer devices do not use strain gauges and instead measure power through handlebar-mounted units that utilize the principles of Newton's Second Law by measuring a cyclist's opposing forces (gravity, wind resistance, inertia, rolling resistance) and combining these with velocity to determine the rider's power output.

Training using a power meter is increasingly popular. Power meters generally come with a handlebar mounted computer that displays information about the power output generated by the rider such as instantaneous, max, and average power. Most of these computers also serve as all-around cycling computers and can measure and display heart rate as well as riding speed, distance and time. Power meters provide an objective measurement of real output that allows training progress to be tracked very simply—something that is more difficult when using, for example, a heart rate monitor alone. Cyclists will often train at different intensities depending on the adaptations they are seeking. A common practice is to use different intensity zones. When training with power, these zones are usually calculated from the power output corresponding to the so called lactate threshold or MAP (maximal aerobic power).

Power meters provide instant feedback to the rider about their performance and measure their actual output; heart rate monitors measure the physiological effect of effort and therefore ramp up more slowly. Thus, an athlete performing "interval" training while using a power meter can instantly see that they are producing 300 watts, for example, instead of waiting for their heart rate to climb to a certain point. In addition, power meters measure the force that moves the bike forward multiplied by the velocity, which is the desired goal. This has two significant advantages over heart rate monitors: 1) An athlete's heart rate may remain constant over the training period, yet their power output is declining, which they cannot detect with a heart rate monitor; 2) While an athlete who is not rested or not feeling entirely well may train at their normal heart rate, they are unlikely to be producing their normal power—a heart rate monitor will not reveal this, but a power meter will. Further, power meters enable riders to experiment with cadence and evaluate its effect relative to speed and heart rate.

Power meters further encourage cyclists to contemplate all aspects of the sport in terms of power because power output is an essential, quantitative link between physiological fitness and speed achievable under certain conditions. A cyclist's VO2_max (a proxy for fitness) can be closely related to power output using principles of biochemistry, while power output can serve as a parameter to power-speed models founded in Newton's laws of motion, thus accurately estimating speed.[1] The joint application of power meters and power models has led to increasingly more scientific analyses of riding environments and physical properties of the cyclist, in particular aerodynamic drag.[2]

Most cycling power meters use a set of wires to transmit power information to a computer mounted on the bicycle; this system has a serious disadvantage of having fine electrical cables being run all over the bicycle, making it harder to clean as well as using a fair number of fasteners to hold them up. However as of late 2008/early 2009, there is a general trend to move towards wireless systems . A popular wireless system is ANT+ by ANT. Currently, Garmin, Quarq, SRM (Schoberer_Rad_Meßtechnik) and PowerTap have deployed this interface for various purposes on the bicycle.

Crankset power meters measure the torque applied to both pedals via strain gauges positioned within the crank spider. A calculation of power is derived from the deflection of the strain gauges and pedaling cadence.

These units require specific cranksets, but can be relatively simple to interchange between bikes depending on compatibility.

Bottom bracket power meters rely on the torsional deflection in the BB shaft, this is done by the shaft having a disc at each end with perforations, these perforations are detected using non-contact photo-electric sensors that detect when torque is applied to the left pedal and then doubled. Data is sent digitally to a handlebar mounted computer unit.

These units are difficult to interchange and require a different bottom bracket unit for each bike. The only company producing such systems, Ergomo, went into liquidation in 2008. 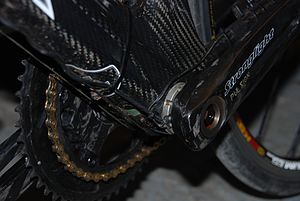 A freehub power meter uses the same strain gauges that are present in the crank power meters but are located in the rear wheel hub and measure the power after the drive chain, because of this, power should theoretically be measured less than the crank based power meters. Because these units are built into the rear wheel it is simple to interchange between bikes as long as the wheels are compatible.

At the heart of chain units is essentially a guitar pick-up that mounts to the cycle's chain stay. With this system the pick up detects the chain vibration and speed and mathematically converts it to a power output.

This method of power measurement relies on Newton's Second Law: applied minus opposing forces must equal mass times acceleration. Crankset, bottom bracket, freehub, and chain systems measure applied forces and, therefore, require placement of sensors near the bike pedal. Opposing force power meters measure hill slope (gravity), wind speed, bike acceleration (inertia), and frictional drag. Opposing force power meters place all key sensors in the computer head, resulting in lighter weight, extreme bike-to-bike portability, and lower cost. The downside to these types of meters is that they have to make assumptions about things such as aerodynamic efficiency. A rider in a tucked aerodynamic position using one of these power meters on a TT or Triathlon bicycle would most likely get a higher reading than a rider who is sitting in an upright, non-aerodynamic position if both riders were to apply the same amount of power to their pedals.

This method monitors the forces applied to the pedal by the cyclist's foot. Sensors in the shoe or pedal measure the forces as the cranks rotate, and calculate the power based on the magnitude and direction of the applied force, and the angular velocity of the crank. Advantages of this technique include independent measurement of power for each leg, measurement of efficiency of pedaling style, and (depending on placement of sensors) avoiding the need to replace bike components. No commercial system using this technique is available yet for use outside a laboratory although Garmin has announced plans to release a version called Vector in March 2012. At least one other company, Brim Brothers, is aiming for a 2012 launch of a direct force power meter.