Marble Blast Ultra (commonly abbreviated as MBU) is a 3D puzzle/action game involving a marble developed by GarageGames. It was released on January 25, 2006 for the Xbox 360 via Xbox Live Arcade. It is the sequel to Marble Blast Gold. It features 60 brand new levels, enhanced graphics, 2 new power-ups and a multiplayer mode. A PC port of the game under the title Marble Blast Online was playable exclusively at InstantAction until the website was shut down. As of year-end 2010, Marble Blast Ultra has sold over 756,000 copies. In February 2011 the game was delisted from XBLA. 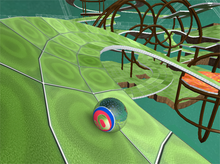 In Marble Blast Ultra players navigate a marble through obstacles and gaps to reach the finish in sixty levels.

In Single player mode, the player has the main goal of reaching the finish pad of the level as fast as possible. Obstacles will hinder the player's progress, but powerups are also provided to help the player finish the level. There are sixty single player levels that can be completed by the player. They are divided into Beginner, Intermediate, and Advanced Levels, each category containing twenty levels. Many of these levels (For example 'Survival of the Fittest', 'Natural Selection', and 'Ordeal') are recycled from Marble Blast Gold.

There is a par time set for each of the levels, and if the player beats the level under par time, the player will earn achievements based on how many levels they successfully completed under par time. Additionally, if the player has Xbox Live connection, his or her best time will show on a leaderboard where players worldwide can compare their best times. The leaderboard is updated whenever a player gets a new record time.

Multiplayer contains 10 levels and supports up to 8 simultaneous players. There is only 1 mode which consists of collecting gems within a certain time limit (three to six minutes), which depends on the level. After a group of 2-6 gems are collected entirely, another set of gems appear elsewhere on the board. Players race to these gems and use power-ups to navigate across the level quicker and interfere with other players.

There are three types of gems: red, yellow, and blue. Red gems are worth one point, while yellows are worth two and blues are worth five. Most likely, blue and yellow gems will be much harder to get than the red gems. The player at the end of the time limit with the most points wins. Players can change their marble's appearance by choosing from a variety of patterns and pictures in the main menu, such as a globe marble or a tiger marble as well as adding several different effects to use online. Ranked matches and player matches are supported along with an overall multiplayer leaderboard for ranked and player matches. Users can create a game or join one and filter parameters such as level, players, and gamer zone. Private games are also supported.

Marble Blast Ultra was originally released for 800 Microsoft Points. However, on December 5, 2007, it was made an Xbox Live Arcade Hit and its price was lowered to 400. In 2008, three new achievements totaling 50 gamerscore were added to Marble Blast Ultra on Xbox.com.[1] On Wednesday the 29th of October 2008 a new downloadable content pack was made available which contained a new multiplayer level "Marble It Up". On December 3, 2008 the Marble-Fu map pack was released, and on December 23, 2008 the Agoraphobia pack was released.[1] Each pack contained five maps and was available on InstantAction prior to their Xbox 360 release.