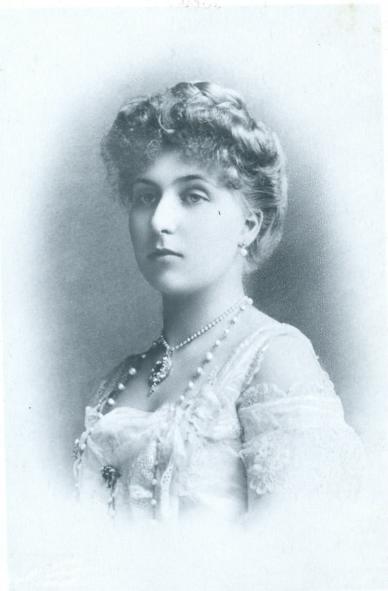 
Victoria Eugenie of Battenberg (Victoria Eugenie Julia Ena; - ), was of King Alfonso XIII of Spain. She was a granddaughter of Queen Victoria. The current , Juan Carlos, is her grandson.

Victoria Eugenie was born on at , . Her father was , the fourth child and second son of by his wife Countess . Her mother was Princess Beatrice, the fifth daughter and youngest child of Queen Victoria.

As her father was the product of a , Henry took his style of "Prince of Battenberg" from his mother, who had been created Princess of Battenberg in her own right. As such Henry's daughter would have been born "Her Serene Highness Princess Victoria Eugenie of Battenberg". She was named for her two grandmothers and for her godmother, Empress Eugénie, the Spanish-born widow of the former Emperor of the French Napoleon III, who lived in exile in . The last of her given names was chosen because of her birth in (her younger brother Maurice would receive "Donald" as the last of his given names for the same reason) and due to her lineage: Princess Beatrice had written 'Eua' on the birth document (a Gaelic name), but this was misread by Dr. Cameron Lees, who presided at her christening, as 'Ena'. To her family, and the British general public, she was ever afterwards known as "Ena".

Victoria Eugenie grew up in Queen Victoria's household, as the British monarch had reluctantly allowed Beatrice to marry on the condition that she remain her mother's full time companion and personal secretary. She therefore spent her childhood at , Balmoral, and on the . Her father died while on active military service after contracting fever in Africa in 1896. After the death of Queen Victoria in 1901, the Battenbergs moved to and took up residence in . During a summer in Osborne, Victoria Eugenie met , a cousin to . The Grand Duke felt attracted to the beautiful English princess and when they met again in in 1905, he proposed marriage to her. She was about to accept but declined at the last moment.

In 1905 King made an official visit to . Victoria Eugenie's uncle, King Edward VII, hosted a dinner in , in honour of the Spanish King. Alfonso sat down between Queen Alexandra and Princess Helena, King Edward's sister. Suddenly he noticed Victoria Eugenie and he asked Princess Helena who was that princess with almost white hair. When she noticed the King's eyes upon her, Victoria Eugenie felt abashed. Everybody knew that King Alfonso was looking for a suitable bride and one of the strongest candidates was , daughter of King Edward's brother, the . But now Victoria Eugenie had drawn the King's attention and, as Princess Patricia seemed not to be impressed by the Spanish monarch, Alfonso's interest in Victoria Eugenie grew. So the courtship began and when Alfonso returned to Spain he constantly sent postcards to Victoria Eugenie and was very enthusiastic about her. His widowed mother, , did not like her son's choice,in part because she considered the Battenbergs non-Royal, because of the obscure origin of Prince Henry's mother, and in part because she wanted her son to marry within her own family, the Habsburgs from Austria. Another reason against the marriage was the religion of the English Princess (Alfonso was Roman Catholic; the English Princess was Anglican). Another reason was , the disease that Victoria had transmitted to some of her descendents. Eugenie's brother Leopold was a haemophiliac, so there was a 50% probability that Victoria Eugenie would be a carrier, although the degree of risk was not yet known. Still, if Alfonso married her, their issue could be affected by the disease. However, Alfonso was not dissuaded.

After a year of rumours about which princess the King of Spain would marry, finally acceded to her son's selection in January 1906 and wrote a letter to Princess Beatrice, Victoria Eugenie's mother, telling her about the love Alfonso felt for her daughter and seeking unofficial contact with King Edward VII. Some days later in Windsor, King Edward congratulated his niece on her future engagement.

The terms of the marriage were settled by two agreements, a public treaty and a private contractual arrangement. The treaty was executed between Spain and the in London on 7 May 1906 by their respective plenipotentiaries, the Spanish Ambassador to the Don Luis Polo de Bernabé, and the British Foreign Secretary Sir , Bt. s were exchanged on 23 May following. Among other conditions, the treaty stipulated:

BE it known unto all men by these Present that whereas His Catholic Majesty Alfonso XIII, King of Spain, has judged it proper to announce his intention of contracting a marriage with Her Royal Highness Princess Victoria Eugénie Julia Ena, niece of His Majesty Edward VII, King of the United Kingdom of Great Britain and Ireland and of the British Dominions beyond the Seas, Emperor of India, and daughter of Her Royal Highness the Princess Beatrice Mary Victoria Feodore (Princess Henry of Battenberg)..."Article I." It is concluded and agreed that the marriage between His said Majesty King Alfonso XIII and Her said Royal Highness the Princess Victoria Eugénie Julia Ena shall be solemnized in person at Madrid as soon as the same may conveniently be done. "II." His said Majesty King Alfonso XIII engages to secure to Her said Royal Highness the Princess Victoria Eugénie Julia Ena from the date of her marriage with His Majesty, and for the whole period of the marriage, an annual grant of 450,000 "s". His said Majesty King Alfonso XIII also engages, if, by the will of Divine Providence, the said Princess Victoria Eugénie Julia Ena should become his widow, to secure to her, from the date of his death, an annual grant of 250,000 "pesetas", unless and until she contracts a second marriage, both these grants having already been voted by the "Cortes". The private settlements to be made on either side in regard to the said marriage will be agreed upon and expressed in a separate Contract, which shall, however, be deemed to form an integral part of the present Treaty..."III." The High Contracting Parties take note of the fact that Her Royal Highness the Princess Victoria Eugénie Julia Ena, according to the due tenor of the law of England, forfeits for ever all hereditary rights of succession to the Crown and Government of Great Britain... [cite web
url = http://www.geocities.com/dagtho/spain-mt-19060507.html| title = Hoelseth's Royal Corner| accessdate = 2006-11-11| work = Spanish royal family links
publisher = Dag Trygsland Hoelseth]

The treaty's reference to the forfeiture of Ena's British succession rights reflected neither the British government's of the alliance, nor to any made by her. Rather, it was an explicit recognition of the fact that by marrying a Roman Catholic, Ena lost any right to inherit the British crown as a consequence of Britain's Act of Settlement. This exclusion was personal and limited: those among her descendants who do not become Roman Catholic remain in the line of succession to the British throne.

The treaty did not constitute compliance with the Royal Marriages Act of 1772, which requires that descendants of King George II obtain the British sovereign's prior permission to marry by . While an exception to this requirement exists for descendants of royal daughters that marry "into foreign families", Ena's father had been naturalised a British subject prior to his wedding. Nevertheless, concern about reaction to the marriage among Protestants prompted the British government to avoid having the King consent to the marriage in his . This omission would have rendered the marriage void in Britain, but the Government took the position that Ena was not bound by the Royal Marriages Act, apparently relying upon the law's use of the flexible construction "foreign families", since Prince Henry's father had been German and his mother Polish.

Victoria Eugenie married King Alfonso at the Royal Monastery of San Geronimo in Madrid on . Present at the ceremony were her widowed mother as well as her cousins, the Prince and Princess of Wales (later King George V and Queen Mary),

After the wedding ceremony, the royal procession was heading back to the Royal Palace when an attempt was made on the King and his new consort (now called "Queen Victoria Eugenia" or, less formally, "Queen Ena"). Anarchist threw a bomb from a balcony at the royal carriage. Ena's life was saved because, at the exact moment the bomb exploded, she turned her head in order to see St. Mary's Church, which Alfonso was showing her. She escaped injury, although her dress was spotted with the blood of a guard who was riding beside the carriage.

After the inauspicious start to her tenure as Queen of Spain, Ena became isolated from the Spanish people and was unpopular in her new land. Her married life improved when she gave birth to a son and heir to the kingdom, Don Alfonso. However, while the baby prince was being circumcised, the doctors noted that he did not stop bleeding — the first sign that the infant heir had haemophilia. Ena was the obvious source of the condition, which was inherited by her eldest and youngest sons. Contrary to the response of , whose son and heir by another granddaughter of Queen Victoria was similarly afflicted, Alfonso is alleged never to have forgiven Ena nor to have come to terms with what had happened. In all, King Alfonso XIII and Queen Victoria Eugenia had seven children, five sons and two daughters. Neither of their daughters is known to have been a carrier of haemophilia.

After the birth of her children, Ena's relationship with Alfonso deteriorated. Alfonso was suspected of having numerous , including a dalliance with Ena's British-born cousin, the Infanta Beatrice d'Orléans-Borbón.

Ena devoted herself to work for hospitals and services for the poor, as well as to education. She was also involved in the reorganization of the Spanish .

The Spanish royal family went into exile on after municipal elections brought Republicans to power in most of the major cities, leading to the proclamation of the . Alfonso XIII had hoped that his voluntary exile might avert a civil war between the Republicans and the Nationalists. The royal family went to live in and later . Ena and Alfonso later separated, and she lived partly in England and partly in . In 1939, after started, Ena was asked to leave the , as she was no longer a member of the .Fact|date=February 2007 She purchased a , the , outside of .

In 1938, the whole family gathered in for the baptism of Don Juan's eldest son, . On , Alfonso XIII, feeling his death was near, transferred his rights to the Spanish crown to his son Don . On , Alfonso suffered a first heart attack. Alfonso died on .

Ena died in Lausanne on , aged 81, exactly 38 years after she had left Spain for exile. She was interred in the church of "Sacré Coeur" in . On , her remains were returned to Spain and reinterred in the Royal Vault in the , outside Madrid, next to the remains of her husband, Alfonso XIII, and her sons, Infante Don Alfonso, Infante Don Jaime, and Infante Don Gonzalo.

Ena's grandson is the present King of Spain. She was also the godmother of , the ing Prince of Monaco.