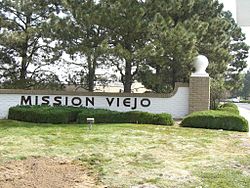 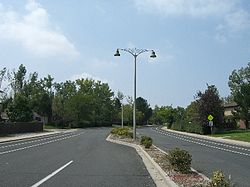 Mission Viejo is a subdivision of Aurora, Colorado, in the Denver-Aurora Metropolitan Area. It is bordered by Buckley Road to the east, Hampden Avenue to the north, Chambers Road to the west and Quincy Avenue to the south.

The land on which Mission Viejo lies was once a homestead at the corner of Quincy Avenue and Chambers Road. The 640-acre (2.6 km2) plot was purchased around 1972 by the Mission Viejo Company of California with the purpose of creating a planned development in the style of Mission Viejo, California with "Barcelona" entrance walls and "Mission Bell" street lights. Two parkways (Alicia and Marguerite) are also named in honor of Rancho Mission Viejo's matriarchs. The development opened in September of 1972.

The subdivision contains parks, homes of various style, and a Cherry Creek Schools elementary school. A branch of the Aurora Public Library was present in the neighborhood, until it was closed by the city of Aurora at the end of 2009. Notable features of the subdivision include the circular drive at its center formed by Mission Parkway, Alicia Parkway and Mission Viejo Park. Mission Viejo Park comprises a large part of the interior of the circle, providing walkways, picnic areas, ball fields, and a large space for family time and community events. Tollgate Creek also runs along the west edge of the park, next to a paved walkway where residents often walk their dogs.

Mission Viejo is made up of at least two covenant-controlled communities, Mission Viejo (houses) and Seville Townhomes (northern-area condos/townhomes).