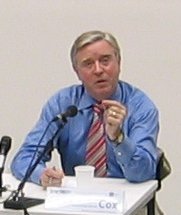 Pat Cox (born 28 November 1952) is a former Irish politician and television current affairs presenter. He was President of the from 2002 to 2004 and served as a member of the parliament from 1989–2004. He is now a consultant for European Integration Solutions. [http://www.www.eu-is.com]

Born in but raised in , Cox was educated at . He first came to prominence as a journalist, then a presenter, with 's "Today Tonight", a four nights a week current affairs programme which dominated the Irish television schedules in the 1980s. Cox left the programme to become a political candidate. He was elected an MEP in 1989 for the constituency of , representing the (PDs). In the 1992 general election he was also elected to as a (TD) for .

Following 's retirement from the party leadership in 1993, Cox stood for election to the post, but was beaten by . Cox became deputy leader.

Cox left the PDs in 1994 in a dispute over his seat as an MEP. It was expected that Cox would not contest his seat in the 1994 European Elections, with O'Malley, who had a large Munster base, becoming the party candidate. However Cox almost literally at the last minute chose to contest the seat as an independent, beating O'Malley, the PD candidate. On being elected, he resigned his Dáil seat and a by-election was held on 10 November 1994, which was won by .

On 20 May 2004 he was awarded the for his achievements with regard to the and for his work in promoting greater EU democratisation.

He is a member of the Comite d'Honneur of the . In 2006 he was elected President of , an international lobby association.