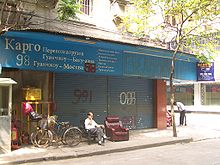 The storefront of one of many freight forwarders located around Guangzhou's garment districts. The list of destinations indicate that this business serves importers of Chinese clothes to countries such as Russia and Azerbaijan.

A freight forwarder, forwarder, or forwarding agent is a person or company that organizes shipments for individuals or other companies and may also act as a carrier.[1][2][3] A forwarder is often not active as a carrier and acts only as an agent, in other words as a third-party (non-asset-based) logistics provider that dispatches shipments via asset-based carriers and that books or otherwise arranges space for these shipments. Carrier types include ships, airplanes, trucks, and railroads.

The FIATA short-hand description of the freight forwarder as the 'Architect of Transport' illustrates clearly the commercial position of the forwarder relative to his client. In Europe there are forwarders that specialise in 'niche' areas such as railfreight and collection and deliveries around a large port. The latter are called Hafen (port) Spediteure (Port Forwarders). A forwarder in some countries may sometimes deal only with domestic traffic and never handle international traffic.

In Australia most licensed Customs Clearance Agents (now more commonly referred to as Customs Brokers), operate under a freight forwarder.

In order to start as a freight forwarder a person needs a government license.

The Canadian International Freight Forwarders Association [www.ciffa.com] was established in 1948 to support and protect the character, status, and interest of foreign freight forwarders by establishing uniform trade practice and regulations and eliminating trade evils and abuses. CIFFA also holds an educational role by providing a certificate and advanced certificate programs.

Even in smaller markets, such as Ireland, the role of freight forwarders is strategically important. International merchandise trade is worth €148 billion to the Irish economy[4]. 82% of manufactured products are exported, further highlighting the importance of the freight forwarders to a nations' economy. Associations like the Irish International Freight Association and FIATA help maintain the professionalism of this industry through educational and representative roles. The FIATA Diploma in Freight Forwarding is an example of how this can be achieved.

Freight-forwarding in Nigeria has been in place since the exporting of groundnut as a cash crop since 1914, though not initially as freight forwarding but as the means of transportation of both goods and services from one country to another. Following the methodology of their British forebears, agents were used to facilitate the transport of goods and services.

In the U.K., freight forwarders are not licensed, but many are members of the British International Freight Association (BIFA). Freight forwarders in the UK consolidate various goods from different consignors into one full load for road transport to Europe, which is often known as groupage. Some freight forwarders offer additional related services like export packing.

In the U.S., companies that handle domestic U.S. freight must be registred with the U.S. Department of Transportation's Federal Motor Carrier Safety Administratoin. Such forwarders are "carriers" who accept freight for transportation and are liable for transporting the freight from origin to destination, under their own bill of lading. The legal definition at 49 USC 13102 (8)is: FREIGHT FORWARDER.—the term ‘‘freight forwarder’’ means a person holding itself out to the general public (other than as a pipeline, rail, motor, or water carrier) to provide transportation of property for compensation and in the ordinary course of its business— (A) assembles and consolidates, or provides for assembling and consolidating, shipments and performs or provides for break-bulk and distribution operations of the shipments; B) assumes responsibility for the transportation from the place of receipt to the place of destination; and (C) uses for any part of the transportation a [surface carrier] carrier subject to jurisdiction [of the Department of Transportation] of under this subtitle.

International ocean freight forwarders arranging for shipments to and from the US must be licensed by the Federal Maritime Commission as Ocean Transportation Intermediaries.[5] An Ocean Transportation Intermediary is either an ocean freight forwarder or a non-vessel operating common carrier (NVOCC). An ocean freight forwarder is an individual or company in the United States that dispatches shipments from the United States via common carriers and books or otherwise arranges space for those shipments on behalf of shippers. Ocean freight forwarders also prepare and process the documentation and perform related activities pertaining to those shipments. An NVOCC is a common carrier that holds itself out to the public to provide ocean transportation, issues its own house bills of lading or equivalent document, but does not operate the vessels by which ocean transportation is provided. Companies may obtain both licenses and may act in both capacities even on the same shipment. The U.S. legal distinction between the two is that a freight forwarder acts as the agent of a principal (typically a shipper or consignee) and the NVOCC is a transportation company (carrier) that is physically responsible for the carriage of goods and acts as its own principal. Companies acting strictly as an Ocean Freight Forwarder typically do not issue their own contract of carriage (bill of lading) and as agent are generally not liable for physical loss or damage to cargo except in cases of errors in judgment or paperwork or fiduciary responsibility. NVOCC's act as ocean freight carrier and issue their own bill of lading and are legally responsible for physical loss or damage in accordance with the terms and conditions of their bill of lading and tariff. Similar to other countries, freight forwarders that handle international air freight will frequently be accredited with the International Air Transport Association (IATA) as a cargo agent however they must obtain an Indirect Air Carrier (IAC) certification from the Department of Homeland Security (DHS).

The original function of the forwarder was to arrange for the carriage of his customers' goods by contracting with various carriers. His responsibilities included advice on all documentation and customs requirements in the country of destination. His correspondent agent overseas looked after his customers' and kept him informed about matters that would affect movement of goods.

In modern times the forwarder still carries out those same responsibilities for his client. He still operates either as a domestic US carrier, or otherwise with a corresponding agent overseas or with his own company branch-office. In a single transaction, it can happen that the forwarder may be acting as a carrier (principal) or as an agent for his customer or both.[6]

International Freight Forwarders and NVOCCs and customs brokers often charge a fee for transferring documents to another transportation company at destination. This fee is a part of the ocean freight charges, being paid by the importer at the port of discharge in the incoterm FOB (Free On Board) and by the exporter at the origin in the incoterms CFR (Cost and Freight), CIF (Cost, Insurance and Freight) there are many other incoterms, those are the most common. This fee is separate from documentation fees charged by steamship carriers and NVOCCs as part of the freight charges on a bill of lading and is separate from other fees for document preparation or for release of cargo. Some companies may call this an admin fee, doc fee, doc transfer or other name but it exists in some form in most destinations around the world and is well known to most importers and exporters. Steamship carriers do not have this fee.

Typical day for a freight forwarder

A typical day for a freight forwarder would primarily consist of talking with clients and warehouse around the world. Taking this information and passing it along to the appropriate party whether that be an SSL (Steamship Line), United States Customs or the customer themselves. Along with making sure that the freight the client is importing or exporting gains entry into the country a freight forwarder must(most of the time) arrange for said freight to be picked up and delivered to the final consignee's place of business. This requires contacting trucking companies, rail lines and even sometimes exporting the goods to a different country for final delivery. A lot of this is now done over the Internet and phones. A typical freight forwarder will spend most of the day at a desk in front of a computer.