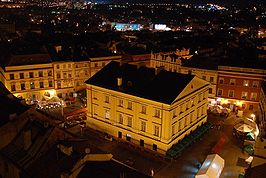 Building of the Crown Tribunal in Lublin

Crown Tribunal (Polish: Trybunał Koronny, Latin Iudicium Ordinarium Generale Tribunalis Regni) – was the highest appeal court in the Crown of the Polish Kingdom for most cases, exceptions being the cases were a noble landowner was threatened with loss of life and/or property - then he could appeal to the Sejm court (parliament court).

In 1578 king Stefan Batory created the Crown Tribunal in order to reduce the enormous pressure on the Royal Court. This placed much of the monarchs juridical power in the hands of the elected szlachta deputies, further strengthening the nobility class. In 1581 the Crown Tribunal was joined by a counterpart in Lithuania, the Lithuanian Tribunal (Trybunał Litewski).

Tribunal consisted of 27 secular deputies elected from nobility (szlachta) each year during the sessions of local parliaments (sejmiks) and 6 ecclesiastical deputies elected by capitulas. The tribunal was headed by a Tribunal President (prezydent in Crown, prezes in Lithuanian Tribunal) and a Marshal (marszałek trybunału). The Marshal was chosen from and by the judges themselves, while the President dealt with ecclesiastic matters (and was himself a high-ranking priest).

Two main locations of the Crown Tribunal were the towns of Piotrków Trybunalski (for lands of Greater Poland, held in autumn and winter) and Lublin (for lands of Lesser Poland, in spring and summer). Until 1590 some sessions were held in Łuck, and since 1764 in Poznań.

Decisions were supposed to be taken by consensus in the first or second voting, if there was no consensus, the third could was to be decided by a simple majority.

The Tribunals had many problems since their creation, as the judges rarely had any formal training and were basically politicians elected each year. With the progressing degradation of Polish political system, in the early 18th century the Tribunals became as corrupted and dependent on the magnates as the Polish parliament, Sejm. Several minor reforms had little effect until finally, the Tribunals were subject to a major reform by the Great Sejm of 1788-1792. However those reforms, along with the Tribunals themselves, were soon annulled in the aftermath of the partitions of Poland.

Wages for all judges were decided at Sejm meetings.

This article incorporates information from the revision as of 6 January 2006 of the equivalent article on the Polish Wikipedia.