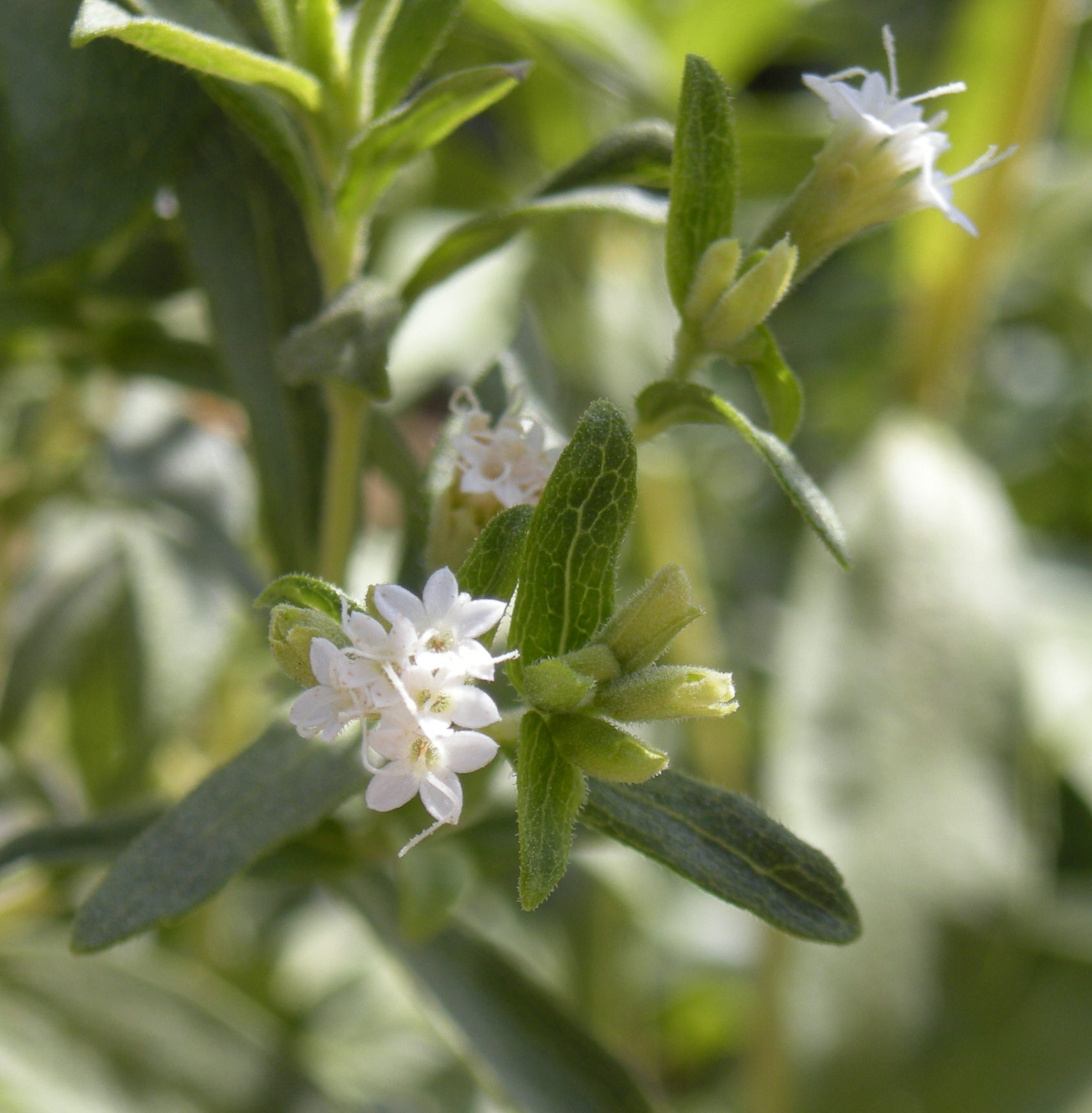 "Stevia" is a of about 240 of herbs and s in the sunflower family (), native to and and . The species "Stevia rebaudiana" Bertoni, commonly known as sweetleaf, sweet leaf, sugarleaf, or simply stevia, is widely grown for its sweet leaves. As a , stevia's taste has a slower onset and longer duration than that of , although some of its extracts may have a bitter or -like at high concentrations.

With its extracts having up to 300 times the sweetness of sugar, stevia has garnered attention with the rise in demand for low-carbohydrate, low-sugar food alternatives. Stevia also has shown promise in medical research for treating such conditions as [ [http://www.ncbi.nlm.nih.gov/entrez/query.fcgi?db=PubMed&cmd=Search&term=stevia%20obese PubMed research articles related to treatments of obesity] ] and . [ [http://www.ncbi.nlm.nih.gov/entrez/query.fcgi?db=PubMed&cmd=Search&term=stevia%20blood%20pressure PubMed research articles on stevia's effects on blood pressure] ] [ [http://www.ncbi.nlm.nih.gov/entrez/query.fcgi?db=PubMed&cmd=Search&term=stevia%20hypertension PubMed articles on stevia's use in treating hypertension] ] Stevia has a negligible effect on , even enhancing ; [cite journal |author=Curi R, Alvarez M, Bazotte RB, Botion LM, Godoy JL, Bracht A |title=Effect of Stevia rebaudiana on glucose tolerance in normal adult humans |journal=Braz. J. Med. Biol. Res. |volume=19 |issue=6 |pages=771–4 |year=1986 |pmid=3651629 |doi= |url=] therefore, it is attractive as a natural sweetener to diabetics and others on -controlled diets. [cite journal
author=Gregersen S, Jeppesen PB, Holst JJ, Hermansen K |title=Antihyperglycemic effects of stevioside in type 2 diabetic subjects |journal=Metab. Clin. Exp. |volume=53 |issue=1 |pages=73–6 |year=2004 |month=Jan |pmid=14681845 |doi= |url=http://linkinghub.elsevier.com/retrieve/pii/S0026049503003871] However, health and political controversies have limited stevia's availability in many countries; for example, the banned it in the early 1990s unless labeled as a supplement. Stevia is widely used as a sweetener in , and it is now available in the US and as a , although not as a . Rebiana is the for a stevia-derived sweetener being developed jointly by and with the intent of marketing in several countries and gaining regulatory approval in the US and EU. Truvia is Cargill's consumer brand of Rebiana-based sweetener.

The genus "Stevia" consists of 240

The exact structure of the aglycone and the glycoside were published in 1955.

Stevia species are found in the wild in habitats ranging from grassland to mountain terrain. Stevia does produce s, but only a small percentage of them . Planting cloned stevia is a more effective method of reproduction.

Stevia has been grown on an experimental basis in , since 1987 for the purpose of determining the feasibility of growing the crop commercially. In the United States, it is legal to import, grow, sell, and consume stevia products if contained within or labeled for use as a dietary supplement, but not as a food additive. Stevia has also been approved as a dietary supplement in ,

Rebiana is the trade name for a -pending, calorie-free, food and beverage sweetener derived from stevia and developed jointly by and . In May 2007, Coca-Cola announced plans to obtain approval for its use as a food additive within the United States by 2009. Coca-Cola has also announced plans to market rebiana-sweetened products in 12 countries that allow stevia's use as a food additive. The two companies are conducting their own studies in an effort to gain regulatory approval in the United States and the European Union. [cite news |title=Coke and Cargill teaming on new drink sweetener |author=Stanford, Duane D. |publisher=Atlanta Journal-Constitution |date=2007-05-31 |accessdate=2007-05-31 |url=http://www.ajc.com/business/content/business/coke/stories/2007/05/31/0531bizcoke.html] [cite news |title=Coke, Cargill Aim For a Shake-Up In Sweeteners |author=Etter, Lauren and McKay, Betsy |publisher=Wall Street Journal|date=2007-05-31 |accessdate=2007-06-01 |url=http://online.wsj.com/article/SB118058140982419717.html?mod=rss_whats_news_us] In May 2008, Cargill announced the availability of Truvia, a consumer brand of Rebiana.. [cite web | url=http://www.truvia.com | title=Truvia information | accessdate=2008-05-15]

The U.S. ingredient firm claims to have developed an economical industrial production process for isolating Rebaudioside A, a sweet compound derived from stevia, using a "more economical and proprietary process". The company expects to go into industrial scale production in 2008. The isolation process for Rebaudioside A results in a product that delivers the desired sweetness without a bitter aftertaste. [cite news |title=US firm claims cheap, industrial stevia production |author=Lorraine Heller |publisher=Food Navigator USA|date=2007-11-15 |accessdate=2007-11-01 |url=http://www.foodnavigator-usa.com/news/ng.asp?n=81404-blue-california-stevia-sweetener]

A 1985 study reported that steviol, a breakdown product from stevioside and rebaudioside (two of the sweet s in the stevia leaf), is a in the presence of a extract of pre-treated rats [cite journal
author=Pezzuto JM, Compadre CM, Swanson SM, Nanayakkara D, Kinghorn AD |title=Metabolically activated steviol, the aglycone of stevioside, is mutagenic |journal=Proc. Natl. Acad. Sci. U.S.A. |volume=82 |issue=8 |pages=2478–82 |year=1985 |month=April |pmid=3887402 |pmc=397582 |doi= |url=http://www.pnas.org/cgi/pmidlookup?view=long&pmid=3887402] — but this finding was criticized on procedural grounds that the data were mishandled in such a way that even would appear . [cite journal |author=Procinska E, Bridges BA, Hanson JR |title=Interpretation of results with the 8-azaguanine resistance system in Salmonella typhimurium: no evidence for direct acting mutagenesis by 15-oxosteviol, a possible metabolite of steviol |journal=Mutagenesis |volume=6 |issue=2 |pages=165–7 |year=1991 |month=Mar |pmid=2056919 |doi= |url=http://mutage.oxfordjournals.org/cgi/pmidlookup?view=long&pmid=2056919 – article text is reproduced [http://www.cookingwithstevia.com/interpretation.html here] .] Over the following years bioassay, cell culture, and animal studies have shown mixed results in terms of toxicology and adverse effects of stevia constituents, but in general, they have not been found to be harmful. While reports have emerged finding steviol and stevioside to be weak mutagens,

In 2006, the (WHO) performed a thorough evaluation of recent experimental studies of stevioside and steviols conducted on animals and humans, and concluded that "stevioside and rebaudioside A are not genotoxic "" or "" and that the genotoxicity of steviol and some of its oxidative derivatives "" is not expressed ""."

In 1991, at the request of an anonymous complaint, the (FDA) labeled stevia as an "unsafe food additive" and restricted its import. The FDA's stated reason was "toxicological information on stevia is inadequate to demonstrate its safety." [ (1995, rev 1996, 2005). [http://www.fda.gov/ora/fiars/ora_import_ia4506.html Import Alert #45-06] : "Automatic Detention of Stevia Leaves, Extract of Stevia Leaves, and Food Containing Stevia"] This ruling was controversial, as stevia proponents pointed out that this designation violated the FDA's own guidelines under which any natural substance used prior to 1958 with no reported adverse effects should be generally recognized as safe (GRAS).

Stevia occurs naturally, requiring no to produce it. As a consequence, since the import ban in 1991, marketers and consumers of stevia have shared a belief that the FDA acted in response to industry pressure. congressman , for example, called the FDA action against stevia "a to benefit the artificial sweetener industry." [Kyl, John (R-Arizona) (1993). Letter to former FDA Commissioner about the 1991 stevia import ban, quoted at [http://www.herbalremedies.com/stevquotandc.html herbalremedies.com] .] Citing privacy issues, the FDA has not revealed the source of the original complaint in its responses to requests filed under the .

The FDA requires proof of safety before recognizing a food additive as safe. A similar burden of proof is required for the FDA to ban a substance or label it "unsafe". Nevertheless, stevia remained banned until after the 1994 forced the FDA in 1995 to revise its stance to permit stevia to be used as a , although not as a food additive — a position that stevia proponents regard as contradictory because it simultaneously labels stevia as safe and unsafe, depending on how it is sold. [cite web
last = McCaleb
first = Rob
authorlink =
coauthors =
title = Controversial Products in the Natural Foods Market
work =
publisher = Herb Research Foundation
year= 1997
url = http://herbs.org/greenpapers/controv.html#stevia
format =
doi =
accessdate = 2006-11-08 ]

Although unresolved questions remain concerning whether metabolic processes can produce a mutagen from stevia in animals, let alone in humans, the early studies nevertheless prompted the to ban stevia's use in food in the pending further research. and have banned it also. However, more recent data compiled in the safety evaluation released by the World Health Organization in 2006 suggest that these policies may be obsolete.

Names in other countries

Both the sweetener and the stevia plant "Stevia rebaudiana" Bertoni (also known as " rebaudianum" Bertoni [cite web | url=http://www.ipni.org/ipni/idPlantNameSearch.do?id=100800-2&back_page=%2Fipni%2FeditSimplePlantNameSearch.do%3Ffind_wholeName%3DEupatorium%2Brebaudianum%26output_format%3Dnormal | title=Asteraceae "Eupatorium rebaudianum" Bertoni | work=] ) are known simply as "stevia" (pronEng|ˈstɛviə) in as well as in France, Germany, Italy, Portugal, Israel, Norway and Sweden — although some of these countries also use other terms as shown below. Similar pronunciations occur in Japan ("sutebia" or ステビア in ")", and in Thailand ("satiwia"). In some countries (India, for example) the name translates literally as "sweet leaf." Below are some names for the stevia plant in various regions of the world: [The [http://www.plantnames.unimelb.edu.au/Sorting/Stevia.html Multilingual Multiscript plant name database] has terms for the Stevia plant in various languages.]