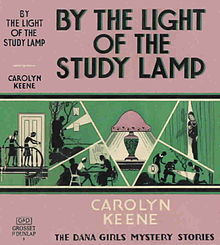 By the Light of the Study Lamp, the first Dana Girls book

The Dana Girls was a series of young adult mystery novels produced by the Stratemeyer Syndicate. The title heroines, Jean and Louise Dana, are teenage sisters and amateur detectives who solve mysteries while at boarding school. The series was created in 1934 in an attempt to capitalize on the popularity of both the Nancy Drew Mystery Stories and the Hardy Boys series, but was less successful than either. The series was written by a number of ghostwriters and, despite going out-of-print twice, lasted from 1934 to 1979; the books have also been translated into a number of other languages. While subject to less critical attention than either Nancy Drew or the Hardy Boys, a number of critics have written about the series, most arguing that the Dana Girls' relative lack of success was due to the more dated nature of the series.

The series' principal characters are Louise and Jean Dana, teenage orphans who solve mysteries while attending the fictional Starhurst School for Girls in Penfield, not far from their hometown of Oak Falls. When on vacation, the girls stay at the home of their guardians, their uncle, Captain Ned Dana, master of the S.S. Balaska, and his spinster sister, Aunt Harriet Dana. The household also includes a bungling maid, Cora Appel, often teasingly referred to as "Applecore" by Jean and Louise.

At school, the Dana girls are firmly under the control of the headmistress, Mrs. Crandall, who approves absences from class and other exceptions to the rules only when deemed absolutely necessary to the girls' detective work, however, as the series progresses and mysteries are solved to the benefit of the school, this becomes more and more frequent. Mrs. Crandall often volunteers herself or her husband to assist with investigations, either by driving them, chaperoning them, or at times, actively engaging in activity such as spying from horseback! Her husband, the bookish Professor Crandall, is usually occupied in his study and generally takes no interest in administrative affairs. It is rumored that the professor is engaged in writing a monumental English-language history of Ancient Greece and he is usually left alone by the student body, but the Dana girls discover he can be a useful source of obscure facts relating to the clues in a mystery. He generally takes a less active role in sleuthing than his wife, acting as a driver, escort, or researching a clue academically.

The Dana girls' principal recurring antagonists are the school bully, Lettie Briggs, the wealthiest girl at Starhurst, and her lackey Ina Mason. Lettie and Ina frequently attempt to solve the Dana girls' cases themselves while throwing their rivals off the scent; these attempts invariably fail and redound to Lettie and Ina's profound discredit. Lettie becomes angry in the first volume upon not receiving the room assignment of her choice in favor of the Danas, and serves as a rival (unsuccessfully) and prankster. Most of her pranks are to discredit the Danas, scholastically, athletically, morally, or detective skill: she alters or steals school assignments, plaigirizes their work, destroys academic research, puts acid on a towel before an athletic competition (to injure a hand), jeers/cheers against the Danas, short-laces shoes, hires a thug to disrupt an ice skating competition, and spreads rumors of untoward romantic leanings, their ethnic heritage, and other character slurs. Mrs. Crandall usually believes the reports until the Danas make an explanation.

The Dana Girls series was created by Harriet Adams, who sought to capitalize on the popularity of both the Nancy Drew and the Hardy Boys series.[1] The series was produced by the Stratemeyer Syndicate, a book packager specializing in children's series books, and heavily marketed as similar to the Nancy Drew series; the same pseudonym, Carolyn Keene, was used for both.

All books in the series were published by Grosset & Dunlap and written by a number of ghostwriters under the supervision of the Syndicate. The first four titles were written by Leslie McFarlane, who also wrote 19 of the first 25 volumes in the Hardy Boys series. McFarlane, however, disliked the job intensely,[2] only writing the fourth volume after requesting and receiving a higher fee than usual.[3] He declined to write any further titles, writing afterwards that "starvation seemed preferable."[4] McFarlane's antipathy towards the series stemmed largely from his discomfort from writing about two girls under a female pseudonym.[5] Adams assigned the series next to Mildred Benson, who was also writing the Nancy Drew series. Benson also did not particularly enjoy writing the series, stating at one point that "I never felt the same kinship with the Danas that I did with Nancy."[6] Benson nonetheless wrote volumes 5 through 16 before Adams began writing the series in 1955 with The Ghost in the Gallery. Adams wrote all subsequent volumes in the series, although at least one other title, The Strange Identities, was written by Grace Grote but never published.[7]

The series went out of print twice before going out of print for a final time in 1979. The Dana Girls Mystery Stories began publication in 1934 and were discontinued in 1944. The series went back in print in 1949, although new titles were not published until 1952. At that time, the books' jacket art was updated, from stylized, art deco designs to pictures of the Dana Girls finding a clue or chasing a suspect. In 1962, the books were changed to picture cover format, but with the same artwork.[8]

The books have also been translated into Swedish, Norwegian, Danish, German, and French. In Sweden, the Dana Girls are no longer Jean and Louise, but Mary and Lou. In France, they are known as Les Sœurs Parker ("The Parker Sisters"), Liz and Ann. In Germany, they are Barbie and Susan.

Unlike Nancy Drew, the Dana Girls have garnered little critical attention. Some find the series simply uninteresting and argue that the Dana Girls series was not as successful as Nancy Drew at least in part because early series authors Leslie McFarlane and Mildred Benson were uninterested in their creations.[2] Others have called the characters "pallid followers in the dazzling train of Nancy Drew"[9] and suggest that the series was less successful than the Nancy Drew Mystery Stories because of its melding of the mystery story with the boarding school story, a genre that was "fading in popularity" even in the 1930s.[10] The combination of genres has also been called unsuccessful because "the school's presence weakens the mysteries, as the mysteries detract from the school story."[11]

Bobbie Ann Mason criticizes the series, The Secret of the Swiss Chalet in particular, for "[realizing] the authorized, glamourized dreams of our culture"[12] by having the Dana Girls live privileged lifestyles. Carolyn Carpan, in contrast, argues that series such as the Dana Girls that were begun around the time of the Great Depression portrayed heroines as unrealistically wealthy in order to fulfill readers' fantasies.[13] Carpan also argues that the Dana Girls' detective work was an outgrowth of the Depression in another way; many jobs and activities previously reserved for men were increasingly taken by women in 1930s due to economic necessity.[14]