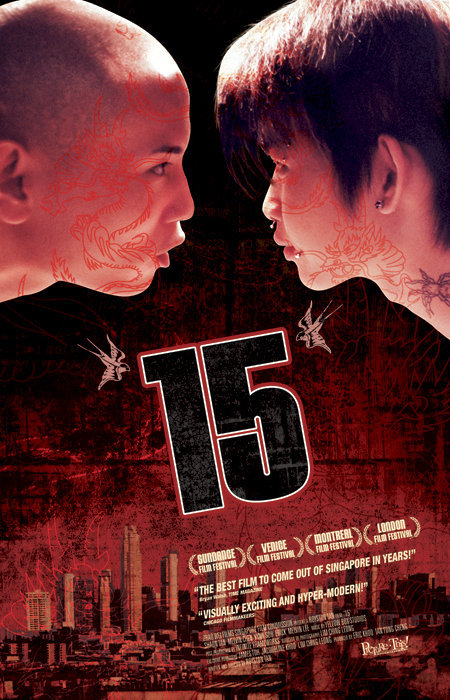 "15: The Movie", also known simply as "15", is a an about teenage gangsters in the Singapore suburbs. Directed by acclaimed filmmaker , the film is an expanded version of Tan's 2002 award-winning short film, also titled "15".

The film stars three real-life juvenile , aged 15, giving an honest and accurate depiction of Chinese teenage gang-life in the suburbs. The 2003 film features two more gangsters as characters as well as a fight sequence with more affluent English-educated Singapore youths. Rather than scripting the movie or employing professional actors, Tan attempted to capture the troubled lives of his characters in fashion.

In Singapore, the film premiered during the 2003 .

While "15: The Movie" was initially banned in Singapore, the Singapore Board of Film Censors (BFC) later ruled that the film should be rated R(A). [imdb title|id=0344766|title=15.] Under pressure from the BFC, Royston Tan ended up making 27 cuts to the film.

*"15: The Movie" has been advertised outside of Singapore in publications, due to the heavy homoerotic tension between the characters. However, in an interview segment of the DVD "", a collection of Tan's short films, Tan affirms that the boys whose lives he portrayed do not identify as gay.