"I AM" Activity
For the Biblical name of God often translated as I AM (biblical term), see Ehyeh-Asher-Eyheh and I Am that I Am.

The "I AM" Activity is the original Ascended Master Teachings religious movement founded in the early 1930s by Guy Ballard (1878–1939) and his wife Edna (1886–1971) in Chicago, Illinois.[1] It is an offshoot of theosophy and a major predecessor of several New Age religions including the Church Universal and Triumphant.[2] The movement had up to a million followers in 1938 [3] and is still active today on a smaller scale. According to the official website of the parent organization, the Saint Germain Foundation, its worldwide headquarters is located in Schaumburg, Illinois and there are approximately 300 local groups worldwide under several variations of the names "I AM" Sanctuary, "I AM" Temple, and other similar titles.[4] As of 2007, the organization states that its purpose is "spiritual, educational and practical," and that no admission fee is charged for their activities.[5] The term "I AM" is a reference to the ancient Sanskrit mantra "So Ham", meaning I Am that I Am.[6]

The movement believes in the existence of a group called the Ascended Masters, a hierarchy of supernatural beings that includes the original Theosophical Masters such as the Master Jesus, Morya, Maitreya, and in addition several dozen more beyond the original 20 Masters of the Ancient Wisdom of the original Theosophists. These "Ascended Masters" are believed to be humans who have lived in physical bodies, became immortal and left the cycles of "re-embodiment" and karma, and attained their "Ascension". The Ascended Masters are believed to communicate to humanity through certain humans, including Guy and Edna Ballard.[1][2] Because Jesus is believed to be one of the Ascended Masters, making the "Christ Light" available to seekers who wish to move out of darkness, many of the members of the "I AM" Activity consider it to be a Christian religion.[6] According to the Los Angeles Magazine, Ballard said he was the reembodiment of George Washington, an Egyptian priest, and a noted French musician.[7]

Ballard died in 1939. In 1942 his wife and son were convicted of fraud[4][7], a conviction which was overturned in a landmark Supreme Court decision, ruling that the question of whether the Ballards believed their religious claims should not have been submitted to a jury.[4] 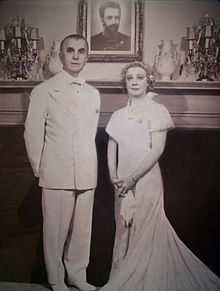 The "I AM" Activity was founded by Guy Ballard (pseudonym Godfre Ray King) in the early 1930s. Ballard was well-read in theosophy and its offshoots, and while hiking on Mount Shasta looking for a supposed Esoteric Brotherhood, he said that he had encountered a man who introduced himself as Comte de Saint-Germain, a historical 18th century alchemist and a regular component of theosophical religions.[3] The Ballards said they began talking to the Ascended Masters regularly. They founded a publishing house, Saint Germain Press, to publish their books and began training people to spread their messages across the United States. These training sessions and "Conclaves" were held throughout the United States and were open to the general public and free of charge.[8] A front page story in a 1938 edition of the Chicago Herald and Examiner noted that the Ballards "do not take up collections or ask for funds".[9] Some of the original members of I AM were recruited from the ranks of William Dudley Pelley’s organization the Silver Shirts. [10]Meetings became limited to members only after hecklers began disrupting their open meetings.[2][3] Over their lifetimes, the Ballards recorded nearly 4,000 messages which they said were from the Ascended Masters.[1] Guy Ballard, his wife Edna, and later his son Donald became the sole "Accredited Messengers" of the Ascended Masters.[3]

The Ballards' popularity spread, including up to a million followers in 1938.[3] They accepted donations (called "love gifts") from their followers across the country, though no such donation or dues were required.[9] Still, these donations allegedly left some followers deeply in debt, according to the Los Angeles Times.[11] The Ballards became quite wealthy.[3]

The first of many "Conclaves" held in scores of cities in their national tours was Philadelphia, Pennsylvania, October 10–19, 1934.[1] According to Los Angeles Magazine article, in August 1935, the Ballards hosted a gathering at the Shrine Auditorium in Los Angeles that drew a crowd of 6,000.[7] Guy Ballard spoke under the pseudonym he used in authoring his books, Godfre Ray King, and his wife used the pseudonym Lotus. The meeting included teachings they described as being received directly from the Ascended Masters. They led the audience in prayers and affirmations that they called decrees, including adorations to God and invocations for abundance of every good thing, including love, money, peace, and happiness.[1]

At the height of his popularity, Guy Ballard died from arteriosclerosis at 5:00 A.M. on December 29, 1939 at 2545 Belmont Avenue in Los Angeles, in the home of his son Donald. On December 31 his body was cremated. On New Year's Day during the annual Christmas Class, Edna Ballard stated that Guy had completed his Ascension at midnight December 31, 1939 from the "Royal Teton Retreat".[1]

Students of the "I Am" Activity believe in death as a change, not an ending. The "I Am" movement believe Ascension can mean Entering heaven alive, that is, to "raise one's body" -- physically translating to a higher form of existence, as in the Ascension of Jesus. This is what Guy Ballard had claimed his followers would be able to do if they followed his instructions such as refraining from having sex. [12]Students using this more traditional definition would have to conclude that Mrs. Ballard lied or was mistaken, since Mr. Ballard had died a quite ordinary death and his body had been cremated. There had also been questions raised about devout members who had died without entering heaven alive. At this time, Edna Ballard redefined "Ascension" as dying an ordinary death, but going to a higher level of heaven than a normal person because one has balanced "51% of one's karma". [13] This modified and more practical definition of "ascension" is used by all Ascended Master Teachings religions today, although they still believe that a select few, the higher level Ascended Masters such as Jesus and St. Germain, entered heaven alive.

Ballard died in 1939, as noted above. In 1942 his wife and son were convicted of fraud.[4][4][7] The Ninth Circuit overturned the conviction and the government appealed to the Supreme Court. In United States v. Ballard, the Supreme Court in a 5-4 landmark decision, ruling that the question of whether the Ballards believed their religious claims should not have been submitted to the jury, and remanded the case back to the Ninth Circuit, which affirmed the fraud conviction. Interpreting this decision, the Ninth Circuit later found that the Court did not go so far as to hold that "the validity or veracity of a religious doctrine cannot be inquired into by a Federal Court." [14]

On a second appeal, Supreme Court vacated the fraud conviction, on the grounds that women were improperly excluded from the jury panel.[15]

In March 1942, Edna Ballard moved the western branch of the Saint Germain Press and her residence to Santa Fe, where she recorded thousands more messages she said were from the Ascended Masters.[1]

Following the court cases, it was not until 1954 that the organization's right to use the mail was restored. The IRS revoked their tax-exempt status in 1941, stating it did not recognize the movement as "a religion". A court ruling in 1957 overturned the ruling of the IRS and re-established the group's tax-exempt status.[2][16]

As of 2007, Saint Germain Foundation maintains a reading room in Mount Shasta, California, and its headquarters in Schaumburg, Illinois. Several annual conclaves are held at their 12 story "I AM Temple" at 176 West Washington Street in downtown Chicago. Among the hundreds attending, there are usually dozens of "I AM" students from other nations.[1] Classes and conclaves are regularly held in approximately 300 locations in America, Europe, Latin America, Australia, and Africa.[17] Choirs and orchestras at the summer conclaves at Shasta Springs. The Saint Germain Press, a subsidiary of the Saint Germain Foundation, publishes the historical books and related artwork and audio recordings of the Ballards' teachings, and a monthly magazine available by subscription, titled "The Voice of the 'I AM'".[18] It has been estimated that the Saint Germain Press has printed and put into circulation over one million books.[1]

The Saint Germain Foundation presents the "I AM" COME! Pageant every August at Mount Shasta, and has done so each year since 1950. Their website states that the performance is open to the public at no cost, and describes the Pageant as a portrayal of "the life of Beloved Jesus, focusing on His Miracles of Truth and Healing, and the example of the Ascension which He left to the world." [19]

According to the group's teachings, Ascended Masters are believed to be individuals who have left the cycle of reembodiment. The "I AM" Activity calls itself Christian, because Jesus is considered to be one of the more important Ascended Masters. It also refers to itself as "patriotic" because Ascended Master St. Germain is believed to have inspired and guided the Declaration of Independence and the Constitution. Followers claim that St. Germain belonged to the same Masonic Lodge as George Washington and Benjamin Franklin. However, Guy Ballard tended to downplay any relation of his ideas to Freemasonry because of his great dislike, even hatred, of Franklin Delano Roosevelt, a famous Freemason. Thus the notion that the Count de Ste. Germain belonged to a Masonic Lodge was more part of general occult lore than part of Ballard's emphasis. [20],

The movement teaches that the omnipotent, omniscient and omnipresent creator God ('I AM' – Exodus 3:14) is in all of us as a spark from the Divine Flame, and that we can experience this presence, love, power and light – the power of the Violet Consuming Flame of Divine Love – through quiet contemplation and by repeating 'affirmations' and 'decrees'. By 'affirming' something one desires, one can cause it to happen.[3]

The group teaches that the "Mighty I AM Presence," is the way in which God exists as each person's Higher Self, and that a light known as the "Violet Flame" can be generated by the "I AM Presence" to surround each person who calls forth this action or expresses mercy or forgiveness. The group believes that by tapping into these internalized powers in accordance with the teachings of the Ascended Masters, one can use the "Presence" to eliminate evil from the world in favor of justice, and also to minimize personal difficulties in one's life.

The spiritual goal of the teachings is that, through a process of self-purification, rather than ordinary death the believer would become an Ascended Master when leaving their body. The process of attaining these results includes meditation, affirmations, and "decrees", to create alignment with the "I AM Presence" and invoke the Violet Flame, resulting in the desired positive changes.[6]

The group also emphasizes personal freedom, embracing patriotic symbols, and often displays American flags in its Temples or other offices.[6]

These "positive thinking" beliefs overlap with several other New Age movements such as Religious Science and the Human Potential Movement.[3]