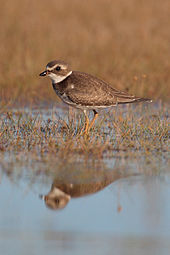 The Semipalmated Plover (Charadrius semipalmatus) is a small plover.

Their breeding habitat is open ground on beaches or flats across northern Canada and Alaska. They nest on the ground in an open area with little or no plant growth.

They are migratory and winter in coastal areas ranging from the United States to Patagonia. They are extremely rare vagrants to western Europe, although their true status may be obscured by the difficulty in identifying them from the very similar Ringed Plover of Eurasia, of which it was formerly considered a subspecies.

These birds forage for food on beaches, tidal flats and fields, usually by sight. They eat insects, crustaceans and worms. 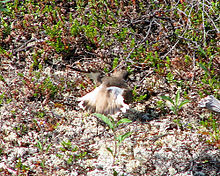 This bird resembles the Killdeer but is much smaller and has only one band.[2] The term "semipalmated" refers to its partly webbed feet. Like the Killdeer and since its nest is on the ground, it uses a "broken-wing" display to lure intruders away from the nest.