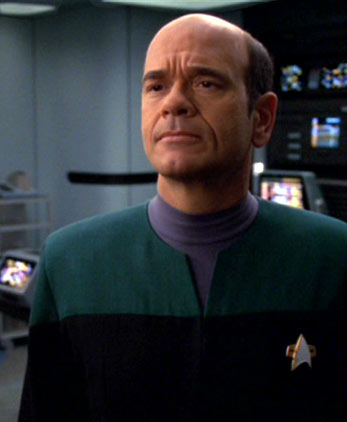 Caption = The Doctor of USS "Voyager"/"Joe",
Size = 240px
Species = /
Gender = (-wise)
Planet =
Posting = USS "Voyager"
Affiliation =
Portrayed = The Emergency Medical Hologram, better known as The Doctor, is a fictional character on the television series "". It is a computer program designed to give assistance to regular biological doctors. It is programmed with all current medical knowledge, including mannerisms from past Federation doctors. The Doctor was played by .

The character of The Doctor started his service on the USS "Voyager" as the standard built into almost every newer ship's , as an measure for use if the ship's doctor should ever be temporarily unable to perform his/her duties. In the series' first episode, "Voyager"'s Chief Medical Officer, along with his Vulcan nurse, were killed. The EMH was then called into duty. Given that the EMH was originally intended primarily as a temporary medical backup system, and not as an form as such, the Doctor essentially had to develop his own personality from scratch. This placed considerable strains on his program during the early parts of the journey.

Eventually, in order to try to develop a realistic personality, the Doctor not only manufactured a holographic family for himself (the episode "Real Life"), but also had an increasing number of other 'human' experiences. Because of these, the Doctor's program evolved to become more lifelike, with emotions and ambitions, and he developed meaningful and complex relationships with many members of the ship's crew. The Doctor also developed talents as a , artist, photographer, and even became a of the .

A recurring theme in the series was the set of ethical questions surrounding an artificial, but apparently sentient being. One interesting moment in this development was when the Doctor suffered an emotional breakdown: when faced with two patients that each had an equal chance of survival - but with only enough time to treat one patient - the Doctor chose to treat Harry Kim. The other patient, Ensign Jetal, died on the operating table. The Doctor was overwhelmed with guilt at this, since he happened to choose Harry - a person he happened to be friends with - and thus the Doctor believed his friendship with Kim inordinately influenced his choice of treatment. When the stress nearly led to his program breaking down, Captain Janeway had his memories of the experience deleted. However, when the Doctor later discovered clues as to what had happened, Captain Janeway was eventually convinced that the Doctor had a right to learn to cope on his own rather than be treated merely as a defective piece of equipment ("Latent Image").

However, Starfleet did not always accept the Doctor as a sentient being with all the rights afforded to a living person. This sparked particular interest when he sent a holonovel titled "Photons Be Free" to a publisher on Earth, detailing the manner in which holograms were sometimes treated by Starfleet. Originally, his characters were closely based on actual members of "Voyager"'s crew, but twisted to appear more vicious than they really were, leading to fears among the crew that people may assume they were really like that. managed to convince the Doctor to make adjustments without sacrificing his theme, but the Doctor was then forbidden to make any subsequent changes, as he lacked legal rights. Although the captain's subsequent efforts didn't result in the Doctor being ruled a 'person', he was accorded the status of 'artist', and was able to rewrite the novel. Four months later, it was known throughout the as a very thought-provoking piece of work.

In the earlier episodes, the Doctor always said "Please state the nature of the medical emergency" when he was activated, because it was the standard greeting of his program. He was later modified to say whatever he chose when activated. (He was later given the ability to deactivate himself in "Jetrel".)

The Doctor later acquired a mobile emitter ("Future's End") from the 29th Century, which allowed him to move about freely; previously, he had been confined to or the . He first revealed this to the crew when he single-handedly rescued and Torres from some freedom fighters in . The mobile emitter also made him ideal for missions where lack of or a toxic environment would have proven fatal to the rest of the crew. For example, in "", he joins a rescue mission to a planet in nuclear winter and disguises himself in one of the natives' radiation suits (it offers very limited protection, but as a hologram, he is completely unaffected by the atmosphere); he tosses a to , then stuns all of the natives holding weapons, allowing the crew to beam out to "Voyager" and escape.

In the episode "Blink of an Eye", "Voyager" becomes trapped in the orbit of a planet where linear time passes at a highly-accelerated speed. The Doctor beams down to the planet, where he gets lost, then lives for three "years", having a relationship with a woman, and having a son whom he names 'Jason Tabreez'.

The Doctor's programming soon evolved to the point where he fell in love with , though she did not reciprocate those feelings. Also, in an alternate future shown in the episode, "Endgame", the Doctor adopts the name 'Joe', then eventually marries a human female, named Lana (played by ).

His character's growth and gradual humanization throughout "Star Trek: Voyager" provided one of the more compelling arcs in the series. The Doctor often filled the role of the token "outside observer", a role filled on other "Star Trek" programs by such characters as Mr. Spock, Data, Odo and .Or|date=April 2008

The "Emergency Command Hologram" is first coined by the Doctor in the episode, "", where he creates a program that allows him to . In his grandiose daydreams, the Doctor adds routines which allow him to take command of "Voyager" in the event that the command crew were disabled. The daydreams are picked up by a Hierarchy vessel in a nearby and are thought to be real events. Once the crew discover that the Doctor is daydreaming, they become aware of some of his wishes by viewing his daydreams in the holodeck, including his desire to be an Emergency Command Hologram. Captain Janeway promises the Doctor that she will consider his proposal.

The ECH made its debut the following season in "Workforce". The crew is forced to abandon ship after an incident with a subspace mine, which releases a great amount of radiation. The only way to keep the ship moving is for the Doctor to take over the command functions.

In the episode "Renaissance Man", the Doctor uses his ECH persona in order to eject the , against the wishes of the rest of the crew.

Unlike most computer programs, the Doctor's program was never copied or backed up. "Voyager" has a limited memory capacity; the Doctor's entire program uses 50 million gigaquads ("Lifesigns"). This limitation was also mentioned in "" However, "Living Witness" depicts a future in which a backup copy does exist.

One recurring theme in the Doctor's life was his lack of a name. Starfleet did not give him one, and for a long time, the Doctor maintained that he did not want to have one. Later, over the years, he adopted such names as 'Schmullus', 'Smallus' (by a patient), 'Schweitzer' (after ), 'Van Gogh', 'Kenneth', 'Jones', and several others. The captioned dialog of early episodes, and early promotional material for the series' premiere, referred to him as 'Dr. Zimmerman', after his creator, . In the series finale, one future is shown where he has chosen the name "Joe." The events of that episode involve changing history, however; thus this name cannot be considered canonical.

Episodes in which the Doctor's character is expanded or plays a key role.
* "Caretaker" - Introduction to his character; first long-term activation
* "" - The doctor's first 'away mission' to the holodeck, to rescue crew members trapped in a renegade program.
* "Future's End" - Acquires his mobile emitter
* "Lifesigns"-Falls in love for the first time with Vidiian woman.
* " - Attempts to graft personalities of historical figures into his program
* "Real Life" - Creates a family on the holodeck
* "Message in a Bottle" - Transmitted to the Alpha Quadrant, to deliver a message
* "" - An alternate future wherein a back-up version of the Doctor is activated 700 years in the future and must defend against claims that "Voyager" was a warship
* "Latent Image" - Experiences psychologial trauma as a result of a patient's death
* ""- Experiences romantic feelings towards Seven of Nine.
* "" - The Doctor experiences being in command of "Voyager" against several attacking ships
* "" - The Doctor experiences fleeting fame.
* "" - Stolen from "Voyager" to serve in an alien hospital
* "" - Forced to incorporate his program into Seven of Nine allowing him sensory experiences
* "Author, Author" - Fights for his rights as a sentient lifeform
* "" - The Doctor uses his unique abilities as a hologram to best the crew.
* "Endgame" - Returns home to the Alpha Quadrant.

Robert Picardo also had a cameo in the movie "", where he played the emergency medical hologram of the USS "Enterprise"-E. Doctor activated him as a means of distracting the Borg, while they escaped. He replied, "I'm a doctor, not a doorstop", an homage to Doctor McCoy's famous line "I'm a doctor, not a..." (the Doctor also made this reference several other times, on "Voyager"). When the Borg break in, he attempts to offer them cream for itchy skin caused by their implants.

During his audition for the role of the Doctor, Robert Picardo was asked to merely say, "Somebody forgot to turn off my program." However, he then added the line, "I'm a doctor, not a light bulb" (Picardo was initially afraid that he may have ruined his chances -- ad-libbing, he explained, was something that one just 'did not do' in an audition). He then got the part.