Clapham Rovers was from its foundation in 1869 a leading English sports organisation in the two dominant codes of football, association football and rugby union.[1] It was a prominent club in the late 19th century but is now defunct. The club played variously on Clapham Common, Tooting Bec Common and Wandsworth Common and wore a cerise and French-grey kit.

The club was formed on 10 August 1869 by a meeting arranged by W. E. Rawlinson, who, on the formation of the club, was elected honorary secretary. At this very first meeting it was agreed to play under both codes, with Association rules to be played one week, and Rugby the other. This peculiar feature in the constitution of the club obtained for the club the sobriquet of the "Hybrid Club".[1] The first match was played on 25 September 1869, against the Wanderers, at that time arguably the strongest Association club. Despite the prowess of their opponents The Rovers won by one goal to nil. The Rovers were equally successful under Rugby rules, and such was their gathering reputation by January 1870, they had sufficient membership to enable the club to play two matches every Saturday, one under each code. At the close of the 1870 season only two matches had been lost, one under each rules, and in both instances the return match was won, (under Rugby rules, with the Marlborough Nomads; under Association, with Charterhouse School).[1]

Clapham Rovers were one of the fifteen teams to play in the very first edition of the FA Cup, in 1871-72. The first ever FA Cup goal was scored by Clapham Rovers' Jarvis Kenrick, in a 3-0 victory over Upton Park on November 11, 1871.[2]

Rovers greatest achievement was winning the FA Cup in 1879-80 with a 1-0 win over Oxford University at The Kennington Oval. Their 1880 FA Cup winning team was as follows:

Lloyd-Jones scored the only goal of the game.

The previous year, Clapham Rovers had also reached the final, but lost 1-0 to Old Etonians. In this match, Clapham Rovers' James Prinsep set a record for being the youngest player in an FA Cup Final, at 17 years and 245 days, a record that held until 2004 when it was broken by Millwall's Curtis Weston.

Clapham Rovers were also one of ten founder members of the Surrey County Football Association, in 1877.[3]

Rugby and the founding of the Rugby Football Union

The club's strength in rugby was borne out by their record. From 1870 to 1881 the club played 151 Rugby games, winning 80, losing 30, and drawing 41. During the 1870s they fielded a team that had four internationals: R. H. Birkett was captain, his brother, L. Birkett, and the Bryden brothers. Additionally Crampton, and Walker were well regarded forwards and Clapham was known to have "the strongest combination of the time behind the scrummage".[1]

On 26 January 1871, 32 members representing twenty-one London and suburban football clubs that followed Rugby School rules (Wasps were invited but failed to attend) assembled at the Pall Mall Restaurant in Regent Street. E.C. Holmes, captain of the Richmond Club assumed the presidency. It was resolved unanimously that the formation of a Rugby Football Society was desirable and thus the Rugby Football Union was formed. A president, a secretary and treasurer, and a committee of thirteen were elected, to whom was entrusted the drawing-up of the laws of the game upon the basis of the code in use at Rugby School. R. H. Birkett represented The Rovers and was one of the thirteen original committee members.[4] 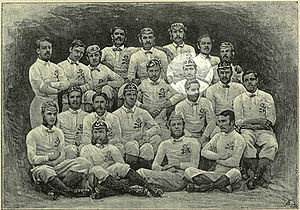 The first international rugby match was played between Scotland and England in 1871 and The Rovers provided R. H. Birkett.

When the club played one of the strongest and most well established clubs, Richmond, for the first time on the 21st October, 1871, they won the match by 1 goal and 2 tries. At the end of the 1870/71 season the club moved from Clapham Common, to a field at Balham, where they continued to play till 1876, when they moved to Wandsworth, where they were still playing in 1892.[1]

The date of the club's dissolution is unclear, although the last time they competed in the FA Cup was in the 1885-86 season, when they were disqualified without playing a match.[5] Their most successful player, Norman Bailey, was still described as a Clapham Rovers player when he made the last of his 19 England appearances on 19 March 1887.[6] The club was still playing in Wandsworth in 1892.[1] On Saturday 1 January 1898 The Times announced that Old Carthusians would play Clapham Rovers at Crystal Palace.

The club probably survived until World War One as there is a reference to their annual dinner in The Sportsman in 1911.

Eight Clapham Rovers players played for England between 1874 and 1887, who were as follows (caps in brackets):[7]

The following players represented "England" in the representative matches played between 1870 and 1872:

Since 1996 a Sunday league team has operated under the name Clapham Rovers; however this club has no formal connection to nor are they an officially-recognised continuation of the original club.