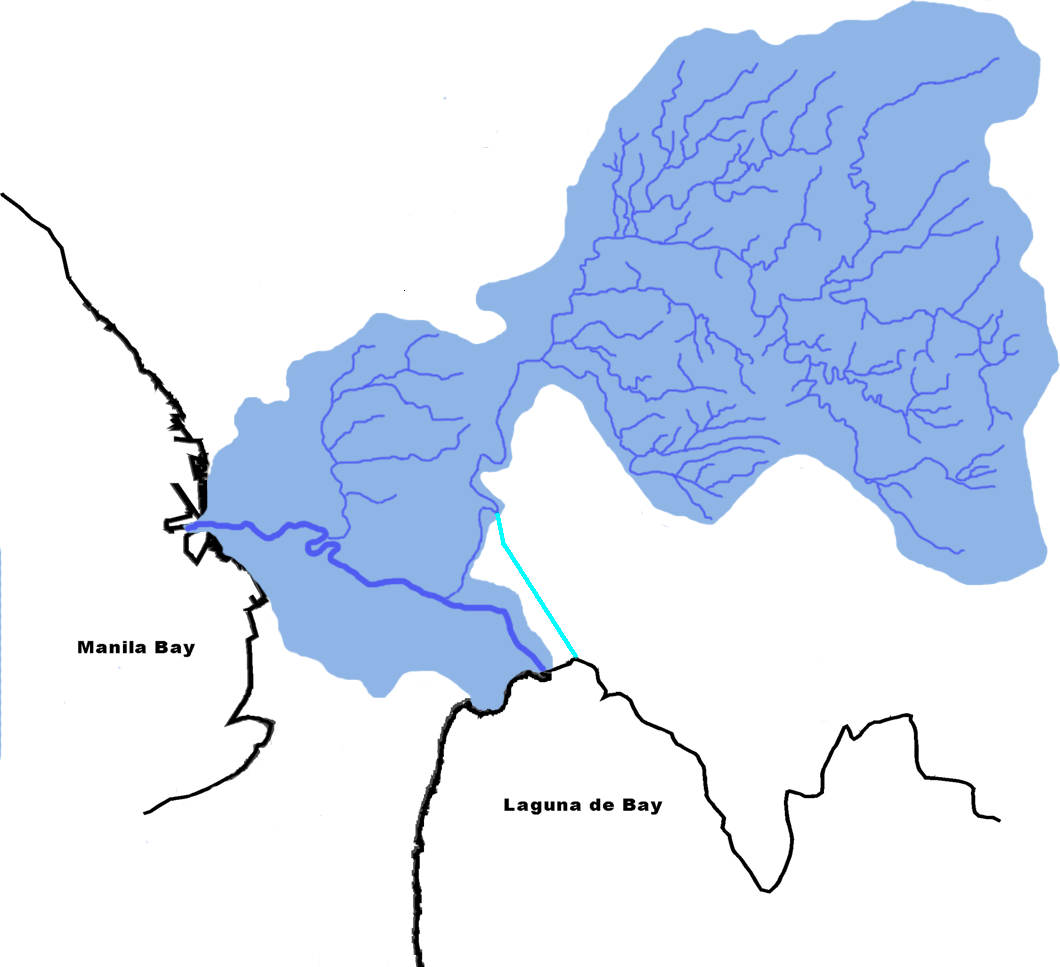 map_size =
map_caption = Drainage map of the Pasig-Marikina River systemThe Pasig River (called "Ilog Pasig" in Filipino) is a in the and connects (via the ) into . It stretches for convert|25|km|mi|1 and divides into two. Its major tributaries are the and San Juan River.

The Pasig River used to be an important transport route in Spanish . However, due to negligence and industrial development, the river has become very polluted and is considered dead (unable to sustain life) by s.

The (PRRC) was established to oversee rehabilitation efforts for the river. Supporting the PRRC are private sector organizations i.e. Clean and Green Foundation, Inc. who implemented the "Piso para sa Pasig" (Filipino: "A peso for the Pasig") campaign.

Pasig River winds generally north-westward for some convert|25|km|mi|1 from the , the largest lake in the Philippines, to , in the southern part of the island of . From the lake, the river runs between , and , before entering . This portion of Pasig River is known as the Napindan River. From its confluence with its tributary, the river then forms the common border between to the south and Pasig City, then to the north. The river then sharply turns northeast forming the border between Mandaluyong and before turning again westward, joining its other major tributary San Juan River, and then following a sinuous path through the center of Manila before emptying into the bay. The whole river and most portions of its tributaries lie entirely within , the metropolitan region of the capital. Isla de Convalescencia, the only island dividing the Pasig River, can be found in Manila and it is where the is located.

One major river that drains Laguna de Bay is the , which enters into Taguig before becoming the Pateros River and forming the common border between the municipality of and Makati City. Pateros River then enters the same confluence where the Napindan River and Marikina River meet. The Marikina River is the larger of the two major tributaries of Pasig River and it flows southwards from the mountains of and cuts through the . The San Juan River drains the plateau on which stands; its major tributary is the Diliman Creek.

Within the city of Manila, there are various "esteros" or canals that criss-cross through the city and connect with in the north and to the south.

There are a total of 13 s that cross the river. Crossing the Napindan Channel in Pasig City is the Bambang Bridge. Downstream is the C-5 Road Bridge connecting the cities of Makati and Pasig. The Guadalupe Bridge between Makati and Mandaluyong carries , the major highway of Metro Manila, as well as the Blue Line (Line 3) of the Metro Rail Transit (MRT). The Makati-Mandaluyong Boundary Bridge is another bridge that connects the two cities downstream and forms the end of Makati Avenue.

The easternmost bridge in Manila is the Lambingan Bridge in the district of Sta. Ana, followed by the Padre Zamora (Pandacan) Bridge between Pandacan and Santa Mesa, which also carries the southern line of the (PNR). The Mabini Bridge (formerly Nagtahan Bridge) provides a crossing for the Nagtahan Avenue, part of the C-2 Road. Ayala Bridge carries Ayala Boulevard and connects Isla de Convalescencia to both banks. Further downstream are the Quezon Bridge, the LRT Yellow Line (Line 1) bridge, McArthur Bridge, and the Jones Bridge. The last bridge near the mouth of Pasig River is the Roxas Bridge, formerly known as the Del Pan Bridge.

Pasig River's location and the subsequent growth of Manila and the surrounding settlements has made the river a focal point for development and historical events. The foremost landmark on the banks of the river is the walled district of Intramuros, located near the mouth of the river on its southern bank and was built by the Spanish colonial government in the 16th century. Further upstream is the , an orphanage located on Pasig's sole island, the Isla de Convalescencia. On the northern bank stands , the official residence of the .Also on Pasig River's northern bank and within the Manila district of Sta. Mesa is the main campus of the .

In Makati City, along the southern bank of Pasig, is the Sta. Ana Racetrack and the Rockwell Commercial Center, a high-end office and commercial area containing the Power Plant Mall. At the confluence of Pasig River and Marikina River is the Napindan Hydraulic Control Structure, which regulates the flow of water from the Napindan Channel.

The Pasig River's main watershed is concentrated in the plains between and . The watershed of the tributary mostly occupies the Marikina Valley, which was formed by the Marikina Fault Line. The is an artificially constructed waterway that aims to reduce the flooding in the Marikina Valley during the rainy season, by bringing excess water to the Laguna de Bay.

Pasig River is technically considered as a tidal estuary. Towards the end of the summer or dry season (April and May), the water level in Laguna de Bay reaches to a minimum of 10.5 meters. During times of , the water level in the lake may drop below that of Manila Bay's resulting into a reverse flow of seawater from the bay into the lake. This also results into increased pollution and salinity levels in Laguna de Bay at this time of the year. [ [http://www.llda.gov.ph/lake_level/lake_level_index.htm (Laguna de Bay) Lake Elevation] - Laguna Lake Development Authority]

The Pasig River is vulnerable to flooding in times of very heavy rainfall and the Marikina River tributary is the main source of the floodwater. The Manggahan Floodway was constructed to divert excess floodwater from the Marikina River into the Laguna de Bay, which then serves as a temporary reservoir. By design, the Manggahan Floodway is capable of handling 2,400 cubic meters per second of water flow, although the actual flow is about 2,000 cubic meters per second. To complement the floodway, the Napindan Hydraulic Control System (NHCS) was built in 1983 at the confluence of the Marikina River and the Napindan Channel to regulate the flow of water between Pasig River and the lake. [ [http://www.llda.gov.ph/masterplan.htm Laguna de Bay Masterplan] - Laguna Lake Development Authority]

Before the mass urbanization of Manila, the Pasig River served as an important means of transport and functioned as the city's lifeline and center of economic activity. The early Muslim settlements were established along the banks of this river and when the Spanish established Manila as the capital of their colonial properties in the Far East, they built the walled city of Intramuros on the southern bank of Pasig River near the mouth.

After , massive population growth, infrastructure construction, and the dispersal of economic activities to Manila's suburbs left the river abandoned. The banks ofthe river attracted informal settlers and remaining factories dumped their wastes into the river, making it effectively as a huge sewer system.

The increasing pollution in the river was first noticed in the 1930s when it was observed that fish migration from Laguna de Bay diminished. People ceased using the river's water for laundry in the 1960s and ferry transport declined. By the 1970s, the river started to give offensive smells and in the 1980s, fishing in the river became nonviable. Pasig River was considered biologically dead in the 1990s.

Efforts to revive the river began in December 1989 with the help of Danish authorities. The (PRRP) was established, with the Department of Environment and Natural Resources as the main agency with the coordination of the Danish International Development Assistance (DANIDA).

In 1999, President signed Executive Order No. 54 establishing the (PRRC) to replace the old PRRP with additional expanded powers such as managing of wastes and resettling of squatters.