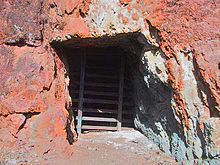 Gated entrance of an abandoned adit near Medford, Oregon, USA

An adit is an entrance to an underground mine which is horizontal or nearly horizontal,[1] by which the mine can be entered, drained of water,[2] and ventilated.

Adits are driven into the side of a hill or mountain, and are often used when an ore body is located inside the mountain but above the adjacent valley floor or coastal plain. In cases where the mineral vein outcrops at the surface, the adit may follow the lode or vein until it is worked out, in this case the adit is rarely straight. The use of adits for the extraction of ore is generally called drift mining.

Adits can only be driven into a mine where the local topography permits. There will be no opportunity to drive an adit to a mine situated on a large flat plain, for instance. Also if the ground is weak, the cost of shoring up a long adit may outweigh its possible advantages.

Access to a mine by adit has many advantages over the vertical access shafts used in shaft mining. Less energy is required to transport miners and heavy equipment into and out of the mine. It is also much easier to bring ore or coal out of the mine. Horizontal travel by means of narrow gauge tramway or cable car is also much safer and can move more people and ore than vertical elevators.

In combination with shafts, adits form an important element in the ventilation of a mine: in simple terms, cool air will enter through an adit, be warmed by the higher temperature underground and will naturally exhaust from vertical shafts,[citation needed] some of which are sunk specifically for this purpose and are known as "ventilation shafts".[3] 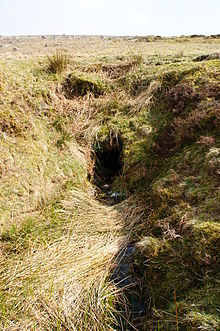 Most adits are designed to slope slightly upwards from the entrance so that water will flow freely out of the mine.[4] Mines that have adits can be at least partly drained of water by gravity alone or power-assisted gravity. The depth to which a mine can be drained by gravity alone is defined by the deepest open adit which is known as the "drainage adit".[5] Workings above this level (known as "above adit") will remain unflooded as long as the adit does not become blocked. All mine workings below both the drainage adit ("below adit") and the water table will flood unless mechanical means are used for drainage. Until the invention of the steam engine this was the main restriction on deep mining. Of course, adits are still useful for deeper mines because the water only needs to be raised to the drainage adit rather than to the surface.

Because of the great reduction in ongoing costs that a drainage adit can provide, they have sometimes been driven for great distances just for this purpose, one such being the Milwr tunnel in North Wales, which is about ten miles (16 km) long. Another example is the Great County Adit in Cornwall, a 40-mile (64 km)-long network of adits that used to drain the whole Gwennap mining area. A side benefit of driving such extensive adits is that previously unknown ore-bodies can be discovered, helping finance the enormous cost.[5]

Adits were in use in Cornwall well before 1500 and were particularly important to the tin and copper mines in Cornwall and Devon because the ore-bearing veins here are near-vertical and act as channels through which water can easily seep.[4] There are many reports of torrents of warm or hot water continuously pouring into the lower levels of Cornish mines.[citation needed]