"Dog of Death" is the nineteenth episode of The Simpsons' third season. It originally aired on the Fox network in the United States on March 12, 1992. In the episode, Santa's Little Helper falls ill and the Simpson family must make budget cuts in order to pay for his operation. Although the dog's life is saved, the family begins to feel the strain of their sacrifices and starts treating him badly, causing him to run away. Santa's Little Helper ends up in the possession of Mr. Burns, who trains him to become a vicious attack dog. Several days later, Bart stumbles upon the trained Santa's Little Helper and is attacked, but the dog eventually recognizes his old friend and stops.

The episode was written by John Swartzwelder and directed by Jim Reardon. The writers enjoyed the previous episodes centered on Santa's Little Helper and decided to create another one, which resulted in "Dog of Death". The episode features numerous references to popular culture, including the films The Incredible Journey and A Clockwork Orange, and the book The Lottery. Since airing, the episode has received positive reviews from television critics. It acquired a Nielsen rating of 14.2 and was the highest-rated show on the Fox network the week it aired.

Springfield is "in the grip of lottery fever" with a $130 million jackpot and, as a result, no one in the Simpson family notices that their pet dog, Santa's Little Helper, has become seriously ill. Once the dog is discovered to be sick, the family rushes him to the hospital where they learn that he needs a US$750 emergency operation of bloat. Homer is saddened to tell his children, Bart and Lisa, that the family simply cannot afford the operation. However, after seeing how much everyone loves the dog, especially Bart, he decides to find a way to pay for it.

In order to afford the operation, everyone in the family has to make sacrifices in their every day life, such as Homer having to give up on buying beer and Marge having to cook with lower-quality food and forgo her weekly lottery ticket. Bart must get his haircuts at a local barber school and Lisa can no longer get her volumes of "Encyclopedia Generica" at the grocery store. They eventually save up enough money for the operation, which becomes a success. The family is joyous that their dog is well again, but soon begins to feel the strain of their sacrifices. As a result, the family members take out their resentment on the dog. Feeling unloved, Santa's Little Helper runs away from home and goes off on an adventure, only to be captured, taken to the pound, and adopted by Mr. Burns, who trains him to become one of his vicious attack hounds. After a long brainwashing process, consisting of the Ludovico technique, Santa's Little Helper is turned into a bloodthirsty killer. 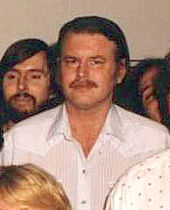 The episode was based on an experience writer John Swartzwelder had with his dog.

"Dog of Death" was written by long-time writer John Swartzwelder and directed by Jim Reardon.[5] The producers decided to create another episode centered on Santa's Little Helper as they enjoyed the previous ones, particularly season one's "Simpsons Roasting on an Open Fire", in which the Simpson family receives him.[6] Reardon commented that one of the hardest feats with the episode was to make Santa's Little Helper not express any human expressions, as the staff preferred animals on the show to behave exactly the way they do in real life.[7] The plot of "Dog of Death" was based on an experience Swartzwelder had with his own dog that also suffered from bloat. However, unlike the events in the episode, Swartzwelder's dog did not receive treatment as the operation was too expensive and the dog was too old.[6] The Gold Coast Bulletin's Ryan Ellem commented that the Simpson family's dilemma with the cost of the veterinary procedure is a "very real" dilemma that many families "who normally don't budget for a pooch's bung knee" face.[8]

"Dog of Death" also parodies lottery advertisements. In one commercial featured in the episode, an announcement states: "The state lottery, where everybody wins," while a tiny disclaimer at the bottom of the screen can be seen saying: "Actual odds of winning, one in 380,000,000."[13] During the peak of the lottery fever in Springfield, news anchor Kent Brockman announces on television that people hoping to get tips on how to win the jackpot have borrowed every available copy of Shirley Jackson's book The Lottery at the local library. One of them is Homer, who throws the book into the fireplace after Kent reveals that "Of course, the book does not contain any hints on how to win the lottery. It is, rather, a chilling tale of conformity gone mad."[14] In her book Shirley Jackson: Essays on the Literary Legacy, Bernice Murphy comments that this scene displays some of the most contradictory things about Jackson: "It says a lot about the visibility of Jackson's most notorious tale that more than 50 years after its initial creation it is still famous enough to warrant a mention in the world's most famous sitcom. The fact that Springfield's citizenry also miss the point of Jackson's story completely [...] can perhaps be seen as an indication of a more general misrepresentation of Jackson and her work."[14]

The episode contains several references to previous episodes of The Simpsons. For instance, Santa's Little Helper gets picked up by a car on a street called "Michael Jackson Expressway", a reference to the season three premiere episode "Stark Raving Dad" that Michael Jackson guest-starred in.[5] In another scene, Ned Flanders is seen wearing his "Assassin" running shoes from the season two episode "Bart's Dog Gets an F".[12] The flyer Homer replaces with the "lost pet" notice is Principal Skinner's "Have you seen my body?" flyer from "Bart the Murderer".[6][12]

"Dog of Death" first aired on the Fox network in the United States on March 12, 1992.[15][16][17] The episode finished 19th in the ratings that week, and beat its main competitor, The Cosby Show (NBC), which finished 28th.[18][19][20] "Dog of Death" acquired a Nielsen rating of 14.2, equivalent to approximately 13.1 million viewing households, which made The Simpsons the highest-rated show on the Fox network the week the episode aired.[21] Since airing, "Dog of Death" has received positive reviews from television critics. Tom Adair of The Scotsman considers it to be a classic episode of the show,[22] and Mark Zlotnick of UGO's DVDFanatic named it one of his personal favorites from season three.[23]

The episode's reference to A Clockwork Orange was named the tenth greatest film reference in the history of the show by Total Film's Nathan Ditum.[24] Nate Meyers of Digitally Obsessed gave "Dog of Death" a 3/5 rating and commented that people who like dogs will enjoy the episode, in part because of Mr. Burns' attack dog training program, which Meyers called a "brilliant reference to A Clockwork Orange." He added that the episode is unlikely to satisfy devoted fans, and the relationship between the family and Santa's Little Helper will not "register" to casual viewers; "Still, there are enough laughs (especially in the animal hospital) to keep the audience entertained."[25] DVD Movie Guide's Colin Jacobson also praised the parody of A Clockwork Orange, describing it as "possibly the funniest Clockwork Orange parody I've ever seen." Jacobson added that the episode as a whole offers "a terrific program. [...] From the cracks about the lottery and public hysteria that open the program to the calamities that befall the family when Santa's Little Helper gets sick to the bizarre escapades that greet the pooch when he splits, 'Dog of Death' provides a hilarious piece."[26]

The authors of the book I Can't Believe It's a Bigger and Better Updated Unofficial Simpsons Guide, Warren Martyn and Adrian Wood, praised several scenes from the episode, including Homer's dream of winning the lottery, Mr. Burns' brainwashing of Santa's Little Helper, and the closing line of the episode that "No dogs were harmed in the filming of this episode. A cat got sick, and someone shot a duck. But that's it."[9] Bill Gibron of DVD Verdict commented that Santa's Little Helper's "twisted stomach means the family must budget themselves to pay for the surgery, and the results are some of the best lines in the history of the show. From 'lousy chub night' to 'mmmm, snouts,' the hard knock life seems to enliven Homer into one sarcastic bastard."[27] Mikey Cahill of the Herald Sun named this episode's chalkboard gag, "I saw nothing unusual in the teacher's lounge", the third best chalkboard gag in the show's history.[4]