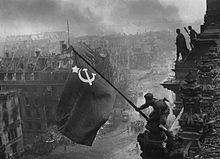 Raising the Banner of Victory 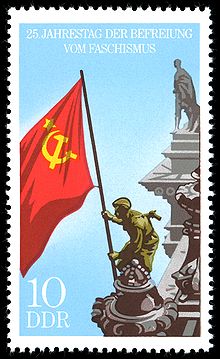 The Banner of Victory on East German postage stamp

Meliton Varlamovich Kantaria or Kantariya (Georgian: მელიტონ ქანთარია, Russian: Мелитон Варламович Кантария) (5 October 1920, Jvari, Georgia, – 27 December 1993, Moscow), Hero of the Soviet Union (8 May 1946), was a Georgian sergeant of the Soviet Army credited to have together with M. A. Yegorov hoisted a Soviet flag Banner of Victory over the Reichstag on April 30, 1945.[1]

Born to a peasant family in a small Georgian town of Jvari, he worked in kolkhoz until being mobilized in the Red Army in 1940. During World War II, he served in the 756th Rifle Regiment, 150th Rifle Division, of the 3rd Shock Army at the 1st Belorussian Front. He, together with Sergeant M.A. Yegorov, mounted a red banner in a famous photo over a defeated Reichstag on the 1 May 1945.[2]

Demobilized in 1946, he lived thereafter in Sukhumi working as a statal shop manager. Afilied PCUS in 1947. A year after the secessionist war in the region had begun he moved with his family to Moscow[3] where he died two months later in December 1993 in the Kremlin hospital.