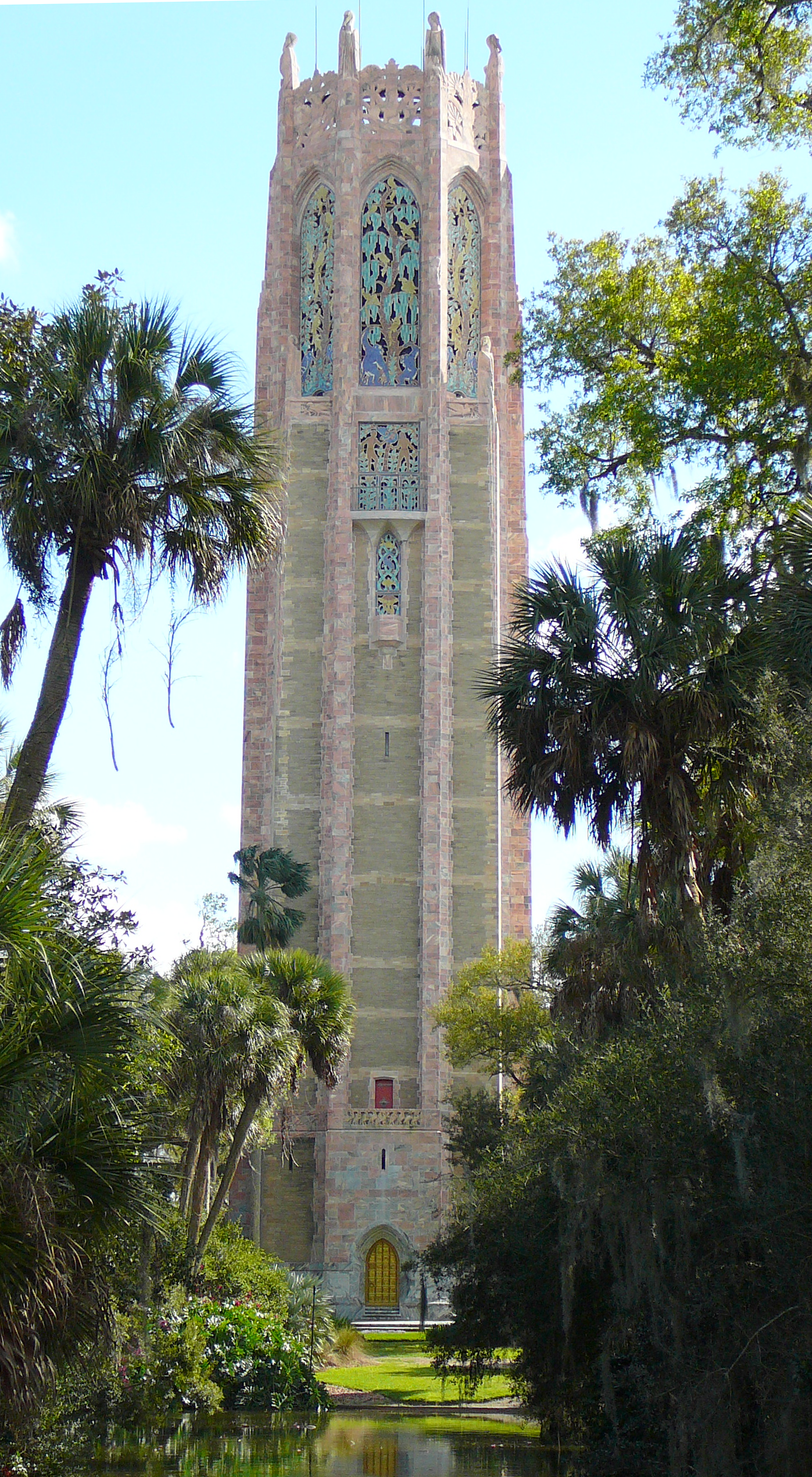 Bok Tower Gardens (250 acres, 1 square kilometer) is the popular name for a site containing s, a tower, and several other facilities located on the grounds of the Historic Bok Sanctuary at 1151 Tower Boulevard, north of Lake Wales, , . It is a that is listed on the .

Historic Bok Sanctuary is open daily and an admission fee is charged. It comprises the gardens, the "Singing Tower" with its carillon bells, Pine Ridge Trail, Pinewood Estate, and a visitor center. The tower sits on Iron Mountain, one of the highest points of r Florida, estimated to be convert|295|ft|m above . [ [http://terraserver-usa.com/image.aspx?T=2&S=11&Z=17&X=1107&Y=7725&W=3 Terraserver map of Iron Mountain in Lake Wales, FL] ]

The gardens began in 1921 when , editor of the popular women's magazine "" and his wife, Mary Louise Curtis Bok, who would found the in Philadelphia in 1924, were spending the winter beside 's Lake Wales Ridge and decided to create a bird sanctuary on its highest hill (298 feet above sea level, 91 meters).

Bok commissioned noted to transform what then was an arid sand hill into "a spot of beauty second to none in the country". The first year was spent digging trenches and laying pipes for irrigation, after which soil was brought to the site by thousands of truck loads and plantings began. The Olmsted plan included the planting of 1,000 large s, 10,000 s, 100 sabal palms, 300 s, and 500 s, as well as hundreds of fruit shrubs including and .

Attempts were made to introduce s to the sanctuary several times, which is why early renderings of the tower show flamingos at the reflection pool rather than swans. These early efforts were unsuccessful, however, as the flamingos were not native to central Florida and could not survive the winters that were cooler than those of southern Florida where they may be found. Under construction for over five years, Bok Tower Gardens was dedicated by President on , . [Anonymous. "U. S. Taj". Time, Monday, Feb. 11, 1929. [http://www.time.com/time/magazine/article/0,9171,737310,00.html] ] Edward Bok died in 1930, and was interred at the base of the tower. [Anonymous> "Story-Book Bok". Time, Monday, Jan. 20, 1930. [http://www.time.com/time/magazine/article/0,9171,738446,00.html] ]

Frederick Law Olmsted, Jr. designed the meandering gardens of Historic Bok Sanctuary to feature acres of ferns, palms, oaks, pines, and wetland plants. The plantings also include trees, s, tree s, creeping , yaupon and dahoon , Asiatic jasmine, , crinum and spider , , , date and , , , blue , and horsetail rush (""). The site is a refuge for more than a hundred bird species, the most prominently featured of which is the group of s, who tend to stay near the reflection pool.

Although the gardens provide an assortment of native wildlife including birds, reptiles, and butterflies, the gardens also are well known for a large population of squirrels that exhibit no fear of humans and often can be hand-fed.

The Singing Tower is the centerpiece of the gardens. The tower was built at the highest elevation of the site, south of a reflection pool that allows the water to reflect its full image. A 60-bell set within the convert|205|ft|m|sing=on tall, Late Gothic Revival tower that was designed by architect . Construction on the tower began in 1927 and was completed for the dedication of the gardens. The tower is convert|51|ft|m square at its base, changing form at convert|150|ft|m high to an octagon with convert|37|ft|m sides that include sculptures designed by . The tower is surrounded by a convert|15|ft|m|sing=on moat that serves as a pond.

Although the tower's interior is not open to the public, it contains the , said to be the largest carillon library in the world.

Inside the bell chamber is a playing room that houses a , or keyboard, that is used for playing the carillon bells. Recitals are given daily from the 60-bell carillon set.

The Pine Ridge Nature Preserve and Trail is an ecosystem typified by an over-story of and a dense groundcover of perennial grasses that includes a nature trail that extends for three-quarters of a mile, a bog garden, an open glade, and a sand hill forest community.

Eight acres of the sanctuary include the Pinewood Estate, which features a twenty-room mansion. This mansion was built in the early 1930s by , an early twentieth-century steel industrialist. The sanctuary features several events at this mansion during the year.

Throughout the year, there are numerous events designed to draw visitors to the sanctuary. These events include various concerts featuring folk music, jazz, orchestras, and the carillon bells of the Tower. The most popular is the semi-annual Concert Under the Stars, given in the evening once in the Fall and once in the Spring. The event draws hundreds of visitors to the large field in front of the Tower for an outdoor picnic; and features music from both the symphony orchestra and carillon bells.Fact|date=July 2008