Elections for the Council in the London Borough of Croydon are held every four years to elect 70 councillors. At the last elections, which were held in May 2010, 37 Conservative councillors and 33 Labour councillors, providing a Conservative majority of 4 seats.

In 2002, Labour held Croydon with a tiny majority of votes in its marginal wards - one councillor won by just eight votes - and it was inevitable that in the 2006 election the fight would be keenly fought and closely observed. In the end, the Conservatives won 43 seats on the Council, defeating the lone Liberal Democrat and taking ten Labour seats in Waddon, Addiscombe, South Norwood and Upper Norwood.

Leaders of the council

The controlling and majority group in the borough is the Conservative Party. Since the 2010 election the composition has been:[1] 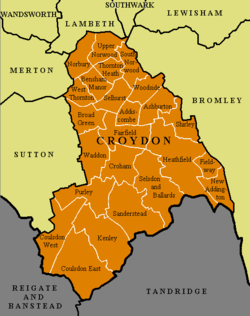 The 24 electoral wards of the London Borough of Croydon

In the 2010 elections Labour gained 6 seats from the Conservatives, giving the council's political composition as:[7]