Caption = The great saphenous vein and landmarks along its course 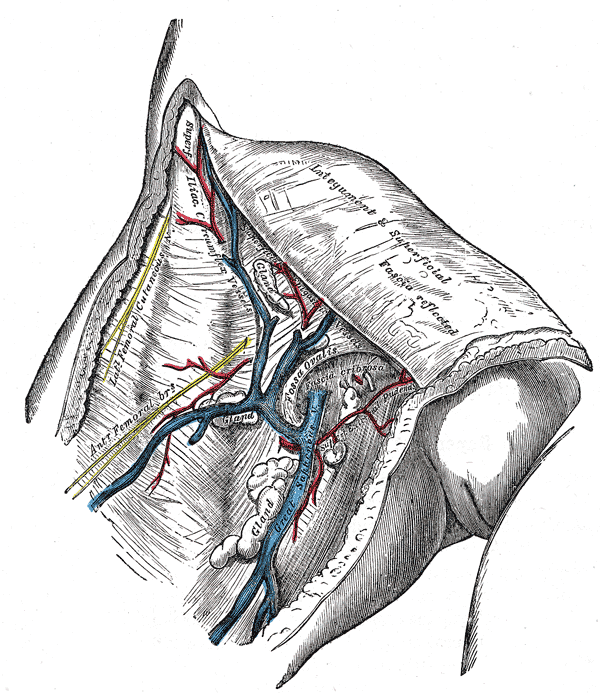 Caption2 = The great saphenous vein and its tributaries at the fossa ovalis in the .
DrainsFrom =
Source = , and others
DrainsTo =
Artery =
MeshName = Saphenous+Vein
MeshNumber = A07.231.908.819
DorlandsPre = v_05
DorlandsSuf = 12851675
The great saphenous vein (GSV), also greater saphenous vein, is the large (subcutaneous) of the and . First described by the Persian physician in the 11th century, it derives its name from the term 'Safin' meaning hidden. It travels mostly in its own fascial compartment in the thigh and is hence 'hidden'.

The GSV originates from where the dorsal vein of the (the large toe) merges with the .

After passing anterior to the (where it often can be visualized and palpated), it runs up the side of the leg.

At the knee, it runs over the posterior border of the of the femur bone.

The great saphenous vein then courses laterally to lie on the anterior surface of the thigh before entering an opening in the called the .

It joins with the in the region of the .

At the ankle it receives branches from the sole of the foot through the ; in the lower leg it anastomoses freely with the , communicates with the anterior and posterior tibial veins and receives many cutaneous veins; in the thigh it communicates with the and receives numerous tributaries; those from the medial and posterior parts of the frequently unite to form a large "accessory saphenous vein" which joins the main vein at a variable level.

Near the fossa ovalis it is joined by the , , and veins.

A vein, named the "thoracoepigastric", runs along the lateral aspect of the trunk between the below and the above and establishes an important communication between the and veins.

Use in cardiovascular procedures

The vein is often removed by s and used for in coronary artery bypass operations, when arterial grafts are not available or many grafts are required, such as in a or .

The great saphenous vein is the conduit of choice for s, [Muhs BE, Gagne P, Sheehan P. Peripheral arterial disease: clinical assessment and indications for revascularization in the patient with diabetes. Curr Diab Rep. 2005 Feb;5(1):24-9. PMID 15663913.] [Mamode N, Scott RN. Graft type for femoro-popliteal bypass surgery. Cochrane Database Syst Rev. 2000;(2):CD001487. PMID 10796649.] when available, for doing operations because it has superior long-term patency compared to synthetic grafts (, (Dacron)), s or biosynthetic grafts [Omniflow] . Often, it is used "" (in place), after tying off smaller tributaries and stripping the with a device called .

The is a branch of the that runs with the great saphenous vein and is often damaged in surgeries that make use of the similarly named vein.

When emergency resuscitation with fluids is necessary, and standard access can not be achieved due to venous collapse, saphenous vein cutdown may be necessary.

Pathology of the saphenous vein

of the great saphenous vein is relatively common, but in isolation typically not life threatening.

* s: The great saphenous vein, like other s, can develop varices, which are generally considered to be unsightly. Various treatment options exist for treating s. Varicose veins are not life threatening.