Wels is the second largest city of the state of Upper Austria, located in the north of Austria, on the Traun River near Linz. It is not part of its surrounding Wels County (Bezirk Wels-Land), but a so-called Statutarstadt (independent city). However, Wels is the county seat of Wels-Land. 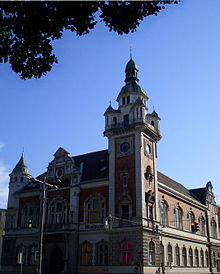 The area of Wels has been settled since the Neolithic era and gained importance in Roman times because of its central location in the province of Noricum. Around the year 120, Wels received Roman city rights under the name of Municipium Ovilava. Around 215, it was named Colonia Aurelia Antoniana Ovilabis by Emperor Caracalla. At that time, the city already had 18,000 inhabitants. However, Wels completely lost its importance with the end of Roman rule.

Wels served as a minor trading centre during the Middle Ages. In 1222, during the rule of the Babenberger family, Wels again received city rights. A document dating to 1328 provides evidence for Wels' important role as the location of a market. Its endowment with economic privileges, and its advantageous position on several rivers allowed it to gain an important position in the region.

Emperor Maximilian I died in Wels on January 12, 1519, after having been denied access to Innsbruck by its citizens.

During World War II, a subcamp of Mauthausen concentration camp was located here.[2]

On January 18, 1964, Wels became a Statutarstadt of Austria.

There are about 36,000 people employed in Wels. Of that, about 63% are in the service sector. Wels is known as an important city for shopping and the location of several gymnasiums (grammar school) and higher vocational schools and also of a vocational college. Furthermore, it is famous for the Wels Fair, which takes place every two years in the autumn.