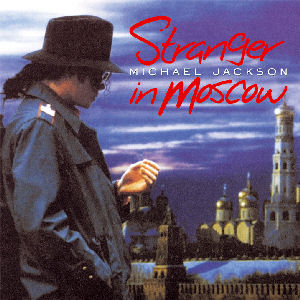 "Stranger in Moscow" was written in 1993 during Jackson's "Dangerous" World Tour in . He mentions that outside his hotel room, all he could see was "a sea of faces of fans chanting and screaming" and that he felt "all alone", like he was "the last person on the planet". It was this particular instance (on that particular day) that "Stranger in Moscow" came together.

The song's shows Jackson walking down a street while everything except himself and other primary subjects are moving in slow motion. , who wrote Rock With You and Thriller for Jackson, believes this is his best song.

Contrary to belief and what is shown on the single cover, the black-and-white video for "Stranger in Moscow" wasn't shot in Moscow nor was it intended to look like it. It was filmed in Los Angeles. It depicts a typical American city on a rainy day.

Toward the end of the song, a low background male voice speaks Russian and says the following: "Зачем ты приехал к нам, враг от Запада? Признайся! Он приехал, чтобы украсть у нас великие достижения народа, великие труды рабочих" (translation: "Why did you come to us, you, enemy from the West? Tell the truth! He came to steal the great achievements of the people, the great accomplishments of the workers").

The song's lyrics contain the phrase " of the brain", the same phrase Jackson used in 1994 (a year before the release of the album) in an interview with "Ebony Magazine" to describe the 1993 allegations.

The single was a success in , reaching the top of the charts in , and #4 in the UK, where it stayed in the top 40 for five weeks during the period. It was the least successful single release from the "HIStory - Past, Present and Future, Book I" album, but maintained the trend of having top-5 hits within the UK, where the album proved to be Jackson's most successful singles album to date.

Remixes of the song helped it reach the #1 spot on the UK Dance Chart (staying at the top for 5 weeks), #1 in the UK Club Chart, and #1 on the official Euro DJs chart. This meant that it was Jackson's biggest club hit and one of the biggest club hits from a mainstream commercial artist.

The song was performed on the "HIStory" World Tour, replacing "Human Nature". Jackson incorporates a mixture of physically complicated dance techniques such as the robot and popping during a set. He almost always opens the song with his "four-corner moonwalk" step in which Jackson moonwalks while pivoting his heels in a circular motion. He also usually showcases a variety of floating steps. Much like in the style of "", the song is extended at the end with a revamp of the drum line. Here, Jackson often does the moonwalk (a move generally set aside for use in "Billie Jean" only) followed by a spin and a pose stricken on the downbeat which closes the song.

This song has also been covered by , employing the famous startup chime as the bass-line throughout.