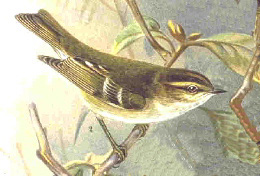 The Yellow-browed Warbler or Inornate Warbler, ("Phylloscopus inornatus") is a which breeds in east from the Urals to . This warbler is strongly migratory and winters in southeast .

This is an abundant of lowland and mountain woodlands. The nest is built in a tree. Like most s, this small is insectivorous.

This tiny warbler is prone to vagrancy as far as western in late September and October, despite a 3000 km distance from its breeding grounds. For example, this species occurs in late autumn in regularly enough that it is not classified as rare there.

This is one of the smallest warblers, 9.5-10 cm long, and shares greenish upperparts and off-white underparts with typical leaf warblers. However, it has prominent double wing bars and long supercilia. The only real possibility of confusion is with Hume's Leaf Warbler, which has duller colours, a faint second wing bar and dark legs and lower mandible, in the limited area of overlap; their vocalizations are clearly distinct.

This bird is not shy, but its arboreal life style makes it difficult to observe. It is constantly in motion. Its song is weak and high pitched; the call is faintly disyllabic.