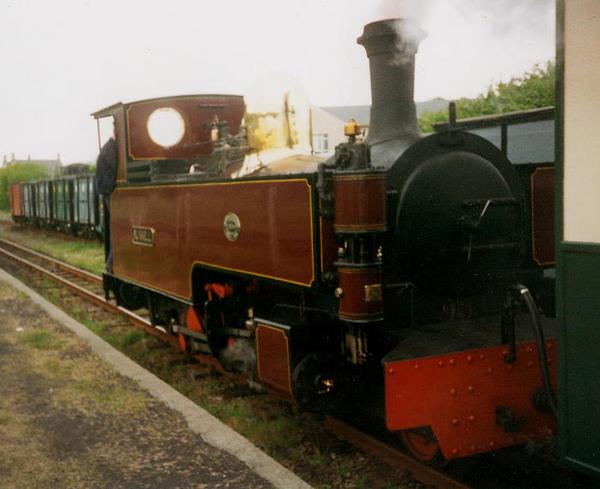 Russell is an over 100 year old narrow gauge originally built for the (NWNGR), but most famously associated with the original (WHR), and currently undergoing a rebuild at the .
There have been a number of books written either about, or containing details of the engine, but the succinct parts are detailed below. For further information please see [http://www.frheritage.org.uk/wiki/Russell here]

"Russell" has a complex history.

* 1924 after the WHR was taken over by the neighbouring (FfR), "Russell" was reduced in height in order to allow it to work trains on the FfR. The Ffestiniog's bridges and tunnels were built to a restrictive . The work entailed lowering Russell's chimney, steam dome and cab; however the locomotive was still too wide and could not pass through the long Moelwyn tunnel.

* 1937 the WHR closed, with "Russell" running the last through train. The locomotive was left in the sheds at Dinas

* 1941 requisitioned for war service, refurbished by the , and sent to the in . It was converted to a 0-6-2T after frequent derailments on the industrial tracks

* 1953 commonly believed to have been laid up after breaking a driving axle...

* 1974 moved from Carnforth to Hills & Bailey Ltd. at for further overhaul work

* 1987 steamed again at the Gelerts Farm Works and has since operated trains regularly on the .

* 2000 visited the Welsh Highland Railway (Caernarfon) and operated trains on the occasion of the official reopening of the line between Dinas and Waunfawr.

* 2005 a full overhaul was begun, with the aim of running again between Porthmadog and Dinas, on the completed Welsh Highland Railway.

A 2-6-2T steam locomotive, the design of Russell is more closely related to Hunslet No 865 of 1905 otherwise known as Leeds Number 1, although certain engineering aspects can be more readily associated with design of locomotives supplied to the . One of the driving wheel centres bears the initials SLR, however this has been found to have been a later replacement and not as originally supplied. Originally built with air train brakes, it was converted to vacuum train brakes following the linking of the Welsh Highland and Ffestiniog Railways. It was fitted with air and vacuum brakes following restoration.

A character, "Fearless Freddie", based on this locomotive, appears in the children's TV series .