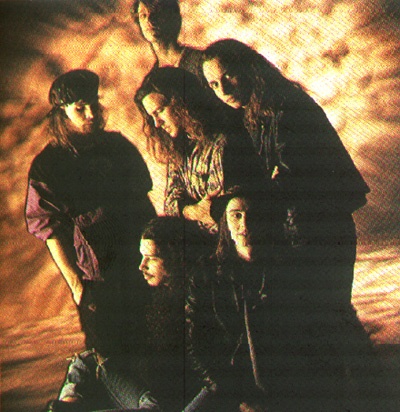 Temple of the Dog was an American rock band that formed in , in 1990. It was conceived by of as a tribute to his friend, the late , lead singer of and . The line-up included on rhythm guitar, on bass guitar (both ex-members of Mother Love Bone), on lead guitar, on drums and , providing backing vocals.

The band released its only album, the self-titled "Temple of the Dog", in April 1991 through . Although earning praise from music critics at the time of its release, the album was not widely recognized until 1992, when Vedder, Ament, Gossard and McCready had their commercial breakthrough with .

Temple of the Dog was started by singer , who was a roommate of , the lead singer of and .

The recorded material was slow and melodic; much different musically from the aggressive of Soundgarden. [cite web|title=A conversation with Chris Cornell part 2|author=O'Brien, Clare|publisher=Chris Cornell Fan Page|url=http://www.chriscornell.org.uk/articles/conversationwithchriscornellpart2.htm|accessdate=2007-10-03|date=] That is why Cornell approached Wood's former bandmates, and —who were still figuring out how to continue without Mother Love Bone—with the intention of releasing the songs as a single. Ament described the collaboration as "a really good thing at the time" for him and Gossard that put them into a "band situation where we could play and make music." The band's lineup was completed by the addition of Soundgarden (and later ) drummer and future Pearl Jam lead guitarist . They named themselves Temple of the Dog, after the lyrics in a Mother Love Bone song, "Man of Golden Words".

The band started rehearsing "Reach Down" and "Say Hello 2 Heaven" and other songs written by Cornell on tour prior to Wood's death, as well as re-working some existing material from demos written by Gossard, Ament, and Cameron.

The release of a single was soon deemed a "stupid idea" by Cornell and dropped in favor of an EP, or . The album was recorded in only 15 days, produced by the band themselves. Gossard described the recording process as a "non-pressure filled" situation, as there were no expectations or pressure coming from the record company. , who had flown from San Diego to to audition to be the singer of Mookie Blaylock (which eventually became Pearl Jam), ended up providing backing vocals.

"Temple of the Dog" was released on April 16, 1991 through and initially sold 70,000 copies in the . Ament recalled that they requested a Pearl Jam sticker on the cover—as they had just picked their new name—because "it'll be a good thing for us", but they were refused. The album received favorable reviews, [cite web|title=((( Temple of the Dog > Biography )))|author=Erlewine, Stephen Thomas|publisher=|url=http://wc10.allmusic.com/cg/amg.dll?p=amg&sql=11:dpfyxqt5ld6e~T1|accessdate=2007-10-03] but failed to chart. Contemporary critic Steve Huey, from , rated it with four and a half stars out of five, [cite web|title=((( Temple of the Dog > Review )))|author=Huey, Steve|publisher=|url=http://wc06.allmusic.com/cg/amg.dll?p=amg&sql=10:09fuxq85ldde~T1|accessdate=2007-10-03] while from "" wrote—in retrospective—that it "deserves immortality." [cite web|title=Temple of the Dog: Temple of the Dog: Review|author=Fricke, David|publisher=""|url=http://www.rollingstone.com/reviews/album/301499/review/5944099?utm_source=Rhapsody&utm_medium=CDreview|accessdate=2007-10-03|date=] The band members were pleased with the material, as it achieved its purpose; Cornell believed that "Andy really would have liked" the songs, and Gossard also asserted that he thought Wood would be "blown away by the whole thing." Soon after the album's release, Soundgarden and Pearl Jam started recording and Temple of the Dog broke up.

In the summer of 1992, the album received new attention. Although the album had been released more than a year earlier, A&M Records realized that they had in their catalog what was essentially a collaboration between Soundgarden and Pearl Jam, who had both risen to mainstream attention in the months since the album's release. A&M decided to re-issue the album and promote "Hunger Strike" as a single, with an accompanying . The attention allowed both the album and single to chart on "Billboard", and resulted in a boost in album sales. "Temple of the Dog" ended up selling more than a million copies, achieving platinum certification by the . [cite web|title=Gold & Platinum Searchable Database - Search Results - Temple of the Dog|publisher=|url=http://www.riaa.com/goldandplatinumdata.php?resultpage=1&table=SEARCH_RESULTS&action=&title=&artist=Temple%20of%20the%20Dog&format=&debutLP=&category=&sex=&releaseDate=&requestNo=&type=&level=&label=&company=&certificationDate=&awardDescription=&catalogNo=&aSex=&rec_id=&charField=&gold=&platinum=&multiPlat=&level2=&certDate=&album=&id=&after=&before=&startMonth=1&endMonth=1&startYear=1958&endYear=2007&sort=Artist&perPage=25|accessdate=2007-10-03]

In a recent interview with , Cornell stated he would be open for a Temple of the Dog reunion, or "some collaboration with any combination of those guys." He also revealed that Temple of the Dog was the reason he joined , as the experience made him "keep an open mind" about collaborations with musicians from other bands.

The only time Temple of the Dog played a full one hour set was while rehearsing and writing the material for the album. The band (with the exception of Vedder) performed in at the Off Ramp Café on November 13, 1990.

*allmusicguide|11:dpfyxqt5ld6e|Temple of the Dog
*last.fm