Masolino da Panicale (nickname of Tommaso di Cristoforo Fini; c. 1383 – c. 1447) was an Italian painter. His best known works are probably his collaborations with Masaccio: Madonna with Child and St. Anne (1424) and the frescoes in the Brancacci Chapel (1424–1428).

Masolino ("Little Tom") was born in Panicale. He may have been an assistant to Ghiberti in Florence between 1403 and 1407.[1] In 1423, he joined the Florentine guild Arte dei Medici e Speziali (Doctors and Apothecaries), which included painters as an independent branch. He may have been the first artist to create of oil paintings in the 1420s, rather than Jan van Eyck in the 1430s, as was previously supposed.[2] He spent many years traveling, including a trip to Hungary from September 1425 to July 1427 under the patronage of Pipo of Ozora, a mercenary captain. He also worked in Rome and Todi. He spent his later years, after 1435, working for Cardinal Branda Castiglione in Castiglione Olona.[3] 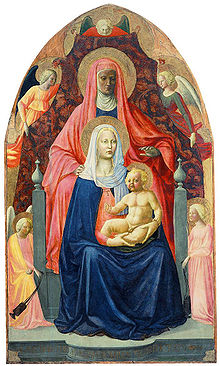 Madonna and Child, Saint Anne and the Angels 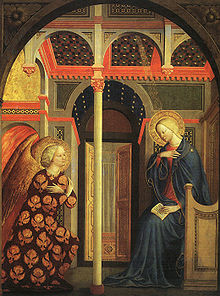 The Annunciation, National Gallery of Art

In the United States: