Mushroom Studios was a music recording facility located in Vancouver, British Columbia, Canada with a long history in Canadian music. It has now been relocated to Toronto, Ontario, Canada.

Notable as the location that many classic albums had been recorded, including those by: Heart, Bachman–Turner Overdrive, Loverboy, Queensrÿche, Skinny Puppy, 54-40, Spirit of the West, Jane Siberry and Sarah McLachlan. 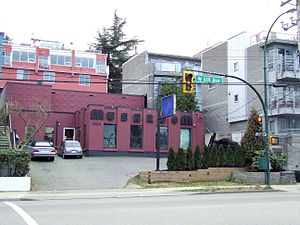 In 1946, one of Canada's first studios named Aragon Recording Studios was opened in Vancouver, aided by Al Reusch. Reusch was a musician, big band leader, and one of Vancouver's first DJs. By 1954, Reusch acquired sole ownership of Aragon Studios which would lead to the construction of Mushroom Studios.

The "home" of Mushroom Studios was built in 1966 at 1234 West 6th Avenue, Vancouver. Built by Aragon from the ground up as a first class audio recording studio, it was an orchestral recording room for special sessions by the Canadian Broadcasting Corporation. Dr. Howard Tremaine, who wrote the standard reference book of the audio industry, "The Audio Cyclopedia" consulted on the original acoustic design and equipment installation. One of the first clients was Diana Ross and The Supremes, and later Led Zeppelin would also recorded there.

Within five years, Reusch (who apparently did not like the idea of recording post-Beatles rock and roll) would sell the facility to Jack Herschorn. Herschorn had previously co-founded Studio 12 on West 12th Avenue with Tom Northcott. Herschorn appointed Mike Flicker as Chief Engineer, Howard Leese as program manager and Charlie Richmond as Head Technical Advisor.

Herschorn bought the Universal Audio vacuum tube mixing console from United Western Recorders in 1971. Custom built by Bill Putnam, it had been housed in United Studio A at 6050 Sunset Boulevard, Hollywood since 1957, and recorded hundreds of hits by such artists as Bing Crosby, Nat "King" Cole, Frank Sinatra and Ray Charles. Jack had the console, along with other purchases, shipped to Vancouver and installed in Aragon.

In a sponsorship deal, the studios were named "Can-Base Studios" and later renamed to the current "Mushroom Studios" name. The studio gained prominence when Heart's hit debut album Dreamboat Annie was recorded at the studio.

The studio was updated in the 1980s to accommodate over 50 musicians in semi-isolated concert format to do film scoring for dozens of feature films and movies of the week from Chuck Norris to a redo of The Dirty Dozen. The studio was recognized for the film score album of Top Gun.

In 2006, Rob Darch, owner of Hipposonic Studios, bought the building from John Wozniak of Marcy Playground fame who owned and operated the studio for seven years (1999–2006). However the gear was not part of the purchase and only remained at Hippowest for use by clients.

At the end of 2010, the console, famous for its unique sound qualities and range of variation, and all electronic gear, were moved cross country to a new location on Queen Street West in Toronto, Ontario, and custom installed. The warm sounds produced by this console have endeared Mushroom Studios to many artists and producers over the years and it is once again, fully operational and dedicated to recording music and is currently operated by a team at Mushroom/Swingset under the guidance of John Wozniak.