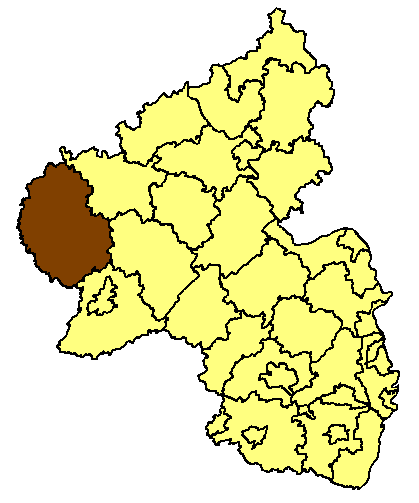 The Eifelkreis Bitburg-Prüm is a district in , . It is bounded by (from the west and clockwise) , and the districts of Euskirchen, , and .

There are three different historical regions: the abbey and the city of Prüm have been directly subordinate to the Holy Roman Emperor in medieval times; later the free city became the principality of Prüm, occupying large portions in the north.

The southwest including the town of Bitburg was a part of from the 10th to the 15th century. Later it was a part of the and hence under Spanish resp. n rule. After the it was decided to hand this region over to .

The eastern parts of the district, including the town of Kyllburg, were property of the .

On January 1 2007 the full name of the district was changed to be "Eifelkreis Bitburg-Prüm" instead of "Landkreis".

The district covers the sparsely populated southwestern part of the Mountains. The portions along the western borders are occupied by a common German-Belgian nature park and a German-Luxembourgian nature park. A great number of rivers rise from the Schneifel in the northwest and from the Kyllwald in the east, and runs southward to the River (French "Sûre"), which is an affluent of the Moselle.