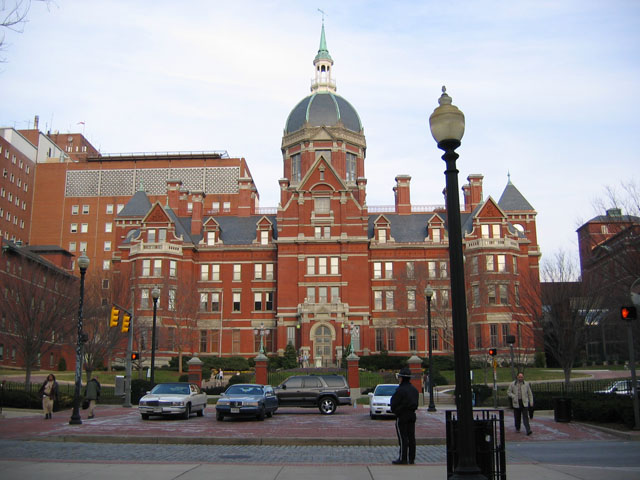 The Johns Hopkins Hospital is a in (USA). It was founded using money from a bequest by . It is widely regarded as one of the world's greatest hospitals [ [http://www.amazon.com/Here-My-Hope-Inspirational-Hospital/dp/product-description/0385500327 Amazon.com: Here is My Hope: A Book of Healing and Prayer: Inspirational Stories of Johns Hopkins Hospital: Randi Henderson,Richard Marek: Books ] ] , and it has been ranked by as the best hospital in America for 18 consecutive years. [ [http://health.usnews.com/articles/health/best-hospitals/2008/07/10/best-hospitals-honor-roll.html "America's Best Hospitals 2008: Johns Hopkins Hospital"] "", Accessed August 6, 2008.]

The hospital's main medical campus in East Baltimore is served by the easternmost station on the Baltimore Metro Subway.

Johns Hopkins, a Baltimore merchant and banker, left an estate of $7 million when he died on Christmas Eve 1873, at the age of seventy-eight. In his will, he asked that his fortune be used to found two institutions that would bear his name: "The Johns Hopkins University" and "The Johns Hopkins Hospital." At the time that it was made, Hopkins' gift was the largest philanthropic bequest in the history of the United States. Toward the end of his life, Hopkins selected twelve prominent Baltimoreans to be the trustees for the project and a year before his death, sent a letter telling them that he was giving "thirteen acres of land, situated in the city of Baltimore, and bounded by Wolfe, Monument, Broadway and Jefferson streets upon which I desire you to erect a hospital." He wished for a hospital "which shall, in construction and arrangement, compare favorably with any other institution of like character in this country or in Europe" and directed his trustees to "secure for the service of the Hospital, physicians and surgeons of the highest character and greatest skill." [Harvey, A.M., Brieger, G.H., Abrams, S. L., McKusick, V.A.," A Model of Its Kind, A Centennial History of Medicine at Johns Hopkins", Johns Hopkins University Press (Baltimore) 1989.]

Most importantly, Hopkins told the trustees to "bear constantly in mind that it is my wish and purpose that the [hospital] shall ultimately form a part of the Medical School of that university for which I have made ample provision in my will." By calling for this integral relationship between patient care, as embodied in the hospital, and teaching and research, as embodied in the university, Hopkins laid the groundwork for a revolution in American medicine. Johns Hopkins' vision, of two institutions in which the practice of medicine would be wedded to medical research and medical education was nothing short of revolutionary.

Initial plans for the hospital were drafted by surgeon , and the architecture designed by and completed by of the Boston firm of Cabot and Chandler in a Queen Anne style. [Dorsey, John & Dilts, James D., "Guide to Baltimore Architecture" (1997) p. 203-4. Tidewater Publishers, Centreville, Maryland ISBN 0-87033-477-8] When completed in 1889 at a cost of $2,050,000, the hospital included what was then state-of-the art concepts in heating and ventilation to check the spread of disease.

The Johns Hopkins Hospital was the birthplace of many medical specialties, including , , , and . [ [http://www.hopkinsmedicine.org/about/history/index.html "JHM History"] "", Accessed August 7, 2008.] Two of the most far-reaching advances in medicine during the last 25 years were also made at Hopkins. First, the Nobel Prize-winning discovery of gave birth to the genetic engineering industry. Second, the discovery of the brain's natural has triggered an explosion of interest in pathways and functions. Other accomplishments include the identification of the three types of and the first "blue baby" operation, which opened the way to modern . [ [http://www.hopkinsmedicine.org/about/history/index.html "JHM History"] "", Accessed August 7, 2008.]

In late 2006, Johns Hopkins Medicine agreed once again to a request from to give unusually wide access to a large team of documentary film makers led by many of the same network producers and journalists who created the award-winning documentary "Hopkins: 24/7" eight years ago. After more than five months in The Johns Hopkins Hospital and Health System facilities working around the clock, the ABC News group went back to New York with 1500 hours of footage. More than 100 Johns Hopkins faculty, residents, nurses, patients and family members gave their consent and participated in the production. Many more of the Johns Hopkins Medicine family worked behind the scenes, off camera and every day to coordinate ABC’s needs while protecting patient privacy and safety. The prime-time documentary was a seven-part series, which aired seven consecutive Thursdays on ABC at 10 p.m. Eastern beginning June 26, 2008. It focused more than the earlier series on young physicians still in training, and on the dramatic work of some nurses. [ [http://hopkins.abcnews.com "Hopkins"] "", Accessed August 6, 2008.] [ [http://www.hopkinsmedicine.org/hopkinsabc/ "Hopkins"] "", Accessed August 6, 2008.]

In 2008, The Johns Hopkins Hospital was ranked as the top overall hospital in the United States for the 18th consecutive year by "".