Notifier
This article is about the company Notifier. For a definition of the word "notifier", see the Wiktionary entry notifier. 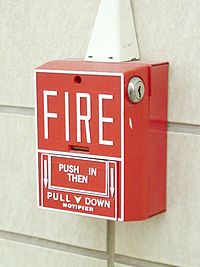 Notifier was founded in 1949 in Waverly, Nebraska by Oliver T. Joy, along with his wife Dr. Margaret Joy, who acted as executive Vice President. The company moved to Lincoln, Nebraska in 1956, and in 1962 was selected to provide the fire detection system for the Seattle World's Fair. The company was sold to Emhart Corporation in 1968 and was acquired by the Pittway Corporation in 1987. Notifier moved to Northford, Connecticut in 1988, and in 1999 Honeywell International, Inc. purchased Pittway Corp., and Notifier became part of Honeywell Life Safety Group.[1]