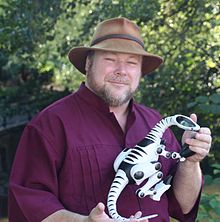 Mark W. Tilden is perhaps best known for his invention of BEAM robotics and the WowWee Robosapien humanoid robot. He is a robotics physicist who produces complex robotic movements from simple analog logic circuits, often with discrete electronic components, and usually without a microprocessor.

Born in the UK in 1961, raised in Canada, he started at the University of Waterloo then moved on to the Los Alamos National Laboratory where he developed robots such as the SATbot which instinctively aligned itself to the magnetic field of the earth, de-mining insectoids, "Nervous Network" theory and applications, interplanetary explorers, and behavioral research into many solar-powered "Living Machines" of his own design. Now in Hong Kong, he currently works as a freelance robotics designer, consultant and lecturer, with many recognizable commercial products through WowWee Toys. His most popular being his biomorphic robot-based items; including B.I.O. Bugs (2001), Constructobots (2002), G.I Joe Hoverstrike (2003), RoboSapien (2004), Robosapien v2 (2005), Roboraptor (2005), Robopet (2005), Roboreptile (2006), RS Media (2006, co-developed with Davin Sufer and Maxwell Bogue), Roboquad (2007), Roboboa (2007), the humanform Femisapien (2008), Joebot (2009), and the Roomscooper floor-cleaning robot (2010). [1].

Mark and his robots have been featured on several television specials, such as "Robots Rising" (Discovery), "The Shape of Life" (PBS), "TechnoSpy" (TLC), "Extreme Machines - Incredible Robots" (TLC), "The Science behind Star Wars" (Discovery), as well as many magazines, newspaper publications, websites, and books. A comprehensive article on Tilden (December-2010) by Thomas Marsh is viewable online through the "Robot" Magazine website. [2]

Mark was a technical consultant for the robot scenes in the 2001 movie Lara Croft: Tomb Raider and his robots have been prominent in many movies including The 40 Year Old Virgin, Paul Blart Mall Cop, X-Men: The Last Stand, and more. His robots are also continuous background props in the TV series The Big Bang Theory.