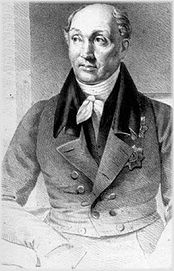 Speransky was the son of a village priest and spent his early days at the ecclesiastical seminary in St Petersburg, where he rose to be professor of mathematics and physics. His brilliant intellectual qualities attracted the attention of the government, and he became secretary to Prince Kurakin. He soon became known as the most competent of the imperial officials.

The most important phase of his career opened in 1808, when the emperor Alexander I took him with him to the Congress of Erfurt and put him into direct communication with Napoleon, who described him as the only clear head in Russia and at the insistence of Alexander had many conversations with him on the question of Russian administrative reform. Speransky's projects of reform envisaged a constitutional system based on a series of dumas, the cantonal assembly (volost) electing the duma of the district, the dumas of the districts electing that of the province or government, and these electing the Duma of the empire. As mediating power between the autocrat and the Duma there was to be a nominated council of state.

This plan, worked out by Speransky in 1809, was for the most part stillborn, only the council of the empire coming into existence in January 1810; but it nonetheless dominated the constitutional history of Russia in the 19th century and the early years of the 20th. The Duma of the empire created in 1905 bears the name suggested by Speransky, and the institution of local self-government (the zemstvo) in 1864 was one of the reforms proposed by him. Speransky's labors also bore fruit in the constitutions granted by Alexander to Finland and Poland.

Downfall under Alexander I

From 1809 to 1812 Speransky was all-powerful in Russia, so far as any minister of a sovereign so suspicious and so unstable as Alexander could be so described. He replaced the earlier favorites, members of the unofficial committee, in the tsar's confidence, becoming practically sole minister, all questions being laid by him alone before the emperor and usually settled at once by the two between them. Even the once all-powerful war-minister Count Arakcheyev was thrust into the background. Speransky used his immense influence for no personal ends. He was an idealist, but in this very fact lay the seeds of his failure.

Alexander was also an idealist, but his ideals were apt to centre in himself; his dislike and distrust of talents that overshadowed his own were disarmed for a while by the singular charm of Speransky's personality, but sooner or later he was bound to discover that he himself was regarded as but the most potent instrument for the attainment of that ideal end, a regenerated Russia, which was his minister's sole preoccupation. In 1810 and the first half of 1811 Speransky was still in high favor, and was the confidant of the emperor in that secret diplomacy which preceded the breach of Russia with Napoleon.

He had, however, committed one serious mistake. An ardent freemason himself, he conceived in 1809 the idea of reorganizing the order in Russia, with the special object of using it to educate and elevate the Orthodox clergy. The emperor agreed to the first steps being taken, namely the suppression of the existing lodges; but he was naturally suspicious of secret societies, even when ostensibly admitted to their secrets, and Speransky's abortive plan only resulted in adding the clergy to the number of his enemies.

On the eve of the struggle with Napoleon, Alexander, conscious of his unpopularity, conceived the idea of making Speransky his scape-goat, and so conciliating that Old Russian sentiment which would be the strongest support of the autocratic tsar against revolutionary France. Speransky's own indiscretions gave the final impulse. He was surrounded with spies who reported, none too accurately, the ministers somewhat sharp criticisms of the emperor's acts; he had even had the supreme presumption to advise Alexander not to take the chief command in the coming campaign.

A number of persons in the entourage of the emperor, including the grand duchess Catherine, Fessler, Karamzin, Rostopchin and the Finnish, originally Swedish general Count Gustaf Mauritz Armfelt, the Minister State Secretary of the Grand Duchy of Finland in St Petersbourg, intrigued to involve him in a charge of treason. Alexander did not credit the charge, but he made Speransky responsible for the unpopularity incurred by himself in consequence of the hated reforms and the still more hated French policy, and on the 17/29 March 1812 dismissed him from office.

1810-1812 Speransky was Chancellor of the Imperial Alexander University in Turku, Finland. Even this office was then given to Armfelt.

Later career under Nicholas I

Reinstated in the public service in 1816, he was appointed governor-general of Siberia, for which he drew up a new scheme of government, and in 1821 entered the council of state.

In 1826, Speranski was appointed by Nicholas I to the head of the Second Section of the Imperial Chancellery, a committee formed to codify Russian law. Under his able leadership the committee's work was fruitful, with the 1833 publication of the complete collection of the laws of the Russian Empire, which contained 35,993 enactments. This codification, called the 'Full Collection of Laws' (Polnoje Sobranije Zakonov), was presented to Nicholas I and formed the basis for the 'Collection of Laws of the Russian Empire' (Svod Zakonov Rossiskoj Imperii), the positive law valid for the Russian Empire. Speransky's liberal ideas were subsequently scrutinised and elaborated by Konstantin Kavelin and Boris Chicherin.

His title of Count was awarded to him in 1839, with his daughter being permitted by special Imperial decree to carry the title into her marriage in the family of Prince Mikhail Cantacuzène.

Speransky died in St. Petersburg on February 23, 1839.He is buried at the Tikhvinskoe Cemetery at the Alexander Nevsky Monastery; his gravestone is a granite sarcophagus with a bronze cross.

Speransky is a character in Tolstoy's novel War and Peace. He can be found in the second book, third part.