Flag of the United States

Old Glory is a common nickname for the flag of the United States, bestowed by William Driver, an early nineteenth century American sea captain.

However, it also refers specifically to the flag owned by Driver, which has become one of the U.S.'s most treasured historical artifacts. 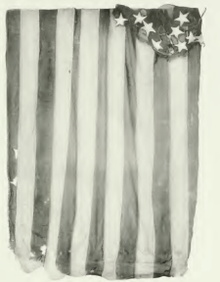 Old Glory was made and presented to the young Captain Driver by his mother and some young ladies of his native Salem, Massachusetts.[1] The year is uncertain, but it was probably sometime in the 1820s. It is a large flag, measuring 10 feet by 17 feet, heavily constructed and designed to be flown from a ship's mast. It originally had 24 stars and, symbolic of its nautical purpose, includes a small anchor sewn in the corner of its blue canton.

The captain was very pleased with his gift, and always kept it with him. By most accounts, he first hailed the flag as "Old Glory," when he left harbor for a trip around the world in 1831-1832, as commander of the whaling vessel Charles Doggett. Old Glory served as the ship's official flag throughout the voyage. Some weathering and fraying almost certainly occurred during this severe service, and the flag shows evidence of patching on more than one occasion.

Driver retired from the sea in 1837 and moved to Nashville, Tennessee. He flew his beloved flag on all patriotic occasions, using a rope suspended across the street, and Old Glory became well known to the citizenry. By 1861, it was modified to show 34 stars (the number of states then in the Union).

When the Civil War broke out and Tennessee seceded from the union in 1861, Driver knew or feared that the rebel government would attempt to destroy the locally famous Old Glory. He had the flag sewn inside a comforter to conceal it. One curious point, never explained, is that he seems to have had this done by some neighbor girls named Bailey, rather than by his own family. Accounts differ as to whether and how hard the Confederate authorities searched for the flag, but in any event it survived. When Union forces retook Nashville the following year, Driver was able to bring out his flag and hoist it from the state capitol spire, the last time it flew from a flagpole. A unit of Federal troops, the 6th Ohio Infantry, was present, and adopted "Old Glory" as their motto. These dramatic events were reported by many newspapers, and Old Glory became nationally famous.

In 2006, the Smithsonian acceded to a request from the Tennessee State Museum to display Old Glory in Nashville once again.[2] Coupled with other Old Glory-related artifacts and memorabilia from the state library and archives, it was shown from March to November, in an exhibit entitled Old Glory: An American Treasure Comes Home.[3] Due to its age and fragility, officials of the Smithsonian stated that after the Nashville exhibit, it will never be permitted to travel again.