The important processes in the atmosphere (Rayleigh scattering and Mie scattering) are elastic processes, by which light can be deviated from its path without being absorbed and with no change in wavelength. 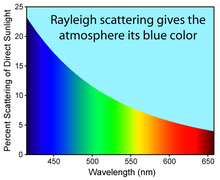 Comparison of the scattering efficiency of blue light in the atmosphere compared to red light.

The sunlit sky is blue because air scatters short-wavelength light more than longer wavelengths. Since blue light is at the short wavelength end of the visible spectrum, it is more strongly scattered in the atmosphere than long wavelength red light. The result is that the human eye perceives blue when looking toward parts of the sky other than the sun.[1] The color perceived is similar to that obtained by a monochromatic blue of wavelength 474–476 nm mixed with white light, i.e., an unsaturated blue light.[2]

Near sunrise and sunset, most of the light we see comes in nearly tangent to the Earth's surface, so that the light's path through the atmosphere is so long that much of the blue and even green light is scattered out, leaving the sun rays and the clouds it illuminates red. Therefore, when looking at the sunset and sunrise, you will see the color red more than any of the other colors.

Scattering and absorption are major causes of the attenuation of radiation by the atmosphere. Scattering varies as a function of the ratio of the particle diameter to the wavelength of the radiation. When this ratio is less than about one-tenth, Rayleigh scattering occurs in which the scattering coefficient varies inversely as the fourth power of the wavelength. At larger values of the ratio of particle diameter to wavelength, the scattering varies in a complex fashion described, for spherical particles, by the Mie theory; at a ratio of the order of 10, the laws of geometric optics begin to apply.

There are three commonly detectable points of zero polarization of diffuse sky radiation (known as neutral points) lying along the vertical circle through the sun.

Under an overcast sky

There is essentially no direct sunlight under an overcast sky, so all light is then diffuse sky radiation. The flux of light is not very wavelength dependent because the cloud droplets are larger than the light's wavelength and scatter all colors approximately equally. The light passes through the translucent clouds in a manner similar to frosted glass. The intensity ranges (roughly) from 1⁄6 of direct sunlight for relatively thin clouds down to 1⁄1000 of direct sunlight under the extreme of thickest storm clouds[citation needed].