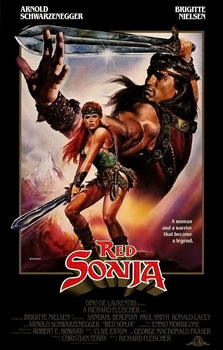 (based on the character by )
starring =

"Red Sonja" is a 1985 / starring with as the title character. It was shot in Italy, on location in and , near Rome, and at the Stabilimenti Cinematagrafici Pontini studios.

The movie begins with Red Sonja's brother and their parents being slaughtered by the evil Queen Gedren ()'s army. Sonja survives being violently raped by Gedren's troops, and even gives Gedren a kind of a souvenir: a brutal scar on the evil queen's face. Later that night, Sonja is visited by a spirit... who grants her the strength to seek her revenge.

The story then jumps to a large temple full of white-robed priestesses. They are getting ready to destroy a large, glowing green orb called the Talisman. This dangerous artifact's destructive power increases from exposure to light and the priestesses intend to destroy it before it gets out of control. However, Gedren – now wearing a gold mask to cover her scar – and her Ikol () attack with their army. The warrior-priestesses resist, but are ultimately subdued by Gedren's forces.

Gedren gets her hands on the Talisman, but not before proving the myth that only women can touch it and survive. Gedren orders the remaining priestesses to be imprisoned in the vault which held the Talisman. One of those priestesses, Varna, manages to escape. She doesn't get far before she's mortally wounded by an arrow in the back. As luck would have it, she literally falls into the arms of the mighty Lord Kalidor (). She begs him to help find her sister, Red Sonja.

Sonja has been training with a Chinese swordmaster () when Kalidor informs Sonja about her sister. Sonja arrives just in time for Varna to tell her about what happened at the temple. Sonja's sister urges her to find the Talisman and destroy it, or else the world will be shattered with storms and earthquakes. Varna then dies and is cremated on a funeral pyre by Sonja...who then starts on her journey to Berkubane, Gedren's Kingdom of Eternal Night.

Just then, Sonja notices a storm off in the distance, indicating someone is using the Talisman. Kalidor offers to help her, but Sonja tells him that she does not need the help of a man. She rides to the now-ruined kingdom of Hablock. There she meets the young Prince Tarn (), a cocky and overconfident brat, and his loyal and robust servant, Falkon (). They confirm that Gedren just departed, having wiped out Hablock and its army with the Talisman because Tarn (being Tarn) refused to surrender. Tarn announces that he is raising a new army to crush Gedren underfoot and invites Sonja to join, since "We'll probably need a cook". Being Sonja, she declines and goes her own way...with Kalidor surreptitiously following her.

Soon she encounters the rogue Lord Brytag (), self-appointed ruler of the mountain passes, who takes an unhealthy interest in Sonja...VERY unhealthy for Brytag himself, because Sonja challenges him to a swordfight instead, and slays him. Brytag's thuggish troops surround Sonja. Just as they move in for the kill, Kalidor suddenly attacks their rear. Sonja escapes, leaving her rescuer behind to deal with Brytag's remaining soldiers.

At Castle Berkubane, Gedren places the Talisman in a room full of candles to increase its strength. Ikol warns her against this, because too much light will give the Talisman more power than can be controlled, but Gedren won't take him seriously. Back in the castle's main hall, they discover that Sonja and her party are approaching. The queen's Wizard shows her Sonja, Tarn and Falkon in a magic screen. Gedren recognizes Sonja and orders that she be brought back to the fortress unharmed. She and Ikol use the Talisman to conjure up a storm, forcing Sonja's band to take shelter in a watery cavern.

Gedren and her Wizard also unleash an "Icthyan Killing Machine" in the cavern. When Sonja and her group try to cross the pond, the monster attacks them. Sonja struggles with the monster, but is unable to find any way to kill it. Kalidor again dramatically appears, leaps into the water and wrestles with the beast while Sonja digs out the eyes. They flee with Tarn and Falkon, leaving the metal monstrosity to thrash blindly about the pond.

Sonja now accepts the company of Kalidor, but also gives him a warning: she will never be with any man unless he can defeat her in a swordfight. That night, Kalidor challenges her and they spar, but neither of them is able to defeat the other. They call it a draw. Kalidor at least wins her heart.

The Talisman's power is growing too dangerous to control, but still Gedren rejects Ikol's counsel to put it in a darker place. Kalidor, Sonja and Falkon infiltrate Castle Berkubane. To protect young Tarn, they trick him into volunteering to stay behind in order to prevent Gedren from escaping.

Sonja has a final confrontation with Gedren, while Kalidor and Falkon deal with her evil guards in the Castle's kitchen/dining hall. Ikol tries to escape with gold looted from Hablock, but is intercepted by Prince Tarn...who engages him in combat, finally crushing the evil lieutenant between the Castle's rolling stone gate.

Back in Gedren's Chamber of Lights, the Talisman's power breaks the floor open, revealing a hellish pit of molten lava beneath the castle. Sonja disarms Gedren and runs her through with her sword, sending the evil ruler plunging to her doom, then casts the Talisman in after her. Immediately, the Talisman's destruction causes a chain reaction that begins to tear Castle Berkubane apart. Our heroes barely manage to escape; Kalidor, at one point, has to hold a couple of pillars on his shoulders...while the others pass underneath. Finally, Castle Berkubane is consumed by a volcano.

At the end, Sonja and Kalidor kiss, while Prince Tarn and Falkon look on and then depart.

In "Conan the Barbarian", played Valeria, a thief and the love of Conan's life. Bergman was offered the role of Red Sonja, but turned it down, choosing instead to play the villainous Queen Gedren. It took almost a year to find an actress "Amazonian" enough to play the title character; in fact, he was still looking eight weeks before the production was due to start, when he saw Brigitte Nielsen on the cover of a fashion magazine. The 21-year-old native of , , who was in Milan on a modeling job, soon found herself on a plane heading for Rome and a successful screen test.

Schwarzenegger had great success in the two "Conan" movies, but his next film, 's "", was a real breakthrough. When De Laurentiis approached Schwarzenegger and asked him to appear in an extended cameo and take second billing in "Red Sonja", the actor agreed out of a feeling of obligation. He worked on the movie for only three weeks, and was very unhappy with De Laurentiis when he discovered he had been given top billing for what was essentially a supporting role.

Film critic/historian called it "Spectacularly silly...Most of the fun is in deciding who gives the worse performance, or ."

Schwarzenegger himself even said "It's the worst film I have ever made." And he joked "Now, when my kids get out of line, they're sent to their room and forced to watch Red Sonja ten times. I never have too much trouble with them."Fact|date=January 2008

Rotten Tomatoes gave the film a score of 17% "rotten" as some critics have called it "Hilariously awful" and "Unwatchably bad sword-and-sorcery nonsense".

"" gave it a scathing entry. The main criticism was that it was a "B-movie" with bad , bad and an entirely display of . In particular, the "Encyclopedia" accuses the movie of being homophobic and for purposely portraying as a negative, trait. Gedren is portrayed as a whose rivalry with Sonja is based partly on the fact that Sonja once rejected her sexual advances.Fact|date=June 2007

A dedicated cult following has grown up around the 'Red Sonja' film.Fact|date=January 2008

At the time acclaimed film critic was to say, "Though it has all the trappings of a B-movie (hammy acting, cheap production values), it also sports a quasi-sexual tone, coming over like something of a pre-history 'Barbarella'. Fleischer creates a vivid atmosphere, using the romantic light of Italy to great effect....one comes out of the cinema feeling that, they probably shouldn't have become as wrapped up in this tosh as they did". Fact|date=February 2007

*A woman and a warrior that became a legend.

*Red Sonja shares many plot elements with , also more popularly known as due to its lampooning on . For instance, in Ator 2, a scientist/wizard guards the Geometric Nucleus (a similar item to the Talisman) when his castle is attacked by the villain. A messenger attempts to warn Ator, who is training with a Chinese sword master, Thong, but is shot by an arrow on the way before falling into Ator's arms. Similarities abound throughout the two films. The director of the Ator series of films, , created the Ator character as an almost direct copy of Conan the Barbarian, and used the Ator movies to cash in on release timing of the Conan movies; the similarities of the second Ator movie and Red Sonja are no doubt related.Fact|date=June 2007
*Sound samples from the movie were later used in the 1987 "Barbarian" by
*Comic book writer and artist , who frequently performed as Red Sonja at conventions and other venues, was considered for the role.
*Spelled backwards, Ikol's name reads "Loki." was the evil and jealous Norse God of mischief and trickery.
*The film's original theatrical trailer is set to several themes (including the main title music) from the soundtrack of the unrelated film "."
*A new "" film is scheduled to be released in 2009. It is being produced by "Sin City" director and will star his fiance as the eponymous heroine, with directing.

*: When Kalidor lifts Prince Tarn into the air with one arm, the wire attached to Tarn's back is visible.
*Continuity: When the surviving girl approaches to the rope over the canyon, there are two meshes. She clutches one mesh and slides down the rope. When her pursuers get to the rope, there are three or four meshes.