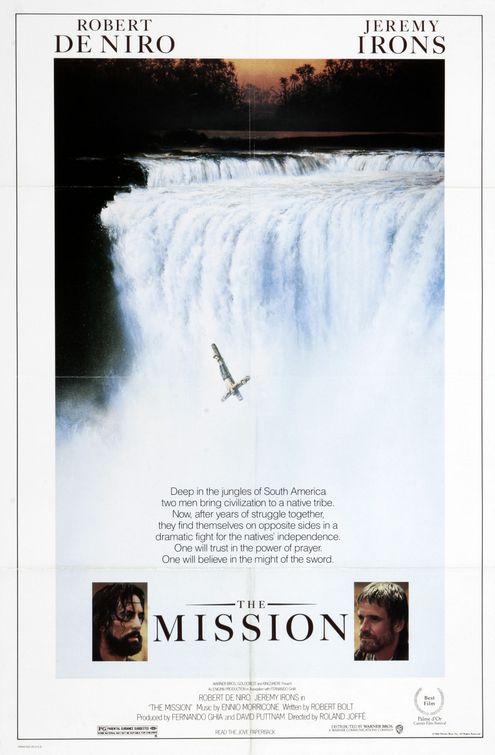 The film is set during the , a program by which Jesuit missionaries set up missions independent of the Spanish state to teach to the natives. It tells the story of a Spanish Jesuit priest, Father Gabriel (Jeremy Irons), who enters the n to build a mission and a community of Indians to Christianity.

He is later joined by a reformed Spanish mercenary, (), who sees the Jesuit mission as a sanctuary and a place of forgiveness for the murder of his brother.

Mendoza and Gabriel try to defend the community against the cruelty of Portuguese colonials (who are trying to enslave the Guaraní under the new powers granted by the Treaty of Madrid), Gabriel by nonviolent means and Mendoza by means of his military training. The mission, which was once under Spanish protection, has been handed over to the Portuguese while the Vatican (represented by Papal emissary Altamirano) has ordered the Jesuits to withdraw from the territory above the falls.

Eventually, a combined Spanish and Portuguese force attacks the mission and, failing to see the simple life of the Guarani as anything but threatening (contrary to Father Gabriel and Mendoza's experiences with them), kill many of them as well as all the priests. Father Gabriel is presiding over Benediction with the Guaraní women and children when he and several of the Guaranís are shot down, while Father Fielding (), is shot dead by a soldier while escaping in a boat with two Indians. Mendoza dies after abandoning an opportunity to spring a trap on the attackers to save Guaraní children on a bridge. This presumably reflects the he had been searching for.

Cabeza and Hontar, the Spanish and Portuguese authorities behind the attack, try to convince the Cardinal that the massacre was justified; the Cardinal feels otherwise. After cutting to a scene of surviving Guaraní children salvaging supplies from the burned mission and a broken violin from the river sailing away on a canoe, the film ends with the Cardinal simply staring at the camera.

"The Mission" is based on events surrounding the Treaty of Madrid in 1750, in which Spain ceded part of Jesuit Paraguay to Portugal. The movie's narrator, "Altamirano", speaking in hindsight in 1758, corresponds to the actual n Jesuit Father Luis Altamirano, who had been sent by Jesuit Superior General to Paraguay in 1752 to transfer territory from Spain to Portugal. He oversaw the transfer of seven missions south and east of the , that had been settled by s and Jesuits in the 1600s. As compensation, Spain had promised each mission 4,000 pesos, or fewer than 1 peso for each of the circa 30,000 Guaranis of the seven missions, while the cultivated lands, livestock, and buildings were estimated to be worth 7-16 million pesos. The movie's climax is the of 1754-1756, during which historical Guaranis defended their homes against Spanish-Portuguese forces implementing the Treaty of Madrid. For the movie, a re-creation was made of one of the seven missions, . [James Schofield Saeger (1995) "The Mission and Historical Missions: Film and the Writing of History." "The Americas", Vol. 51, No. 3, pp. 393-415.]

Father Gabriel's character is loosely based on the life of Paraguayan and .

The waterfall setting of the movie suggests the combination of these events with the story of older missions, founded between 1610-1630 on the above the , from which Paulista slave raids forced Guaranis and Jesuits to flee in 1631. The battle at the end of the movie evokes the 8-day in 1641, a battle fought on land as well as in boats on rivers, in which the Jesuit-organized, firearm-equipped Guarani forces stopped the Paulista raiders. [Saeger, "ibid."]