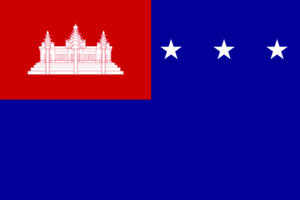 The Cambodian coup of 1970 refers to the removal of Prince and the subsequent elevation of Prime Minister as head of state under the new Khmer Republic (République khmère) government.

Since independence from in , was led by Prince . In , Sihanouk forced the National Assembly to approve a constitutional amendment that made him head of state with no fixed term of office. Sihanouk guided Cambodia into a policy of neutrality during the . In 1965, secret agreements may have been made with North Vietnam and China to allowed communist guerilla forces to operate in the south-east of the country. The agreements also allowed the ports of Cambodia to be used to deliver military supplies to Vietnamese forces. In exchange for the agreement, countries (including China) agreed to purchase rice at inflated prices from Cambodia. Shihanouk internally justified these agreements by saying that the friendship of China and Vietnam would ensure the survival of the Cambodian government in the face of the escalating Vietnam conflict to the east. However, in , the launched an insurgency against the government using the areas occupied by Vietnam as safe base areas. The base areas in Cambodia subsequently provoked American bombing of the region in (). Leftist and rightist factions in the Cambodian government and elsewhere vied for power in this scene of political instability, the radical left with support from North Vietnam fought to overthrow the government while the military right called for the expulsion of Vietnamese and an alliance with the .

ihanouk Deposed as Head of State

In March , while Sihanouk was touring Europe, the and , a mob attacked against the embassy in Phnom Penh. These riots were initially supported by Sihanouk as a demonstration; he hoped Moscow and Beijing, would pressure North Vietnam to reduce its presence in Cambodia. The riots, however, escalated beyond the government's control. In it a contingency plan was found for the s to occupy Cambodia. This further inflamed the government in Phnom Penh which engaged in combat with the Vietnamese and demanded their withdrawal. Instead of returning to Cambodia to confront the growing crisis, Sihanouk continued his tour of communist nations.

On March 16, the Cambodian Secretary of State and police chief, Mannorine, was questioned by the national legislature about corruption occurring under Sihanouk. Worried that prime minister, , was preparing to depose Sihanouk, he attempted to depose Lon Nol only to be defeated by the army and arrested. Lon Nol's deputy, Prince , then advised Nol to remove Sihanouk from the government.

The next day, the army took up positions around the capital. A debate was held within the National Assembly. The assembly had been purged of leftists in the 1960s by Sihanouk and was made up at that point almost exclusively of rightests. One member of the assembly walked out of the proceedings in protest and was not harmed after. The rest of the assembly voted unanimously to invoke Article 122 of the Cambodian constitution which withdrew confidence in Sihanouk. Lon Nol then took on the powers of head of state on an emergency basis, while much of the government of Sihanouk remained the same. This marked the foundation of the Khmer Republic.

The new regime in Cambodia almost immediately demanded that the forces leave the country. The ports of Cambodia were immediately closed to weapons shipments going to the forces fighting . In response, the North Vietnamese Army attacked the Cambodian government forces and greatly increased their support of the . Sihanouk established himself in China and let himself be used as the figurehead for the Khmer Rouge movement to overthrow the government. While Sihanouk had no power over the Khmer Rouge at all, the movement was able to use his name to greatly increase its support in rural areas of Cambodia. The FUNK and GRUNK liberation groups were formed but were nothing but Khmer Rouge fronts. was hard pressed to deal with the opposition as he and his government were corruptFact|date=March 2008 and could not effectively deal with the Khmer Rouge and North Vietnamese Army. The Khmer Republic became dependent on American arms and airstrikes for survival until the air support was cut off by the U.S. Congress in and aid limited thereafter. In April the Khmer Republic came to its end as communist forces captured and evacuated , began the "re-education camps" and of the Cambodian people, and renamed the country "".

Some have accused the of supporting the removal of Sihanouk, but declassified documents indicate that, as late as March , the Nixon administration was hoping to garner "friendly relations" with Sihanouk.