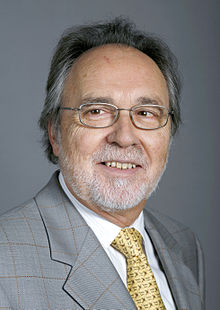 Dick Marty (born January 7, 1945 in Sorengo) is a Swiss politician (FDP.The Liberals) and former state prosecutor of the canton of Ticino. He is a member of the Swiss Council of States (since 1995), and a member of the Parliamentary Assembly of the Council of Europe.

Marty holds a doctorate in law from the University of Neuchâtel with the thesis: "The role and the power of the Swiss judge in the application of penal sanctions" (French: Le rôle et les pouvoirs du juge suisse dans l'application des sanctions pénales).

From 1972 to 1975, Marty worked at the Max Planck Institute for Foreign and International Criminal Law in Freiburg, Germany, responsible for the section on Swiss law.

In 1975, Marty was nominated state prosecutor of Ticino, in which post he was specially noted for his energetic activities fighting organized crime and drug abuse. For his achievements in the area of drug legislation, he received in 1987 an Award of Honor of the United States Department of Justice and a special award of honor by the International Narcotic Enforcement Officers Association. In 1989 he was elected a member of the cantonal executive in Ticino, where he was director of the finance department, and in 1992 additionally held the office of president, which rotates among the members. In 1995, upon being elected to the Swiss Council of States for Ticino, he resigned from his executive post and has since worked part-time as a legal and economic consultant.

In the Council of States he has been member of key commissions, including the Finance Commission and Economy and Taxes Commission, and took an active part in getting the new Swiss constitution through parliament.

Since 1998 he has been a member of the Parliamentary Assembly of the Council of Europe where he is a member of the Monitoring Committee, and second vice-chairperson of the Political Affairs Committee, with further positions in several subcommittees.

Marty acted as Special Rapporteur for the Assembly's Social, Health and Family Affairs Committee on the topic of euthanasia. His report and draft resolution, published in September 2003, called on Council of Europe members to collect empirical data on assisted dying, to promote debate and analysis of the evidence, and to consider whether legislation should be brought forward to exempt doctors from prosecution for assisting suicide in certain strict conditions.[1] His stance proved controversial and the report was criticised by a number of organisations such as the World Federation of Catholic Medical Associations[2] and the Scottish Council on Human Bioethics, [3] and was termed 'Mr Marty's muddle' and accused of 'superficiality' and 'selectivity' by John Keown, professor of Christian ethics at Georgetown University in Washington, DC.[4]

The Committee subsequently adopted a formal Opinion prepared by Kevin McNamara which criticised several of Marty's findings and conclusions and sought to replace the call for governments to consider legislation to legalise assisted dying with a resolution merely to 'report back to the Parliamentary Assembly for further consideration'.[5] McNamara's amendments also drew criticism from organisations such as the World Federation of Right to Die Societies,[6] and Keown's criticism of Marty's report was itself criticised by Guy Widdershoven of Maastricht University.[7]

In the event, Marty's report, even amended, was rejected by 138 votes to 26. Marty said he hoped the issue would come before the Assembly in the future.[8]

In 2005, Marty was appointed to lead an investigation by the Council of Europe into alleged illegal CIA secret prisons in Europe. Marty is planning to use satellite images and aviation logs - among many other sources of information - to find out whether the "rendition" of terror suspects for possible torture, or illegal secret detentions, have taken place in any of the Council of Europe's 47 member states. These activities could be a violation of European human rights standards. In June 2006 a report released by Marty on behalf of the Council of Europe announced that evidence showed that 14 European states had indeed assisted in the perpetration of such abuses.[9][10]

On December 14, 2010, Marty passed a report for adoption to the Council of Europe alleging inhuman treatment of people and killing of the prisoners with the purpose of removal and illicit trafficking in human organs in Kosovo involving Kosovo prime minister and former Kosovo Liberation Army political leader Hashim Thaçi.[12]

Kosovo's leading politicians reacted strongly on Marty's report. Kosovo's acting president, Jakup Krasniqi, has called the report "racist towards Albanians".[13] Prime Minister Thaçi accused Marty of being "an opponent of Kosovo's independence" and called the report "politically motivated", "not based on facts", with the "goal to damage the newly-created state of Kosovo, Kosovo’s image, to question the election process, creation of institutions and Kosovo’s European future". According to Thaçi, it was "an attack directed against two states, Kosovo and Albania and against all Albanians".[14] As reported by several international,[15] Serbian,[16] Kosovan[17] and Albanian[18] news agencies, in an interview for Albanian TV Klan on December 24, 2010, Thaçi threatened to publish a list of Albanians who helped Dick Marty write the report which accuses him of organ trafficking in Kosovo.

Besides his political work, he has been, since 1996, president of Tourism Switzerland; he is the president of the Swiss Scoutism Foundation.