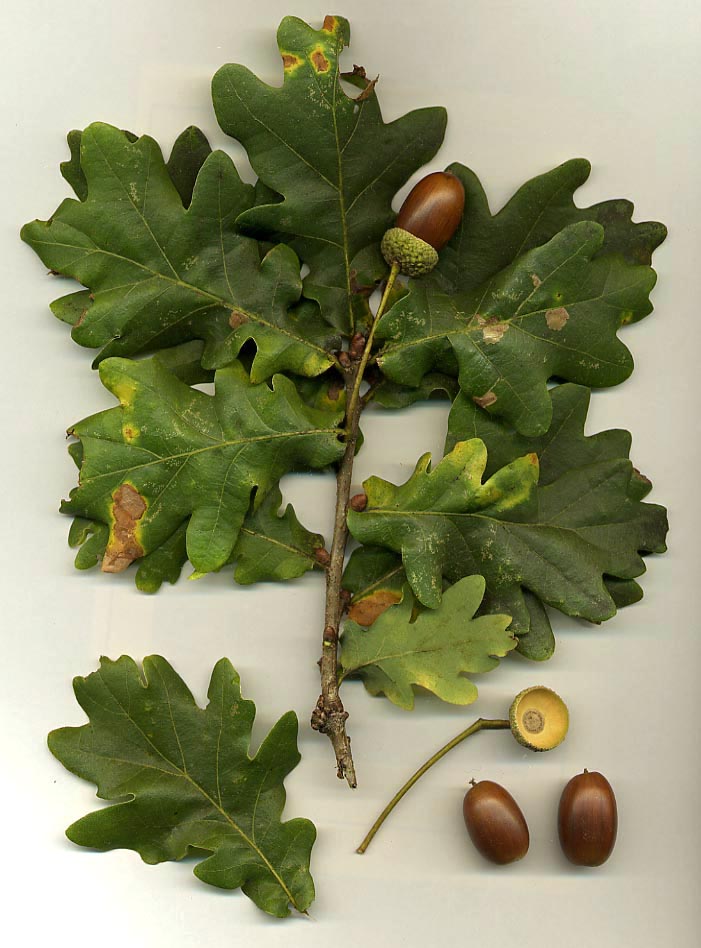 "Quercus robur" (sometimes considered "Q. pedunculata") is commonly known as the pedunculate oak or English oak. It is native to most of , and to to the , and also to parts of .

"Q. robur" ( "quercus", "oak" + "robur" "strength, hard timber") is the type species of the genus (the species by which the genus "Quercus" is defined), and a member of the white oak section "Quercus" section "Quercus". The populations in Italy, southeast Europe, and Asia Minor and the Caucasus are sometimes treated as separate species, "Q. brutia" Tenore, "Q. pedunculiflora" K. Koch and "Q. haas" Kotschy respectively.

A close relative is the ("Q. petraea"), which shares much of its range. "Q. robur" is distinguished from this species by its leaves having only a very short stalk 3–8 mm long, and by its pendunculate acorns. The two often hybridise in the wild, the hybrid being known as "Quercus × rosacea".

"Q. robur" is a large 25–35 m tall (exceptionally to 50 m), with lobed and nearly sessile (very short-stalked) leaves 7–14 cm long. Flowering takes place in mid spring, and their fruit, called s, ripen by the following autumn. The acorns are 2–2.5 cm long, pedunculate (having a peduncle or acorn-stalk, 3–7 cm long) with one to four acorns on each peduncle.

It is a long-lived tree, with a large widespreading head of rugged branches. While it may naturally live to an age of a few centuries, many of the oldest trees are pollarded or d, both pruning techniques that extend the tree's potential lifespan, if not its health. A specimen of notable longevity is one in , which is believed to be approximately 1,500 years old, possibly making it the oldest oak in Europe; another specimen, called the Kongeegen (Kings Oak), estimated to be about 1,200 years old, grows in Jaegerspris, . Yet another can be found in , Kvilleken. It is over 1,000 years old and 14 meters around. [http://www5.h.lst.se/lansfakta/natur/u_nm/rumskullaeken.htm] Of maiden (not pollarded) specimens, one of the oldest is the great oak of Ivenack, . Tree-ring research of this tree and other oaks nearby gives an estimated age of 700 to 800 years old.

Within its native range "Q. robur" is valued for its importance to s and other wildlife. Numerous insects live on the leaves, buds, and in the acorns. The acorns form a valuable food resource for several small s and some birds, notably s "Garrulus glandarius".

It is planted for , and produces a long-lasting and durable heartwood, much in demand for interior and furniture work. The wood of "Q. robur" is easily identified just by taking a closer look at the cross-section perpendicular to fibres. The wood is characterised by its distinct (often wide) dark and light brown growth rings. The earlywood displays a vast number of large vessels (~0.5 mm diameter). Rays which resemble of thin (~0.1 mm) yellow or light brown lines run across the growth rings.

A number of s are grown in arboreta and in s and s. The most common cultivar is "Quercus robur" 'Fastigiata', and is the exception among "Q. robur" cultivars which are generally smaller than the standard tree, growing to between 10-15 m and exhibit unusual leaf or crown shape characteristics.
*"Quercus robur" 'Fastigiata' ("Cypress Oak"), probably the most common cultivated form, it grows to a large imposing tree with a narrow columnar habit. The fastigiate oak was originally propagated from an upright tree that was found in central Europe.
*"Quercus robur" 'Concordia' ("Golden Oak"), a small very slow-growing tree, eventually reaching 10 m, with bright golden-yellow leaves throughout spring and summer. It was originally raised in Van Geert's nursery at in 1843.
*"Quercus robur" 'Pendula' ("Weeping Oak"), a small to medium sized tree with pendulous branches, reaching up to 15 m.
*"Quercus robur" 'Purpurea' is another cultivar growing to 10 m, but with purple coloured leaves.
*"Quercus robur" 'Filicifolia' ("Cut-leaved Oak") is a cultivar where the leaf is pinnately divided into fine forward pointing segments.

Along with the naturally occurring "Q. × rosacea", several hybrids with other white oak species have also been produced in cultivation, including Turner's Oak "Q. × turnerii", Heritage Oak "Q. × macdanielli", and Two Worlds Oak "Q. × bimundorum", the latter two developed by nurseries in the .
*"Q. × bimundorum" ("Q. alba" × "Q. robur") (Two Worlds Oak)
*"Q. × macdanielli" ("Q. macrocarpa" × "Q. robur") (Heritage Oak)
*"Q. × rosacea" Bechst. ("Q. petraea" x "Q. robur"), a hybrid of the Sessile Oak and English Oak. It is usually of intermediate character between its parents, however it does occasionally exhibit more pronounced characteristics of one or the other parent.
*"Q. × turnerii" Willd. ("Q. ilex" × "Q. robur") (Turner's Oak), a semi-evergreen tree of small to medium size with a rounded crown; it was originally raised at Mr. Turner's nursery, Essex, UK, in 1783. An early specimen is at the ; see [http://www.rbgkew.org.uk/plants/trees/turnersoak.html] .
*"Q. × wareii" ("Q. robur fastigiata" x "Q. bicolor"), a hybrid between Upright English Oak and the Swamp White Oak. The Selections within this hybrid include the (Regal Prince) 'Long' [http://buckeyegardening.com/potm0406.html] cultivar and the (Kindred Spirit) 'Nadler' cultivar see with photos.

*The question for 1 s in UK series of Who Wants to Be a Millionaire? was about "pedunculate oak": If you planted the seeds of 'quercus robur', what would grow? A: Trees B: Flowers C: Vegetables D: Grain. The player chose the correct answer and won 1 million pounds.