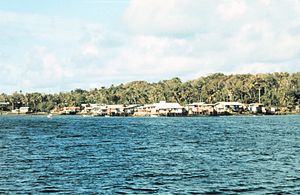 Colonia is the capital of the State of Yap, one of the Federated States of Micronesia. It administers both Yap proper and some 130 atolls reaching to the east and south for some 800 km (500 mi). The 2010 population was 107,154 in both Colonia and ten other municipalities. [1]Colonia has several hotels and a harbor.

A Spanish Catholic mission was established in Colonia during Yap's time as a colony of Spain.[2]

Colonia should not be confused with Kolonia, which is the capital of Pohnpei State.