Mimosa
For other uses, see Mimosa (disambiguation).
Not to be confused with Silver Wattle and Silk Tree, also known as "mimosa".

Mimosa is a genus of about 400 species of herbs and shrubs, in the subfamily Mimosoideae of the legume family Fabaceae. The generic name is derived from the Greek word μιμος (mimos), meaning "mimic."[1]

There are two species in the genus that are notable[citation needed]. One is Mimosa pudica, because of the way it folds its leaves when touched or exposed to heat. It is native to southern Central and South America but is widely cultivated elsewhere for its curiosity value, both as a houseplant in temperate areas, and outdoors in the tropics. Outdoor cultivation has led to weedy invasion in some areas, notably Hawaii. The other is Mimosa tenuiflora, which is best known for its use in shamanic ayahuasca brews due to the psychedelic drug DMT found in its root bark.

The genus Mimosa has had a tortuous history, having gone through periods of splitting and lumping, ultimately accumulating over 3,000 names, many of which have either been synonymized under other species or transferred to other genera. In part due to these changing circumscriptions, the name "Mimosa" has also been applied to several other related species with similar pinnate or bipinnate leaves but now classified in other genera, most commonly to Albizia julibrissin (Silk Tree) and Acacia dealbata (Sattle).

Members of this genus are among the few plants capable of rapid movement; examples outside of Mimosa include the Telegraph Plant, and the Venus Flytrap. The leaves of the plant close quickly when touched. Some mimosas raise their leaves in day and lower them at night, and experiments done by Jacques d'Ortous de Mairan on mimosas in 1729 provided the first evidence of biological clocks.[2] Mimosa can be distinguished from the large related genera, Acacia and Albizia, since its flowers have 10 or fewer stamens. Note that, botanically, what appears to be a single globular flower is actually a cluster of many individual ones. 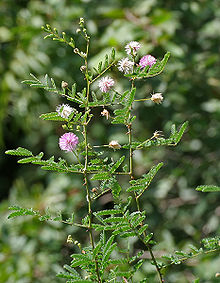 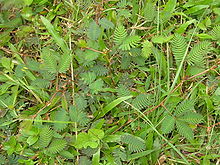 Mimosa prior to a touch 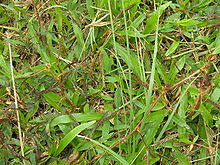 Mimosa with folded-in leaves immediately after a touch

There are about 400 species including: