Mordor
This article is about the location in The Lord of the Rings. For the computer game, see Mordor: The Depths of Dejenol.
"Ephel Duath" redirects here. For the Italian progressive metal band, see Ephel Duath (band).

In J. R. R. Tolkien's fictional universe of Middle-earth, Mordor or Morhdorh (pronounced [ˈmɔr̥dɔr̥]; from Sindarin Black Land and Quenya Land of Shadow) was the dwelling place of Sauron, in the southeast of northwestern Middle-earth to the East of Anduin, the great river. Orodruin, a volcano in Mordor, was the destination of the Fellowship of the Ring (and later Frodo Baggins and Sam Gamgee) in the quest to destroy the One Ring. Mordor was unique because of the three enormous mountain ridges surrounding it, from the north, from the west and from the south. The mountains both protected the land from an unexpected invasion by any of the peoples living in those directions and kept those living in Mordor from escaping. Tolkien was reported to have identified Mordor with the volcano of Stromboli off Sicily.[1]

Three sides of Mordor were bounded by mountain ranges, arranged in a rough rectangle: Ered Lithui, translated as 'Ash Mountains' in the north, Ephel Dúath, translated as 'Fence of Shadow' in the west, and an unnamed (or was possibly still called Ephel Dúath) range in the south. In the northwest corner of Mordor, the deep valley of Udûn formed the castle's gate and guard house. That was the only entrance for large armies, and that was where Sauron built the Black Gate of Mordor, and later where Gondor built the Towers of the Teeth. Behind the Black Gate, these towers watched over Mordor during the time of peace between the Last Alliance and Sauron's return. In front of the Morannon lay the Dagorlad or the Battle Plain.

Within this mountainous castle, Sauron's main fortress Barad-dûr formed its tower, at the foothills of Ered Lithui. To southwest of Barad-dûr lay the arid plateau of Gorgoroth, forming the castle's keep, and Mount Doom its forge. To the east lay the plain of Lithlad. 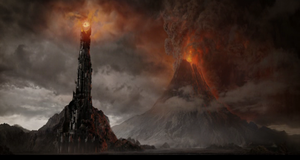 Mount Doom and Sauron's tower of Barad-dûr in Mordor, as depicted in the Peter Jackson film.[2]

The southern part of Mordor, Núrn, was slightly more fertile, and moist enough to carry the inland sea of Núrnen. Núrn was made somewhat fertile because the ash blown from Mount Doom left its soil nutrient rich, thus allowing dry-land farming. Unfortunately, the inland sea of Núrn was salty, not freshwater. Farming in this region supported the armies of Sauron.

To the west of Mordor was the narrow land of Ithilien with the city of Osgiliath (the former capital of Gondor) and the great river Anduin, to the northeast Rhûn, and to the southeast, Khand. To the northwest lay the Dead Marshes.

In the chapters in The Lord of the Rings describing Frodo and Sam's journey in Mordor, the valleys in an area called the Morgai, on the land's "outer marges [...] under the westward mountains", were described as a "dying land not yet dead". The vegetation clinging to life in this area of Mordor included "low scrubby trees", "coarse grey grass-tussocks", "withered mosses", "great writhing, tangled brambles", and thickets of briars. This vegetation grew near water trickling down from higher up the valleys. Sam and Frodo sheltered under a curtain of these brambles, which had long stabbing thorns and hooked barbs. The briars also had thorns, and when Sam and Frodo fell into some briars, Sam said that the thorns feel "a foot long". The fauna described in this area included maggots, midges and flies marked with "a red eye-shaped blotch".

In The Atlas of Middle-earth, Karen Wynn Fonstad assumed that the lands of Mordor, Khand, and Rhûn lay where the inland Sea of Helcar had been, and that the Sea of Rhûn and Sea of Núrnen were its remnants. This assumption stemmed from a First Age world map drawn by Tolkien in the Ambarkanta, where the Inland Sea of Helcar was shown to occupy a large area of Middle-earth between the Ered Luin and Orocarni, with the western end being close to the head of the Great Gulf (later the Mouths of Anduin). The atlas was however published before The Peoples of Middle-earth, where it turned out that the Sea of Rhûn and Mordor existed already in the First Age, thus showing a late revision made by Tolkien towards the ancient geography of Middle-earth. However, the final state of geography devised by Tolkien was ultimately unknown, as virtually no discussion on the relationship between the Seas of Rhûn and Helcar was made in his later writings.

Sauron settled in Mordor 1,000 years after the end of the First Age, and it remained the pivot of his evil contemplations for the whole of the Second and Third Ages of Middle-earth. In the northwestern corner of this land stood Mount Doom or Orodruin, where Sauron had forged the One Ring. Near Orodruin stood Sauron's stronghold Barad-dûr. After this time, Sauron was known as the Dark Lord of Mordor.

For 2500 years, Sauron ruled Mordor uninterrupted. Having wrought the Ring, it was from there that he launched the attack upon the Elves of Eregion. He was repelled by the Men of Númenor. Almost a thousand years later he fought the Númenóreans again; that time, he was captured by the Númenóreans and brought to their island kingdom, eventually causing its destruction (see Akallabêth). Immediately after Númenor's destruction, Sauron returned to Mordor as a spirit (the last of his living being having been bound to the One Ring) and resumed his rule.

The Last Alliance and Third Age

Sauron's rule was interrupted yet again when his efforts to overthrow the surviving Men of Númenor and the Elves failed, and they formed a Last Alliance of Elves and Men whose army advanced on Sauron's land. A great battle took place on the Dagorlad in which Sauron's forces were destroyed and the Black Gate was stormed. The Barad-dûr was then besieged by the Alliance's forces. After seven years of siege, Sauron broke out and was defeated in a final battle on the slopes of Orodruin. After his defeat the Barad-dûr was levelled and great fortresses were built at the entrances to Mordor to prevent Sauron's return. For over a thousand years, Mordor was guarded by Gondor and remained desolate, although the watch was lessened somewhat during the reigns of some of the Kings.

Casualties from the Great Plague, during the reign of King Telemnar, were so high that the fortifications guarding Mordor were abandoned as the troops were called back to Gondor's cities. As the guard slackened, Mordor began to fill with evil things again. The Ringwraiths took advantage of Gondor's defeat in TA 1856 to re-enter Mordor and the final fortresses held by Gondor were abandoned and fell into ruin sometime after TA 1944. In 2002 Minas Ithil was conquered by the Nine Ringwraiths; and the fortifications that were supposed to defend Gondor from the menace inside Mordor were turned into a means of shielding Mordor. By the time Sauron returned into Mordor after his false defeat in Dol Guldur (in the events that took place at the time of Bilbo Baggins's quest), Mordor was protected too well to be captured by any military might that was available in Middle-earth at the end of the Third Age. In the north of Mordor during the War of the Ring were the great garrisons and forges of war, while surrounding the bitter inland Sea of Núrnen to the south lay the vast fields tended for the provision of the armies by hordes of slaves brought in from lands to the east and south.

War of the Ring

During the War of the Ring, Sauron gathered all his forces to Mordor. After the Battle of the Pelennor Fields, a Host of the West went to the Black Gate. In the Battle of the Morannon Sauron sent his army to destroy the Men of Gondor and Rohan, but then Frodo Baggins destroyed the One Ring and Mordor fell. The Dark Tower, the Black Gate and the Towers of the Teeth were destroyed. Mount Doom exploded, clearing the sky over Mordor. Both Sauron and his Ringwraiths were apparently destroyed.

After the ultimate defeat of Sauron, Mordor became mostly empty again as the Orcs inside it fled or were killed. Crippled by thousands of years of abuse and neglect, but capable of sustaining life, the land of Núrn was given to Sauron's freed slaves. Gorgoroth remained desolate in the early part of the Fourth Age.

The armies of Mordor bore upon their armour and shields the red Eye of Sauron on a black field. This was also flown on the banner that accompanied the Lieutenant of the Tower of Barad-dûr when he confronted the emissaries of Gondor.[3]

At the time of the War of the Ring, Sauron had gathered great armies to serve him. These included enslaved Men of the East and the South, who spoke a variety of tongues, and Orcs and Trolls, who usually spoke a debased form of the Common Speech. But within Barad-dûr and among the captains of Mordor (the Ringwraiths and other high-ranking servants such as the Mouth of Sauron), the Black Speech was still used, the language devised by Sauron during the Dark Years of the Second Age. In addition to ordinary Orcs and Trolls, Sauron had bred a stronger strain of Orcs, the Uruk-hai, and very large Trolls known as Olog-hai who could endure the sun. The Olog-hai knew only the Black Speech.[4]

A proposed etymology out of the context of Middle-earth is Old English morðor, which meant "mortal sin" or "murder".[5][6] (The latter meaning was descended from the former.) It was not uncommon for names in Tolkien's fiction to have had relevant meanings in several languages, both languages invented by Tolkien, and actual historical languages. Tolkien was a professor of Anglo-Saxon, so his word roots tended to be Anglo-Saxon/Nordic/Germanic.

Allusions in other works

It was brought up in the third verse of Led Zeppelin's song "Ramble On" amongst other references to The Lord of the Rings.